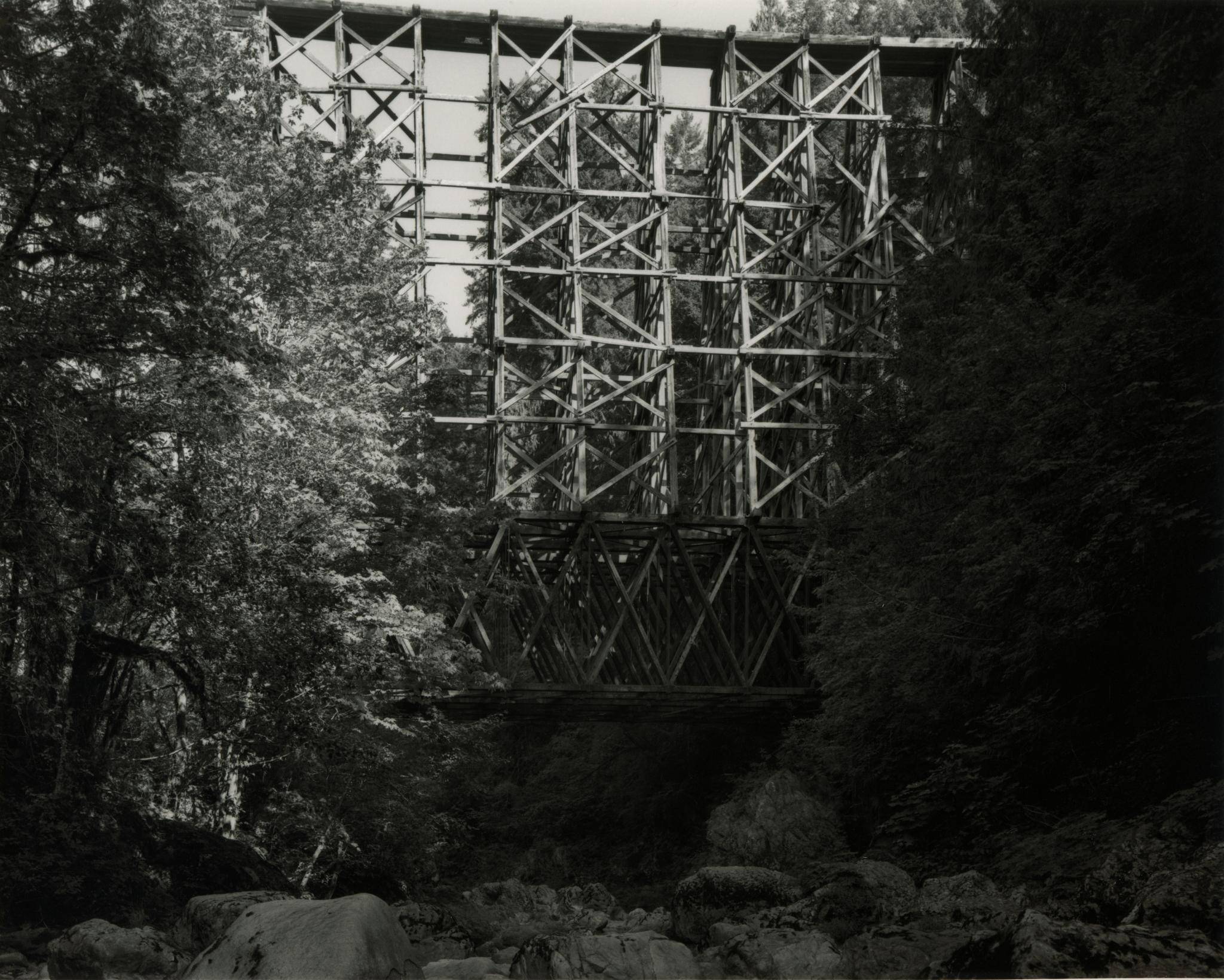 Canadian National #5, 2002. The depiction of the imprint of human activity is reflected in many of Mark Ruwedel’s works. (Courtesy of the artist, Gallery Luisotti/Art 45)

We consume images so voluminously and with such rapidity these days that we often lose sight of the fact that genuine looking is an act of patience. In fact, for some the survey of photographs by 2014 Scotiabank Photography Award-winner Mark Ruwedel up now at Toronto’s Ryerson Image Centre will, on first – and quick – inspection, seem more a test of patience than a testament of its virtue.

And understandably so. How else to react to a selection of mostly black-and-white pictures, almost all entirely people-free, of such seemingly uninvolving subjects as rock-strewn deserts, abandoned rail beds, trestles and logging roads, weather-beaten houses, unprepossessing walk-up apartments and grown-over footpaths, not to mention the vacant geodesic dome that was the U.S. Pavilion at Montreal’s 1967 world exposition and the craters left by bombs dropped from B-24 aircraft on the training grounds of a now-decommissioned air-force base near Utah’s Great Salt Lake?

Yet as we all know, “Once in a while you get shown the light in the strangest of places if you look at it right,” and this exhibition perfectly illustrates that wisdom. It’s a quiet incitement to the art of slow looking, an affirmation of the pleasures gained through heightening one’s powers of discrimination. Smartly assembled by RIC director Paul Roth and RIC head curator Gaëlle Morel, and beautifully installed on walls of grey, the show possesses tremendous cumulative power and conceptual rigour at the same time that it highlights the unity and consistency, in theme and content, of what Ruwedel has framed before his Linhof 4 x 5 view camera in the past 30-plus years. 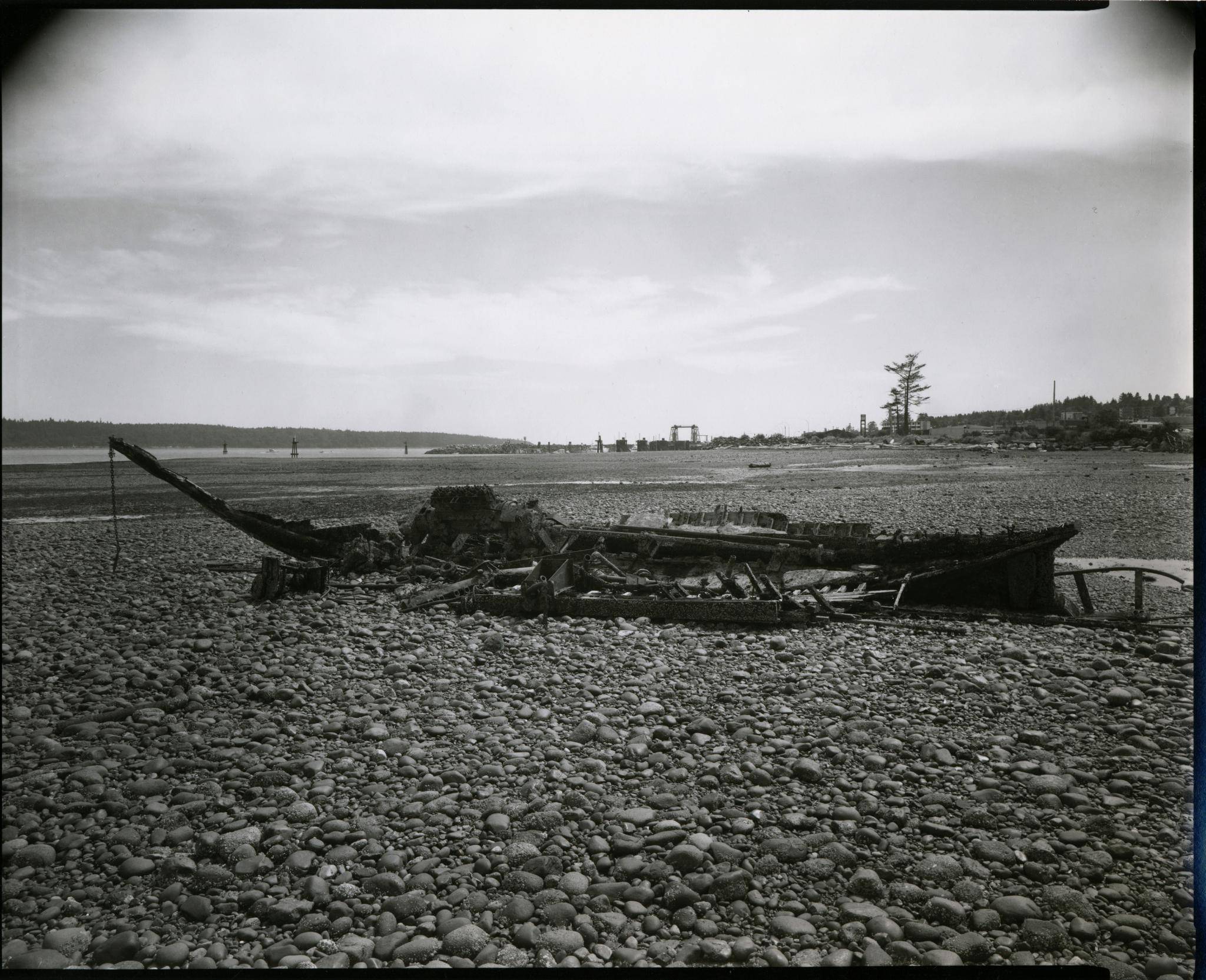 Born in Pennsylvania in 1954, Ruwedel became interested in photography in the final year of his BFA program at Kutztown State College. Graduating in 1978, he travelled to Montreal’s Concordia University, where he earned an MFA in photography in 1983 and where he taught for almost 20 years. Following teaching stints in Nova Scotia and British Columbia, he moved to California in 2002 and now splits his time between Long Beach, where he’s a professor at California State University, and Refuge Cove, B.C., about 150 kilometres northwest of Vancouver. More than 50 museums and galleries worldwide have Ruwedels in their permanent collections.

As the RIC exhibition makes abundantly clear, Ruwedel’s great theme, his epic thrust, has been the depiction of the imprint of human activity, both modest and outrageous, cultural and industrial, on the landscape, particularly the landscape of the American and Canadian West, from pre-history to the present. He likes to structure his work as projects, with each project variously amplifying, expanding from or commenting on the other. One such project, Westward the Course of Empire, for example, started in 1994 and was deemed finished 11 years later while another, Desert Houses, begun in 2002, remains ongoing. 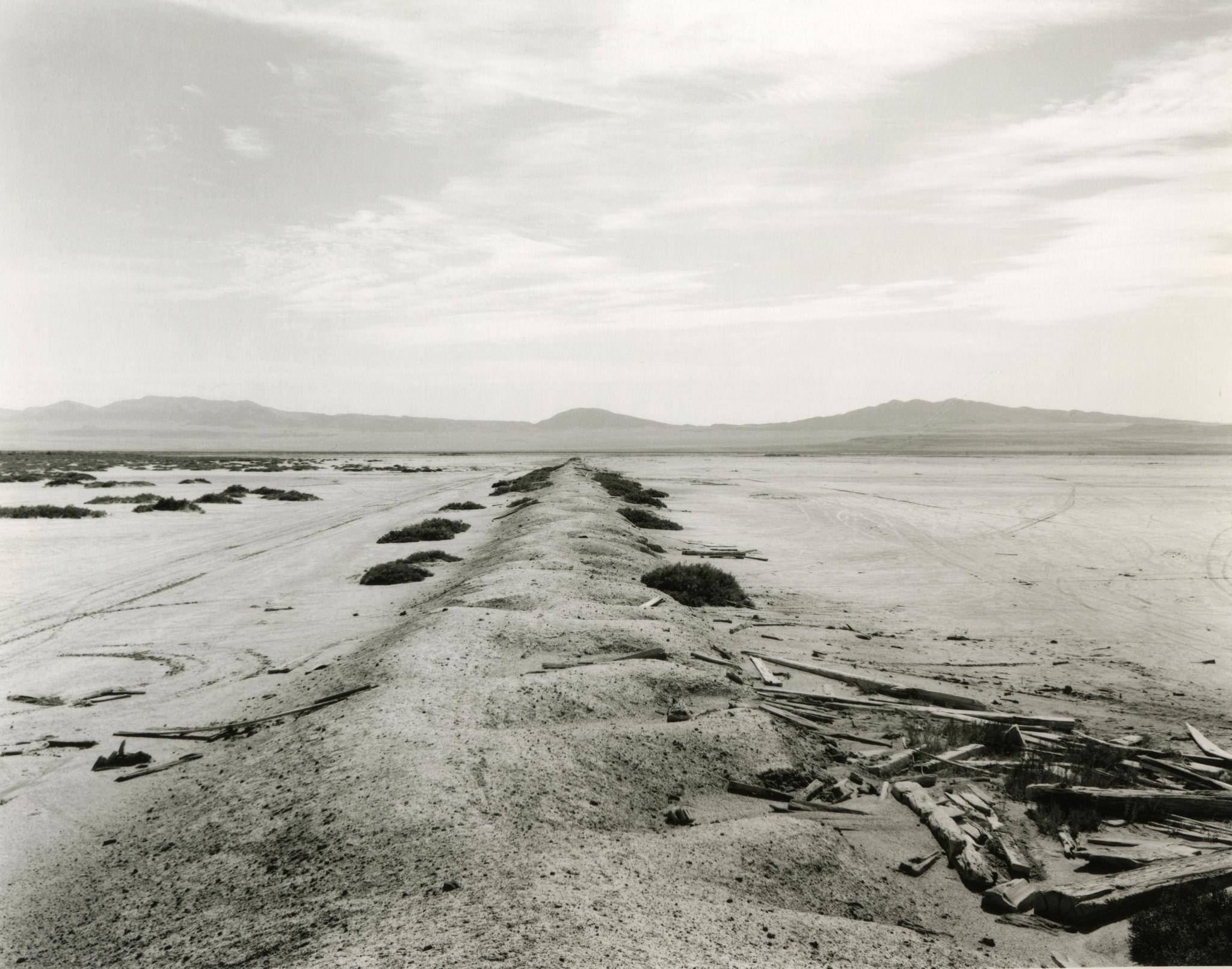 Yes, there is a certain asperity to much of Ruwedel’s content – two 2010 photos of near-identical abandoned bungalows in the desert community of Salton City, Calif., are never going to be featured in House Beautiful – but the photographs themselves are often quite beautiful, distinguished by classical proportions, a formal elegance of presentation. Further, Ruwedel’s careful printing, often on selenium-toned gelatin silver and gold-toned gelatin silver papers, makes each image a lustrous thing in its own right, a celebration of the subtle potencies of the grey-scale.

Undoubtedly, some viewers are going to see Ruwedel’s relic-rich photos as a sobering postscript of sorts to the heroic picture-making of A.J. Russell, Alexander Ross, Timothy O’Sullivan and others of the confident westward expansionism and settlement in the mid-to-late 19th century. There are echoes here, too, of the so-called New Topographic photographers of the 1970s, guys like Robert Adams, John Schott and Lewis Baltz. Similarly, Ruwedel’s interest in taxonomy and types, his fondness for horizons and the matter-of-fact, mid-distance frontal shot, the relentlessness, even mania, of his encyclopedic appetites evoke both the methods and aesthetics of Bernd and Hilla Becher’s five-decade photographic pursuit of the world’s water towers, gas tanks, blast furnaces and grain elevators.

Yet for all that history, Ruwedel also is a profoundly contemporary photographer. This is evidenced not just by his awareness of Conceptual Art strategies – check out the deadpan pictures of 15 walk-up apartments in Los Angeles, collectively titled We All Loved Ed Ruscha (Ruwedel, not coincidentally, has a mutt named Eddie Russia), or the suite of 12 battered 12-inch vinyl LPs shot in the desert between 2009 and 2013 (virtually the only close-ups in the RIC exhibition) – but by the contents of two sets of ink-jet prints. The exhibition’s only colour work, they consist of four images from an ongoing project, started in 2003, called Shelter, and six prints from an another apparent series called Crossing, begun in 2001. 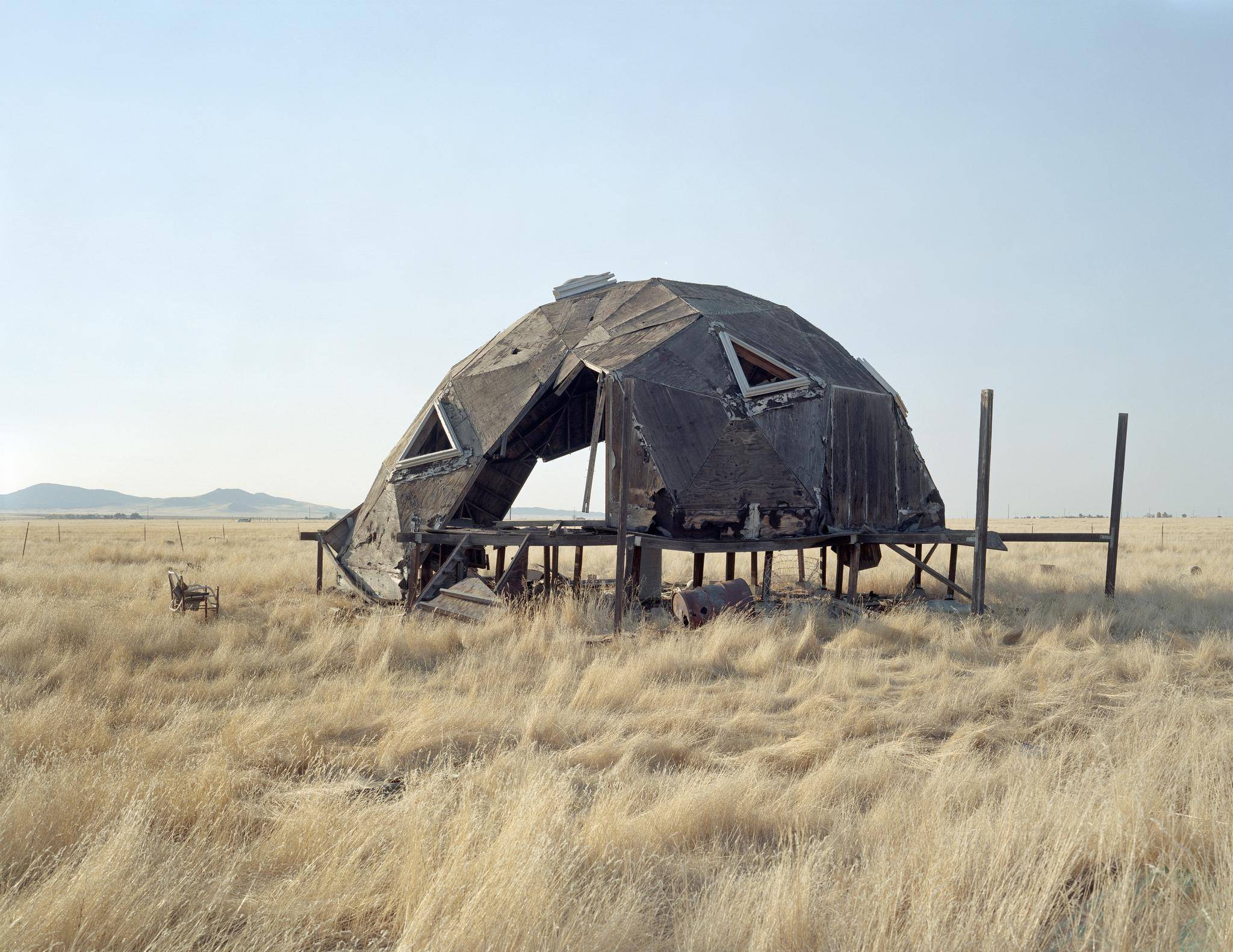 Each set addresses, in a discreetly political, suggestively narrative fashion, an issue at once as fresh and perennial as the contents of a daily newspaper – homelessness and illegal immigration. Shelter’s a collection of pictures of squalid squatter housing in desert communities in California and Colorado, Crossing a quietly powerful presentation of the things immigrants from Central America discard as they risk their entry into border states such as California and Texas – plastic water bottles, backpacks, deflated inner tubes, a passport.

Give yourself over to a prolonged inspection of Ruwedel’s wares. This is a show that sticks to the mind’s eye.

Mark Ruwedel, one of the primary exhibitions at the 2015 Scotiabank CONTACT Photography Festival in Toronto, is at the Ryerson Image Centre, 33 Gould St., through June 28 (scotiabankcontactphoto.com). A book of Ruwedel’s photographs, titled simply Mark Ruwedel, has just been published by the German art imprint Steidl and contains much of the work in the RIC exhibition.