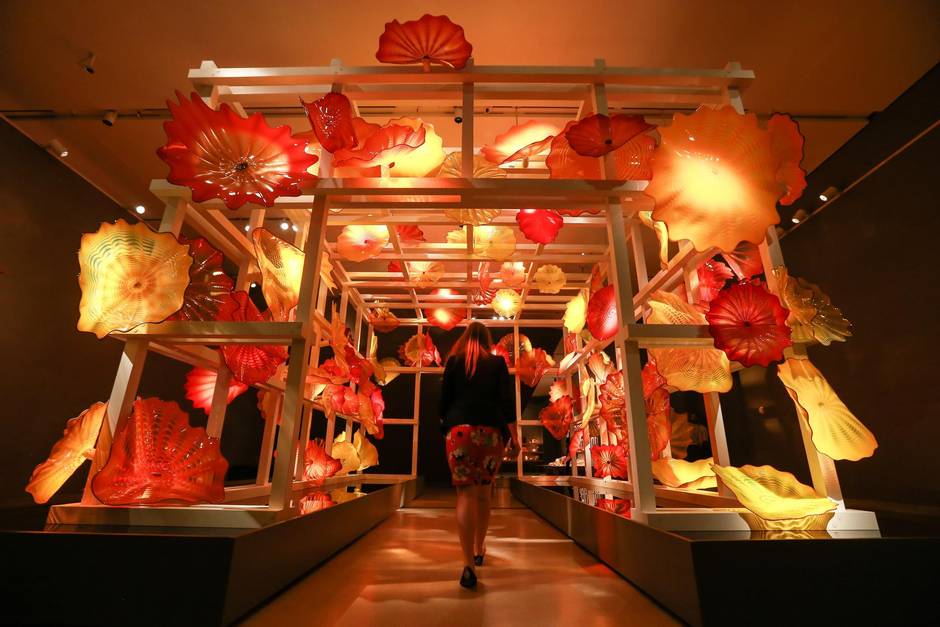 Dale Chihuly's works, on display at the ROM, are sensational but not thought-provoking. (Photos by Glenn Lowson for The Globe and Mail)

If I was to say that Dale Chihuly is the Donald Trump of glass art, would you call that a cheap shot?

Please don’t. I’m not saying there’s anything racist, sexist or xenophobic in the Chihuly oeuvre; rather, I’m suggesting the oversized, showboating qualities of that art can accurately be described as “Trumpian.” Further, as Trump becomes more and more the standard by which we measure all things, why not art? Both Trump and Chihuly, after all, blow hard for a living – Trump because he thinks he can topple Hillary Clinton by hot air alone and ride the bombast into the White House; Chihuly because he must actually expend a mighty wind to create the pop baroque confections that in the past 40 years have made him the world’s best-known glass artist.

Trump’s hair alone incarnates the pop baroque, its dramatic effects, curving forms, elaborate ornamentation and “expressive dissonance” the personification of the Chihuly sculptural aesthetic. By the same token, aren’t Chihuly’s overblown creations the sort of art you imagine the Donald would produce, should he ever abandon the microphone for the glass pipe and the blow-torch?

It’s true Chihuly, who turns 75 in September, hasn’t done any blowing himself since 1979 when a body-surfing mishap dislocated his shoulder, rendering him unable to hold a glass pipe. But such are his fame and his revenue streams that legions of assistants have taken up the slack to huff and puff at his direction. Today, pieces bearing the Chihuly imprimatur can be found in a staggering number of venues, from clinics and casinos to conservatories and galleries, the Metropolitan Museum of Art and the Louvre among them. If there isn’t a Chihuly in the lobby of Trump Tower, there should be. 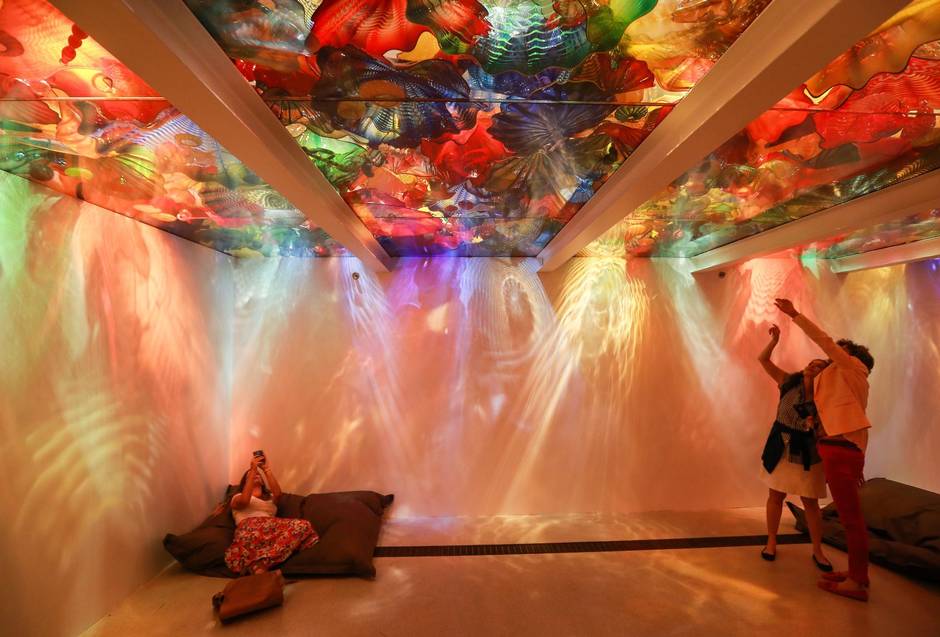 Some visitors to the ROM will enjoy the fun and brightness of the exhibit.

In the meantime, there’s a lot of Chihuly being served at the Royal Ontario Museum in Toronto. You can find it downstairs in the vast Garfield Weston Exhibition Hall which, until early January, 2017, will be hosting what’s billed as the first-ever Chihuly showcase in a major public institution in Toronto. The ROM, which already has two surprisingly modest-sized Chihulys in its permanent collection, has pulled together eleven “installations” in association with Chihuly himself, curated by Diane Charbonneau, curator of modern and contemporary decorative arts at the Montreal Museum of Fine Arts. The whole shebang is called, simply, Chihuly. (Or, as is the ROM’s typographical wont, CHIHULY. My preference would have been I, Dale.)

It’s a sensational show – albeit in the pejorative sense of sensational. Meaning: Full of Teletubby colours and flash and bigness and strange shapes drawn from some Baudelairean fever dream or the remnants of an explosion on the set of Pee-wee’s Playhouse. Meaning: Almost always relentlessly immodest, forever straining to elicit a slack-jawed “Wow” from the spectator. Meaning: Visually noisy, superficial, bereft of genuine nuance and subtlety, provocative but not thought-provoking.

In saying this, I know, of course, that someone is bound to break out a variation of the old “50 Million Elvis Fans Can’t Be Wrong” retort. Clearly Chihuly has his devotees. Just as clearly, there’s long been a strain of what could be called athleticism in the arts – the goad and the goal to be the fastest, the loudest, the longest, the biggest. Think Maynard Ferguson blowing those triple high Cs, or whatever they’re called, on his trumpet; Alvin Lee flying up and down the fretboard at Woodstock ’69; tenorist Paul Gonsalves’s 27 choruses on Ellington’s Diminuendo/Crescendo in 1956; Levine Flexhaug knocking off eight landscapes in less than 20 minutes. But to build pretty much an entire aesthetic on the bright, the bold and the garish, as Chihuly has done, is wearying, the triumph of technique over taste. 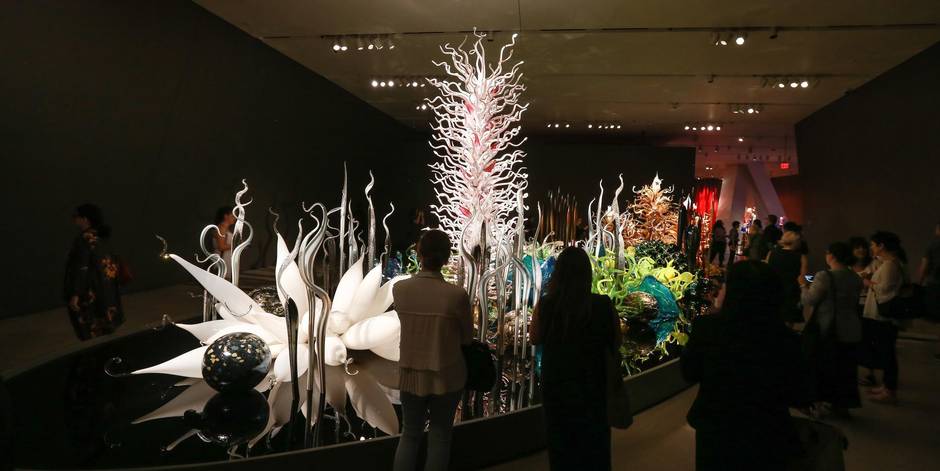 The ROM's show is being billed as the first-ever Chihuly showcase in a major public institution in Toronto.

The ROM show has four works ostensibly readied or specifically conceived for the institution – Persian Trellis, Red Reeds on Logs, Five Orange Baskets, Icicle Towers and Chandeliers. But none feels that specific or special. Rather, it feels as if these baubles just happened to come off the Chihuly “assembly-line” in Tacoma in time to be sent here rather than to that mall in Bal Harbour or the hotel lobby in Dubai.

Glibness abounds. Red Reeds on Logs is just that – two installations of six or seven birch logs each, scattered on the floor, with more than 30 tapers of cherry-red glass, some stretched to almost three metres in height, sprouting from the timber. Jerusalem Cylinders (1999-2012) consists of seven opaque cylinders, varying in height from 30 to 75 centimetres, mounted on pedestals, with chunks of coloured crystal stuck to their sides or balanced on the tops – representative, we’re told, of “the massive stones that make up the walls of Jerusalem’s ancient Citadel.” Tucked in just behind ROM’s main entrance, in the Hyacinth Gloria Chen Crystal Court, there’s Lime Crystal Tower (2006), a tree trunk, four metres high, its branches festooned with 120 small crystal-like boulders of coloured plastic weighing, in total, 135 kg.

Some visitors no doubt will find it all great fun and, as the leaves drop from the trees and colour leaches from the Ontario landscape in November, a welcome jolt of brightness.

But doesn’t one expect something more from the ROM, a serious, publicly funded institution with the professed dual mission of presenting “the record of nature through countless ages” and “the arts of man through all the years”? For an exhibition that will be up almost a half-year, Chihuly is remarkably skimpy on circumstantial material. There’s no catalogue specific to the show nor monograph of essays, while the didactic panels in the exhibition proper rarely go beyond the perfunctory. It all seems like a missed opportunity for the sort of sustained engagement or critical reframing or at least deepened understanding you expect from a museum that’s been around more than 100 years.

Chihuly is at the Royal Ontario Museum in Toronto through Jan. 2, 2017.

An earlier version of this story said that Jerusalem Cylinders in the Dale Chihuly glass art now at the Royal Ontario Museum range from 30 to 75 metres. In fact, they are in centimetres.