When David Altmejd represented Canada at the 2007 Venice Biennale, he considered his piece, The Index, a synthesis of his first seven years as a sculptor. For his new retrospective, Flux, at the Musée d’Art Moderne in Paris, he felt compelled to scratch that same itch. “I joke that every seven years, I need to make a piece that incorporates everything I’ve done as a way of taking a pause and stepping back.”

Enter The Flux and the Puddle, a Plexiglas-enclosed scene packed with so much material and personal meaning that the lavender juice seeping out from a crevice (hence the name) attests to its surplus of epicness. Until now, Altmejd had never situated his recurring characters – the werewolf, the bird-headed man, the bodybuilder – in a single self-contained space. Other motifs – infinitely reflective mirrored nooks, marching plastic ants, furry primate arms, synthetic flowers, plaster bananas, undecipherable bits of moulded matter – are stuffed in there, too. 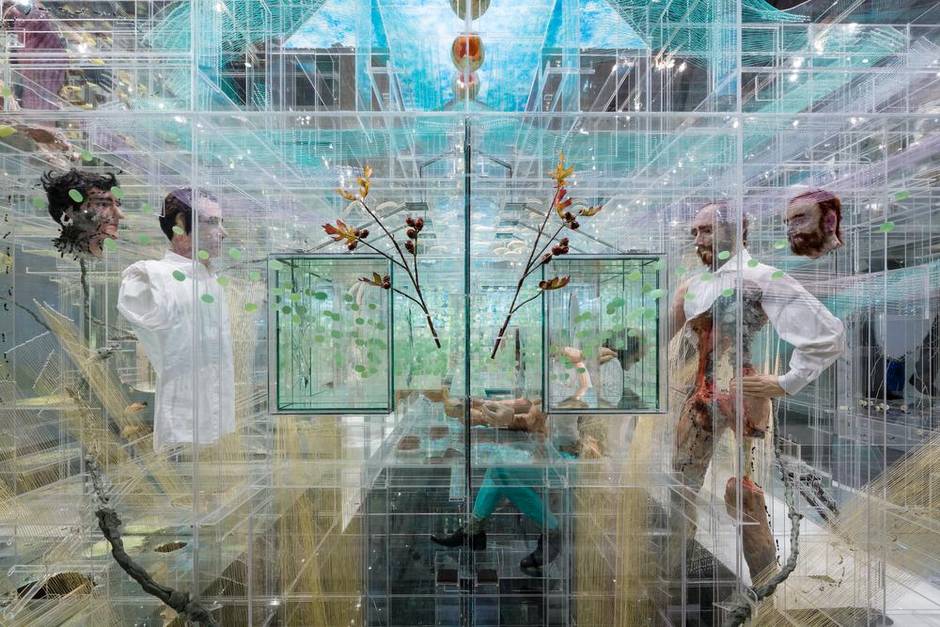 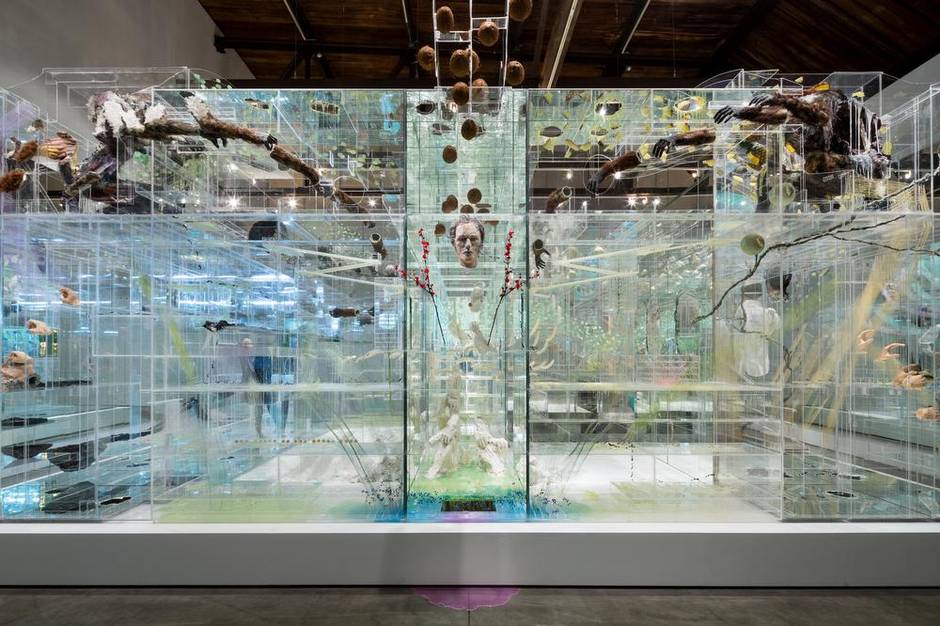 The Flux and the Puddle, 2014 (James Ewing/Andrea Rosen Galler)

“I wanted to combine them all in a structure without knowing how they would interact, but intuitively thinking that maybe they would create some big drama about wars and sex,” he says, describing his intention as “operatic” in scope. “As I worked on it, all of them became fragmented and the whole thing became really abstract.”

The exhibition opens with one of his earliest and most provocative works, Sarah Altmejd (2003). The ponytailed head signifies a conflated family portrait, with a crystal-edged void replacing the face. “It’s quite shocking,” he admits of the sculpture, which belongs to his father and is among one of the few Canadian contributions in the show. “It can be a metaphor for nothingness, like the universe the second before the Big Bang, just before everything began.” 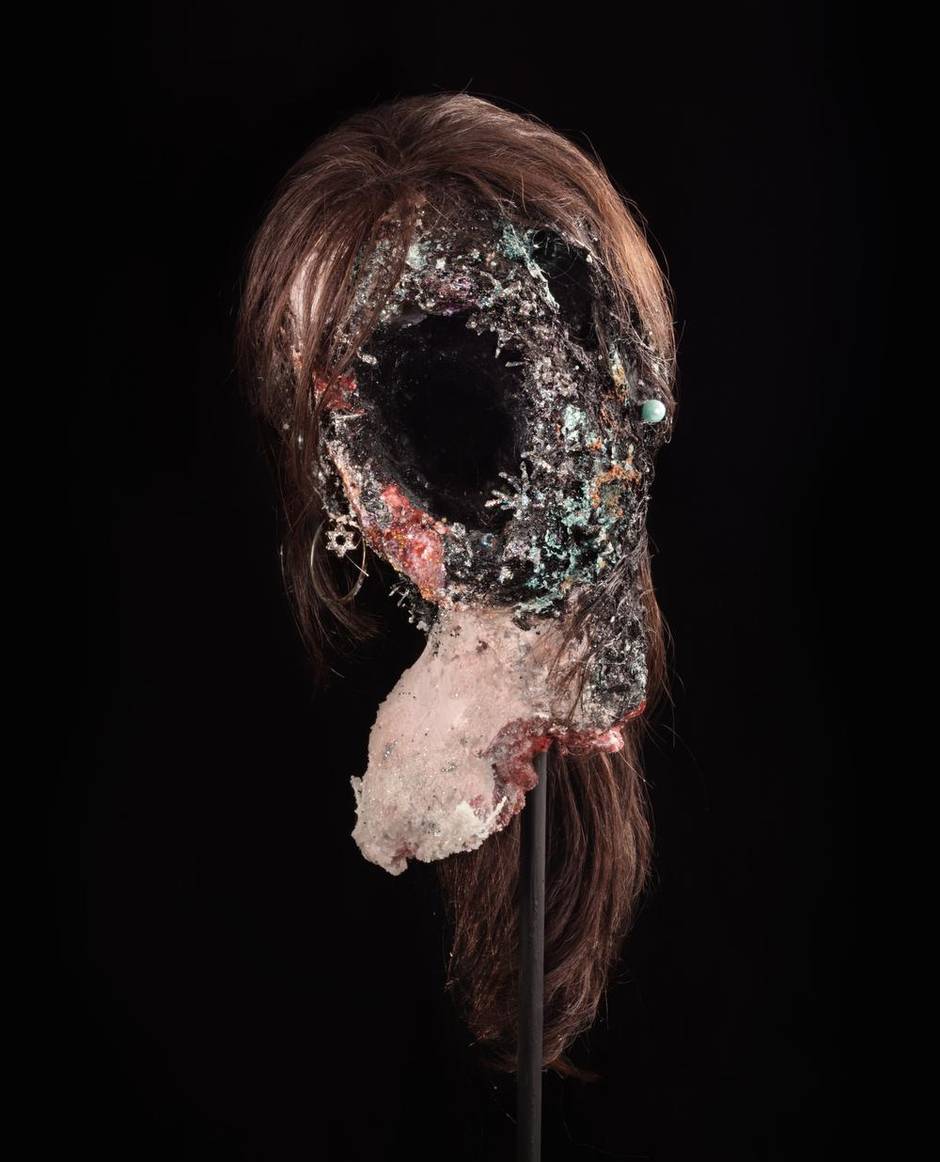 While touring the upper gallery of the museum, where five of his giant grotesques stand like sentinels, Altmejd notes how experiencing the sculptures as a collection helps dispel the notion that his style is violent. “If I rip apart a body, it’s a way of creating energy or digging to look for something,” he says. “I like to play with that confusion.” 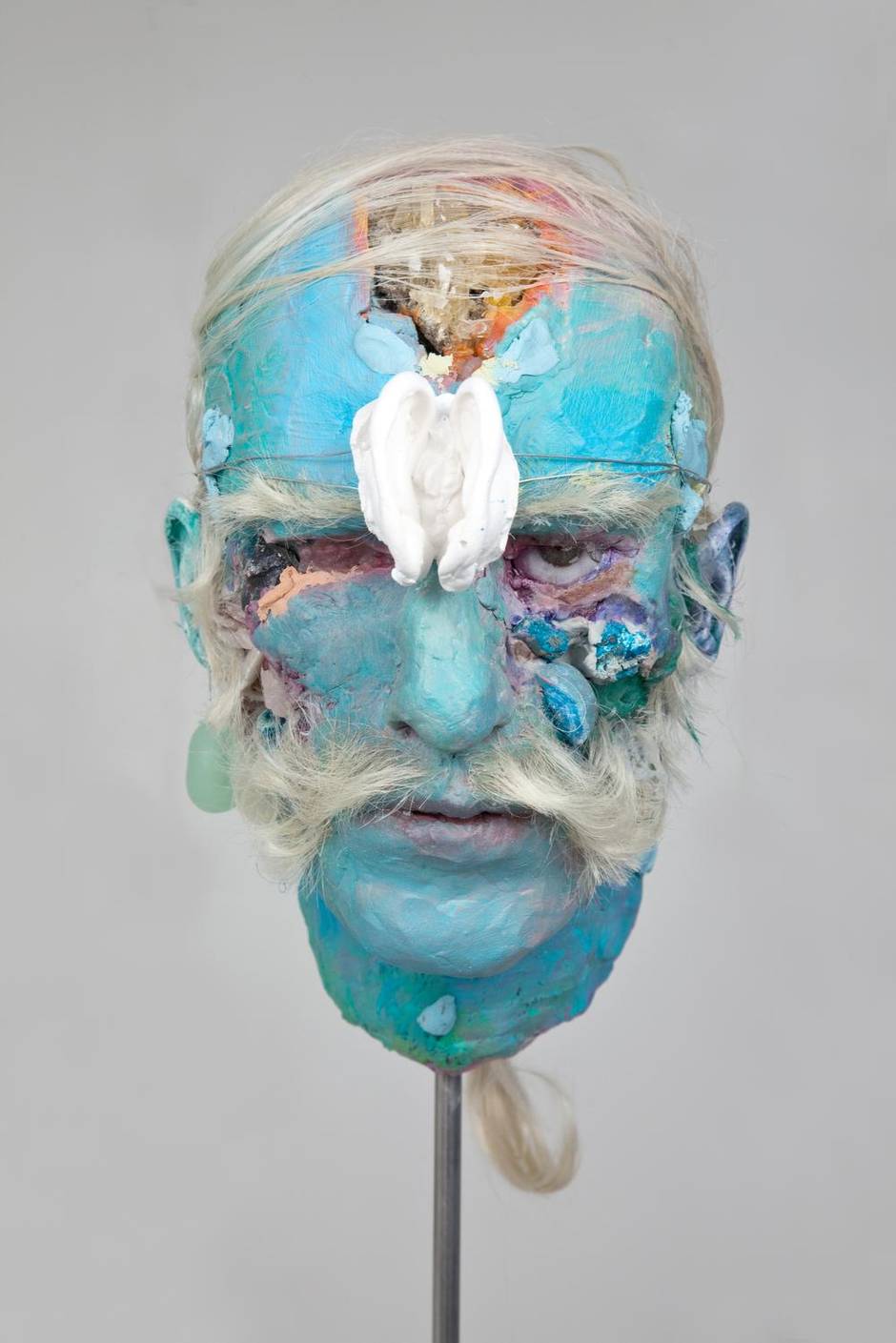 Altmejd, who grew up in Montreal but has been living in New York since pursuing his MFA at Columbia, does not work from maquettes or prototypes. “Can you imagine if I did? If these were predesigned, I could never make them; they would be so technically complicated. This is just built one little thing after another,” he says, kneeling in front of Le Souffle et la voie, one of his first Plexiglas boxes populated with swan-head forms, to show how he positioned the small transparent spools wrapped with fluorescent thread.

The Musée d’Art Moderne invited Altmejd to create a new work that would be stationed on the wide stairway leading up to the salle d’honneur with its wall-to-wall mural, The Electricity Fairy, by Raoul Dufy. He returned with a sculpture in the classical style that conjures up The Winged Victory of Samothrace from the Musée du Louvre, which was recently unveiled after an extensive renovation. Unlike The Flux and the Puddle, its statement is pure and its gesture without ambiguity. Says Altmejd, “I wanted to do something welcoming.” 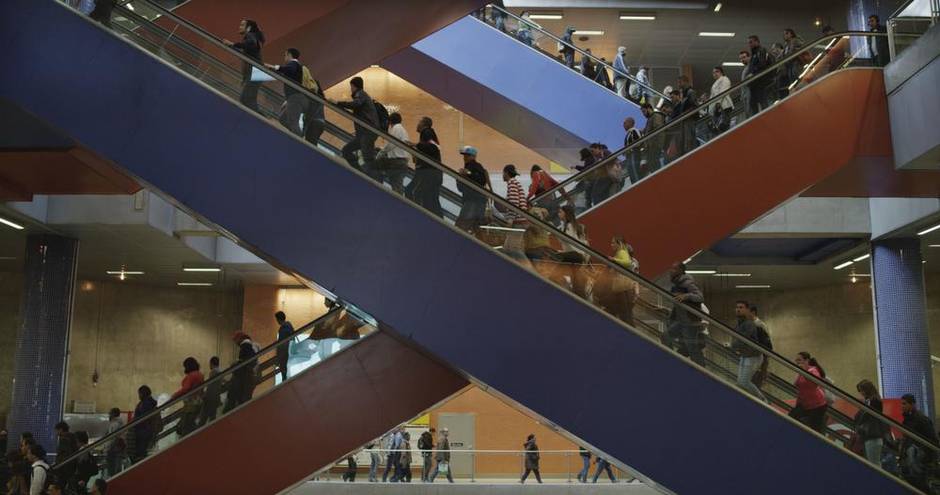 Incidentally, The Winged Victory figures prominently in four new films from Canadian Mark Lewis, who is the latest among an elite group of contemporary artists invited by the Louvre to interpret the museum and its masterpieces as they wish.

The series begins with an inverted view from within I.M. Pei’s courtyard Pyramid; followed by an extremely close encounter with Chardin’s Boy with a Spinning Top (circa 1737); then an eerie visit to the Greek and Hellenic sculpture wing at night (the Venus de Milo’s S-curved silhouette haunts the background); and finally the longest film, in which the camera seemingly soars through the galleries, pausing in front of The Winged Victory, gliding through the early Renaissance and French neoclassicism before flitting briefly past the Mona Lisa.

Lewis willingly reveals that the technical feats resulted from computer animation. “What particularly interested me was working digitally; it’s becoming a central part of the cinematic experience. The difference between the moving image and still image has dissolved,” explains the London-based filmmaker. Indeed, the sequencing of photographs and integration of 3-D modelling contributes to a mediated effect that falls somewhere between hyper-dimensional and strikingly unreal. “The uncanniness saves it from being a simulacrum of the real,” is how he explains it, shooting down any speculation about drones inside the Louvre.

As for entering the Salle des États, the most crowded room in the museum, only to barely acknowledge the most famous painting in the world, Lewis replies, “You can’t see it anyway so what’s the point?” noting that its beauty, as well as the splendour of the nearby works from Veronese and Titian, are “overwhelmed by the volume of traffic.”

This density and the range of human behaviour – whether direct stares or selfies – removes the loftiness inherent to such a hallowed cultural institution and offers a counterpoint to the work Lewis presented at the Venice Biennale in 2009. Yet as much as he enjoyed having all-access, he jokes that he has no intention of a sequel series. “I’m definitely Louvre’d out.”