This is one of those things that happens when you’re an actor and you become famous: You go into a store and you see someone you’ve dealt with all the time, and you realize things are different now. Some years ago – this was probably 2008 or so, a little after she blew up in the spiky indie comedy Juno – Ellen Page dropped in to one of her favourite stores, the ecofriendly boutique P’Lovers in Halifax, where she’d grown up and was still living, and a staff member she knew suddenly pushed a copy of the Jean Hegland novel Into the Forest into her hands. “She just said to me, ‘Oh, you really need to read this book, I think you’d really like it. And also I think it could make a good movie.’

“I was sort of like – Oh, yeah. Yeah,” Page recalled the other day, affecting an underwhelmed response.

“Then I read the back of the book and I was, like: ‘Wow. This sounds great!’”

Page moved away within the year, relocating to Los Angeles like so many Canadian actors before her and since. There were more cheeky indies to shoot – such as Drew Barrymore’s roller-derby drama Whip It, and the droll Super – and glossy Hollywood tent poles to help hold up, such as the mind-bending Inception and her second entry in the X-Men franchise.

But that moment in Halifax sparked something for Page. And it wouldn’t be an exaggeration to say that it led her, years later, to come home to Canada to make a film last year, marking her debut as a producer, and then to introduce it this Saturday night in its official world premiere at the Toronto International Film Festival. 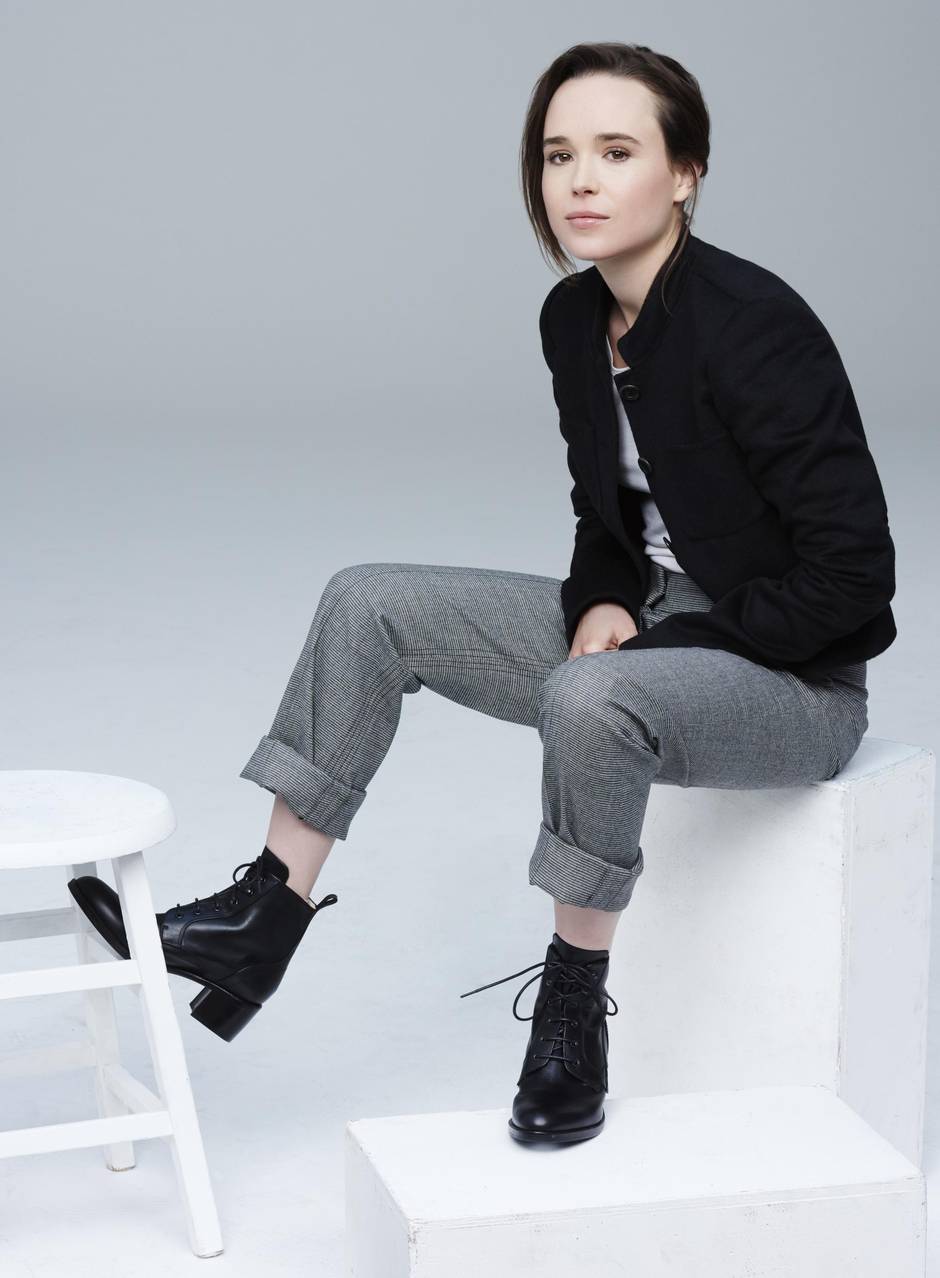 Ellen Page is marking her debut as a producer with Into the Forest. The film will be introduced at TIFF in its world premiere Saturday night. (Photo by Pamela Hanson)

In fact, it may feel as if Page owns this weekend at TIFF: On Sunday night, the festival will present the world premiere of Freeheld, a based-on-a-true-story weepie in which she plays the domestic partner of a New Jersey lesbian detective dying of cancer (Julianne Moore) who fights the system so that her lover might be legally entitled to her pension benefits.

But if that latter drama is especially close to her heart – Page, after all, came out of the closet with a powerfully moving speech on Valentine’s Day, 2014, and has quickly become a high-profile advocate of LGBT rights – it is Into the Forest that marks a professional turning point. After she came home from P’Lovers all those years ago, she read the Hegland novel and immediately set out to acquire the film rights, hiring the Canadian filmmaker Patricia Rozema (I’ve Heard the Mermaids Singing, Mansfield Park) to adapt the novel and direct the movie.

“I’ve been working since I was 10 years old,” says Page, now 28, on the line from her home in Los Angeles. “There was just something I personally needed to challenge myself with. Just add an extra dimension to keep that excitement and ambition and inspiration alive. That was a big reason I wanted to produce.”

Into the Forest is a spellbinding mood piece about two sisters living on the West Coast, about a half-hour drive from the closest town, who must struggle to survive after the North American power grid goes down. Page and her co-star Evan Rachel Wood are by turns restrained and raw, hesitant and heroic. And while there are metaphors aplenty here for those who seek them – the tenuousness of civilization, the power of women to forge a new and uncharted future for humanity – the film takes its cues from the primal old growth forest that surrounds the sisters rather than an academic’s interpretation of what it all means. 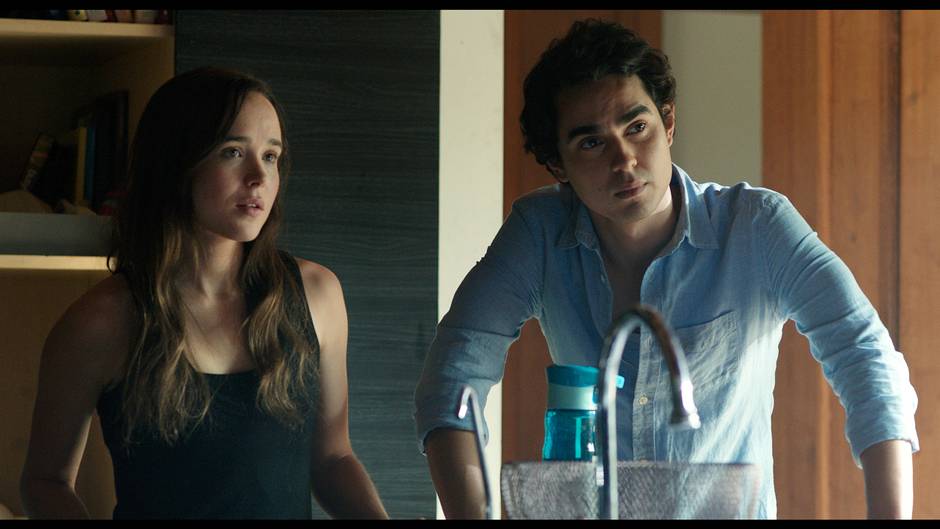 Ellen Page both stars in and makes her producing debut with Into the Forest, adapted from a Jean Hegland novel. (Photo by Patricia Rozema)

Which is not surprising, given why Page was first drawn to the material. Around the time she read the novel, she says, “I went to Oregon and had the lovely opportunity to stay on an ecovillage for a month, and take a permaculture design and ecovillage development course. That was just a huge part of my life at that time. I’d gone through a lot of transition, in regards to being an anonymous person to not an anonymous person. There was, you know, a desire to explore other things, probably to feel really connected and grounded.”

But though she and business partners tried for years to raise funds for the film, they kept hitting a wall. Eventually, Rozema reached out to Niv Fichman, an old friend who runs the Toronto production company Rhombus Media. Someone else brought in the Vancouver-based Bron Studios. The government fund Telefilm was tapped for $2.6-million, and last summer the cameras rolled.

“That’s one of the huge benefits of Canada – it’s the same in England and a lot of other countries around the world as well – is this amazing opportunity and amazing program to allow people to get funding to make films. It’s absolutely fantastic, because it can be really hard to get funding for an independent movie, particularly one that stars two women.”

Page points out that the last certifiably Canadian film she shot was Bruce McDonald’s 2007 drama The Tracey Fragments. She reveres her time on Wilby Wonderful and Marion Bridge, two films she made as a teenager that she says helped her grow considerably as an actor. “I hope to make more in Canada. That would be really ideal.”

While the politics of Into the Forest are below-the-radar, Freeheld has a specific agenda – which is to say, advocating for full equality for LGBT people – and will therefore be received by some as agitprop. Page, though, says it is the material, rather than the politics, that attracts her. “I think it’s just those are the scripts that I happen to read that excite me, you know? It’s definitely not some conscious choice.”

Still, off-screen she has become an ardent champion of LGBT rights: Last month, she hit the headlines when, during a shoot for a Vice Media series she’s hosting on gay rights around the world, she confronted the Republican presidential candidate Ted Cruz during a state fair about his stance on the issue. “It went exactly how I’d expect,” she says, sounding a little deflated by the lack of genuine dialogue in politics.

“I feel like, in those situations, unless you get to sit down and do a proper interview, have a proper conversation – which of course is something I would absolutely love to do – their goal is basically to not allow the conversation. And I think, you know, if you can’t answer a question simply as, ‘How do you feel about the fact that there’s many states where people get fired just for being gay or trans?’ – I mean, if you can’t answer that question, and you’re running for president, of course that worries me, right?”

But it got to the point, Page says, when she didn’t feel as if she had a choice. “If someone said, ‘Hey, if you do it you won’t be in any movies again’ – which of course is a silly thing to say, but let’s just say that were the case – that would have been sad because I obviously love to act, it’s a huge part of my life. But honestly, I would have done it anyway. It just gets to that point where you’re just like, ‘No – this is my life, and I need to live it.’ You know?”

You can hear something different here, even here on the phone, from halfway across the continent, and it recalls something from Into the Forest. Just before the power goes out, Page’s character, a med student, is considering the definition of “fugue state” – a rare dissociative disorder characterized by amnesia. In the film, the sisters go through a sort of fugue state. And now here, on the phone, Page allows that perhaps she has emerged from her own fugue state.

Listening to her, there seems to be an expansiveness in her voice, a confidence and maturity in her age, an unfettered aspect – a “joy,” she says. It’s even affected how she approaches her work. For years, Page says, like many creative people she believed she had to work from “an attachment to pain and discomfort.” But she realized it closed her off as an actor.

Now, “because I’ve gone through transformation, I’m so much happier. So much of the, you know, dark cloud, sadness, ‘depression,’ if I may – is gone.”