Deborah Willis's first book, Vanishing and Other Stories, was a finalist for the Governor-General's Literary Awards in 2009. Her second collection of short fiction, The Dark and Other Love Stories, was recently published by Hamish Hamilton. Willis lives in Calgary, where she works for the independent publisher Freehand Books.

I wrote this book over a span of seven years, so these stories emerged slowly, at a time in my life when I felt that all my relationships were deepening. In my early 20s, I valued my own independence above all – and maybe it's necessary to do this as a young person, in order to forge an identity that is connected but separate from your parents and from your own childhood self. But I began to outgrow the idea that a human being can be independent, and came to see just how essential my family, partner and friends are to my existence. So I wrote a book about love in all its guises. One story is about an intense friendship between girls at summer camp, another is about a man who adopts a pet crow, and another is about a man whose girlfriend is starring on a reality show to try to win a seat on the first manned mission to Mars. The book is about attachments and how they bond us to each other and the world.

One of my writing teachers, Patrick Lane, once told us a story about a group of writers who had a competition with each other to see who could get the most rejection letters in one year. At the end of the year, they found that the writer with the most rejections was also the writer with the most acceptance letters. I heard this story when I was about 18 years old, and am still grateful for it, because it has allowed me to see rejection as a necessary part of the writing and publishing process, not as failure.

Sometimes, I wish I were Sancho Panza so that I could eat a lot, sleep outside under the warm Spanish sun, go on adventures and have a loyal donkey as a friend. But he also gets lashed and pinched a lot, so it wouldn't all be a picnic.

I was a kid who obsessively watched part one of Back to the Future about 40 times, so time travel is the obvious answer – though I now see the silent privilege inherent in that movie, the fact that a white male could travel into the past and be accepted with open arms. As an adult who's – mostly – gotten over her crush on Michael J. Fox, I'd still choose time travel. Because then I could fast-forward to a time when Donald Trump has been impeached and Mike Pence's term is over and Steve Bannon has been convicted of hate crimes, instead of having to live through this absurd nightmare day by day. Then again, that would mean missing the potential for growth and solidarity that resistance can afford. So maybe living without a superhuman power is preferable, though frightening.

That's easy! My favourite bookstore is Munro's Books in Victoria, because it's one of the most beautiful bookstores on earth and because I worked there for seven years. Working there meant helping customers and fulfilling orders, but also having strange, funny conversations with co-workers, eating enormous amounts of chocolate, listening to classical music played by a live band every Christmas and, of course, having immediate access to thousands of books. And it was at Munro's where I first saw my own book on a store shelf. It was a dream life. 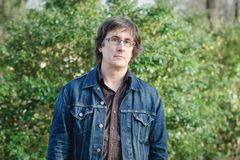