In 2012, after 15 years as a professional theatre artist, I returned to graduate school at York University in Toronto, where – unlike my undergrad experience – no one was reading No Logo and Adbusters and railing against capitalism. Instead, debates focused on identity and gender, safe spaces and trigger warnings. Halloween costumes provoked protests, Bill Cosby and Harvey Weinstein were revealed as predators and Jordan Peterson was making waves on YouTube.

Inspiration struck. I abandoned my dissertation, flew to Belize, found a hammock and pounded out a draft of a novel called Privilege, about a young university professor navigating a charged campus climate.

After months of rewrites and revisions, I googled “Canadian publishers,” drew up a list of houses that accepted unsolicited submissions and sent off my manuscript.

Rather than eating my fingernails awaiting responses, I volunteered at an elephant sanctuary in Cambodia. I was lodging in a tree house when the first rejection arrived: This is not for us.

The first of many rejections to come.

Eight months later, back in Calgary, I bought a condo. In the midst of moving house, my phone rang. Did I know anyone in Winnipeg?

“Hi,” the gravelly voice intoned. “Did you submit a book to Great Plains Publications?”

A year into the publishing process, I finally admitted my social-media allergy to Great Plains’ lone publicist. My Facebook profile had been dormant since 2012, I abhorred Twitter and didn’t even have a data plan. The publicist began coaxing me into the 21st century and as Privilege’s release date approached, I joined Instagram. (Have I mentioned my handle is @jasonpatrickrothery?)

On Oct. 24, six days before Privilege would launch at a Calgary-area Bavarian-style sausage and beer haus called Wurst, I received a text from my good friend Clayton McKee. Clayton had read an early draft of Privilege, consulted on an especially tricky section and championed the book ever since.

Like most of the planet, I’m a huge Game of Thrones fan, and awed by Martin’s success. Clayton had won an all-expenses paid trip to an event hosted by the beloved fantasy fiction icon.

A few bewildered exchanges later, Clayton wrote: “Get me a copy of your book so I can give it to him.”

Despite Clayton’s enthusiasm, I did not think he’d meet Martin in person. Rather, I imagined an auditorium full of adoring contest winners, their liege lord seated in an Iron Throne replica, doling out nuggets of wisdom before absconding to his secret lair to put the finishing touches on The Winds of Winter.

Nonetheless, at Clayton’s insistence, I nervously scribbled out an inscription to one of the most famous authors in the world, and popped Privilege in the post, certain that George “Hold the Door” Martin would never lay eyes, much less hands, on my book.

Busily preparing for the launch, I forgot about Clayton’s forthcoming adventure. On Oct. 30, Privilege debuted to a lively crowd of 50-odd family, friends and strangers. Halloween morning, I dragged myself out of bed, got the coffee gurgling, walked my dog around the block and checked my phone for messages. There was the photo: A grinning George R.R. Martin, holding up, and pointing at, Privilege.

I called Clayton immediately. My similarly groggy friend recounted spending an hour hanging out with Martin one-on-one, personally handing Martin my book, watching Martin flip through the first few pages and smile as he read the inscription.

I was shocked and instantly anxious. I suspected I was standing on a PR gold mine, but by what means, and with which tools, was I supposed to tap the vein?

Now what should I do?

Posted the pic front and centre on my website. Now what?

Sent it to the publicist at Great Plains. (“Wow!”) Now what?

Messaged a business consultant buddy: “Any idea how I can leverage this for, like, publicity?”

“More hashtags,” he told me.

Now what? has become my new mantra.

After Privilege launched, I thought the heavy lifting was over with. This is like thinking you’ve finished raising your child the day you give birth. Books can live long lives and travel far and wide. Publicity efforts are not only continuing but shared.

Great Plains has been wonderful to work with, but its publicist is only one person with limited resources. In consulting with various writers, I’ve realized the size of the publisher is irrelevant. With such a monumental amount of stuff out there, every writer is locked in a perpetual arms race for eyeballs.

No natural-born huckster – I doubt many artists are – I’m doing whatever I can to grab attention: spamming 400 e-mail contacts, promotional Instagram posts, pestering people for Goodreads reviews. I’ve called in every favour I can think of and sent copies of Privilege to every media outlet that might be interested.

Will Martin read Privilege? Has the photo boosted interest? Affected sales? As Ygritte tells Jon Snow, I know nothing.

What I do know is that the fate of my book is largely in my hands. I’m proud of Privilege and want people to read it, but no one can read a book they aren’t aware exists.

The photo of Martin holding Privilege is a talisman of sorts. It reminds me that success is at least partly luck, that stars align in magical ways and – most importantly – we must be prepared to capitalize on that luck, and those unlikely alignments. 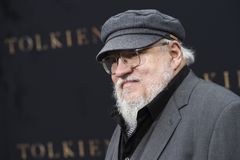 Author George R.R. Martin says Game of Thrones finale was an ending, but ‘also a beginning’
May 21, 2019 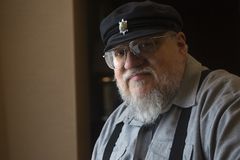 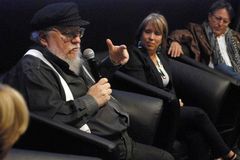