Long live the feminist revisionist backstory. Exploring the antecedents and motivations of literature's great villainesses has proved a rich cultural vein, restoring the reputations of everyone from Mr. Rochester's mad wife to the Wicked Witch of the West. The approach is such a winner that Disney got into the act, opening up its own cupboards to a bit of political spring cleaning: Based on both the 19th-century versions of the fairy tale and Disney's own 1959 animated movie, Maleficent is a retelling of the Sleeping Beauty myth that reveals the reasons the evil fairy godmother cursed that darling baby in the first place.

Created by a team of artists with all the credentials to produce a surfeit of CGI, the film surprises not for its baroque visions of a colourful woodland enlivened by joyous fairies and a forbidding castle peopled by unhappy humans, but rather for the thematic richness of its story gloriously personified by Angelina Jolie in the title role. Her skin is pearly white; her famous lips are a startling red; her cheekbones are honed to Precambrian ridges (by computers, I'm assuming) and, like her 1959 animated predecessor, she sports a fine pair of twisting horns, welded to her head with a lizard-skin turban.

She is a sight to behold, but you should have seen her when she had wings. A notably imaginative departure by Disney stalwart Linda Woolverton (The Lion King, Alice in Wonderland), the script begins when Maleficent is a young fairy (charmingly played by Isobelle Molloy) with the wings of an eagle. She soars around a little paradise full of frolicking fairies, nymphs and wood spirits whose only fear is of the hateful humans who live beyond their forest.

Meeting a human boy who strays into this perfect world, Maleficent falls in love. But the boy grows into an ambitious man who viciously betrays her so that he can tame the fairies and become king. And it is when this increasingly violent King Stefan (Sharlto Copley) has a daughter that the now-adult and wingless Maleficent utters her legendary curse.

The villains of fairy tales and comic books inhabit a Manichaean world of good and evil. Everyone from Lex Luthor to the original Maleficent (whose very name means doing evil) are wicked just because, teaching our children and the adults they become that bad guys are everywhere and killing them is not merely permissible but natural. What is cheering about Jolie's Maleficent is her journey; betrayed, she descends to the depths of vengeful anger, but she gradually recovers her ability to love. The star casting is successful because, in the simple context of a fairy tale, Jolie does make both the terrifying horned creature and her gradual awakening heartfelt, suggesting emotional richness beneath the eye-stopping physical performance – rather like the way the celebrity herself hints at human weakness behind the Hollywood facade.

Of course, there are problems, as Robert Stromberg, a visual effects artist taking the director's chair for the first time, bombards us with twittering fairies, exploding trees and marching armies. Unrelentingly dark, the violent humans are led by an increasingly haggard Copley playing a paranoid tyrant with an inexplicable Scottish accent. (The cast's voices wander about the British Isles; only Jolie's mid-Atlantic accent achieves the timeless hauteur suited to the piece.) For Stefan, unlike his jilted Maleficent, there will be no redemption – Copley actually creates a fairly realistic portrait of tyranny – and his troops assault the fairy kingdom loudly and repeatedly before ultimately capturing the creature whose audacity so torments them.

Adults will probably experience the movie as the usual 3-D assault on the nerves; young children will surely find parts of this terrifying.

On the lighter side, the fairies who take care of young Aurora (a suitably vivacious Elle Fanning) until her 16th birthday are also grating. It's hard to see why anyone as suspicious of his supernatural neighbours as King Stefan would entrust his newborn to fairies, let alone this bumbling trio, performed by three British character actresses led by Imelda Staunton. Insufficiently explained by the script, they are supposed to provide comic relief and a break from the darkness of both Maleficent and her human foes.

But in truth, you just can't wait until the wicked Jolie returns to the screen. Whether a malevolent twinkle illuminates her beady eye or a heartbreaking tear rolls down her alabaster cheek, she is the film's power. Only a few letters separate doing evil from doing great: Her Maleficent is magnificent.

Meet Rick Baker: The legendary artist behind Maleficent and other beloved beasts of film
May 29, 2014
Brad Pitt attacked by ‘serial prankster’ at Maleficent premiere
May 29, 2014 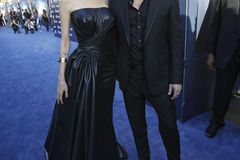 What’s coming to the big screen in 2014
January 1, 2014
Reactions to Angelina Jolie's double mastectomy: Inspiring, brave, rich
May 14, 2013
Follow Kate Taylor on Twitter @thatkatetaylor
Report an error Editorial code of conduct
Due to technical reasons, we have temporarily removed commenting from our articles. We hope to have this fixed soon. Thank you for your patience. If you are looking to give feedback on our new site, please send it along to feedback@globeandmail.com. If you want to write a letter to the editor, please forward to letters@globeandmail.com.
Comments