Despite ever-increasing price tags, closure of creative spaces and steady decline in affordable housing, the city still calls young artists to redefine themselves outside the parameters of adolescence and suburbia. Hungry, ambitious creatives race to places like Toronto in a bid for artistic perception, to be seen as something and someone new. But of late, more and more of the arrivals are asking themselves: Who gets to be an artist? Who does a city belong to? And the answer to both of those questions increasingly tends to be: people with money.

The new film Sugar Daddy, written by and starring Kelly McCormack, who has appeared in the popular TV series Letterkenny and Ginny and Georgia, comes to a similar conclusion. McCormack plays Darren, a 20-something musician who comes to Toronto to carve out a space for herself as an artist. But in the process of surviving and making rent, she struggles to do much more than exist. This creative drowning will be familiar to many millennials who make life and art happen in the narrow windows between retail and restaurant jobs – exhausted, disillusioned and defeated.

When Darren is fired from her catering gig, desperation leads her to join a website where older men pay for the time and company of young women. This introduces her to two men, played by Canadian acting legends Nicholas Campbell and Colm Feore, who help Darren re-examine her relationship to herself, her art and the world. The transactional nature of the sugar daddy/sugar baby exchange is self-evident but it also allows her to see the give-and-take in all of her dealings with men, from her begrudgingly friend-zoned roommate (played by Ishan Dave) to the lascivious record producer (Aaron Ashmore) whose validation she desperately seeks.

As Darren’s awareness of her worth shifts to encompass her sexuality, so does her understanding of her art and how she uses it to manipulate and react to her surroundings. The process is uncomfortable, awkward, and at times upsetting. Finally, an improbably large monetary gift from one of her sugar daddies allows her to completely give in to herself, to be transformed and even freed by the confines of her new job.

While the plot of Sugar Daddy is a little lacking, under the creative eye of Wendy Morgan (making her directorial debut), the story is elevated by the heavily stylized direction and cinematography. Fantasy and reality are blurred in memorable scenes where McCormack’s dancer-like movements hypnotize the viewer and Morgan’s background in music videos creates a sense of magic amongst the melancholy. One scene in particular where McCormack’s Darren finds herself in a car next to her sleeping sugar daddy is staggeringly beautiful. As smoke fills the car, Darren emerges from the window in a puff of haze, engulfed in an electric-blue dress, choosing to make the most of her increasingly uncomfortable circumstances.

It’s also impossible not to be transfixed by McCormack’s presence and performance as the rangy, impenetrable and searching Darren. As she comes into her own as an artist and a woman, it’s liberating to be along for the ride. The way she dances around the edges of her own power until the final, haunting scene where her transformation ends in a fantastical, orgiastic heap of ballgowns and black ooze, makes it difficult to turn away from the film, even in its moments of stiltedness.

Sugar Daddy will be gripping viewing for anyone who wonders what it takes to make it – and whether it’s all worth it in the end.

In the interest of consistency across all critics’ reviews, The Globe has eliminated its star-rating system in film and theatre to align with coverage of music, books, visual arts and dance. Instead, recommended work will be noted with a Critic’s Pick designation across all coverage.

Film Review
New thriller Held is a #MeToo film that relies on twists instead of tact
Subscriber content
April 8, 2021 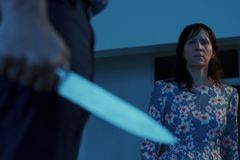 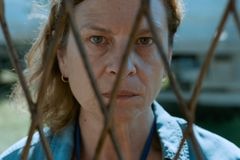