On Sunday, Apple learned what the rest of the world already knows: Do not cross Taylor Swift.

Although the about-face will cost Apple dearly, at least the company is now on the right side of the entertainment world's most powerful woman. With 59.2 million Twitter followers, just a shade under Barack Obama's, Swift commands a legion of devoted fans who will follow her every command. "I am elated and relieved. Thank you for your words of support today," she tweeted after Apple's mea culpa, adding the telling line, "They listened to us." Pity those who don't.

Just a few years ago, Swift was merely one of Nashville's brighter lights – a gee-golly success story who came to Nashville at the age of 14 to pursue songwriting and found herself at the top of the country charts. She didn't get there by accident. Thanks to a carefully calculated mix of wide-eyed "aw shucks" modesty and serious, almost next-level artistic chops, Swift quickly crafted an irresistible brand: the homecoming queen who you actually wanted to vote for. If her songs were terrible – if there was no vision or philosophy (yes, philosophy) behind them – then she wouldn't be the talking point she is today. But Swift is a uniquely talented artist who knows exactly what she's doing, and it wasn't long after her domination of the oft-siloed country genre that she accomplished the next-to-impossible: a crossover into the world of pop.

It was in that cultural arena that Swift cemented her cultural power. Witness her 2012 single We Are Never Ever Getting Back Together from the album Red, the first song in Swift's career to peak at No. 1 on the Billboard Hot 100. In a way, the savvy track is emblematic of everything that propelled Swift to her current dizzying heights: It's an expertly engineered ear worm designed for maximum pop exposure; was the first music video to be released in 4K resolution, ensuring coverage on everything from music sites to tech blogs; and hinted at what happens to those who end up on Swift's enemies list, with the track's not-so-subtle message of romantic revenge rumoured to be a direct hit on former boyfriend Jake Gyllenhaal.

With Red, Swift not only had the ears of the music industry, but the attention of a much more influential audience: the world's teenage girls. She was the ideal BFF: perky, smart, beautiful and with just enough of an edge that she would crush anyone foolish enough to mount a campaign against her. The rest of the entertainment world quickly picked up on her growing sphere of influence, and celebrities rushed to join her flock. Swift now counts such disparate talents as Lena Dunham, Selena Gomez, Emma Stone, Jennifer Lawrence, Lorde and supermodel Karlie Kloss as members of her influential inner circle. (And if anyone needs further proof of how loyal a celebrity following Swift commands, just take a look at the music video for her latest single, Bad Blood, a four-minute exercise in the art of the cameo that puts Robert Altman's The Player to shame.)

Through every magazine interview to every missive on Twitter and every perfectly framed and lit photo on her Instagram account (34.6 million followers and counting), Swift has conceived a persona and life too alluring to resist, a perpetual parade of close friends, fabulous wealth, undeniable artistry and a just-right sprinkling of feminism to prove she has more to offer the world than mere pop consumerism. If she speaks, who wouldn't want to listen?

It's not shocking Apple would capitulate to Swift so, well, swiftly. She just has the dominance to make the mightiest of companies second-guess themselves at the turn of a tweet. Taylor Swift could change the world, should she so desire. And we'd likely be better for it. 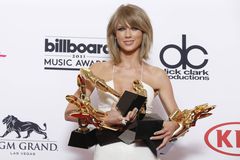