It could (and probably should) be argued that wacked-out pairings, such as Lou Reed and Metallica's 2011 collaboration, Lulu, results in healthy musical hybrids – if not for the final product, at least for the effort. Lulu was heavily appraised if nothing else, which indicates a certain level of fascination. Pop-culture writer Chuck Klosterman, in his review, wrote, "If the Red Hot Chili Peppers acoustically covered the 12 worst Primus songs for Starbucks, it would still be (slightly) better than this."

A kinder suspicion and deeper anticipation greeted the news last year that the Roots had allied with Elvis Costello on a project involving the R&B reimagination of the bespectacled singer-songwriter's past catalogue. Bringing different kinds of music into the same space has never been alien to Costello, who rewrites the book on interesting partnerships. He has connected in the past with the martini-pop maestro Burt Bacharach, the bayou music box Allen Toussaint and the Swedish mezzo-soprano Anne Sofie von Otter.

What is intriguing with Wise Up Ghost, the true-aiming artist's marvellous new album with the Roots, is its tentative beginnings, its momentum and morphing, and the growth of the multicultural and cross-generational union between Costello and the Roots leader Ahmir (Questlove) Thompson. The result is one of the most talked-about records of the year – not counting the blockbusters – and the hopeful banishment of the phrase "unlikely collaboration" from the lexicon evermore.

"From where I'm standing, it's completely natural," says Costello of the project. "There are no affectations to it." At the moment, Costello is standing in the New York home he shares with his wife, the Canadian vocal-jazz pianist Diana Krall. (They have twin sons, speaking of collaborations.) "I've gotten over the fact that every record you make has to be on an equal footing."

In 2009, Costello was to appear on NBC's Late Night with Jimmy Fallon, for which Thompson and the Roots are the house band. Costello rang Kareem Wiggins, a drummer who works with Krall, and asked him if he thought the Roots would back him for the appearance. Unbeknownst to Costello, Thompson was laying the groundwork for what would become Wise Up Ghost. Costello and the high-haired drummer are unabashed music nerds; Thompson would need to dig deep to impress his counterpart.

And so, for Costello's walk-on music, the Roots played an old British commercial jingle that originally featured young Costello and his singing father, Ross MacManus. For the performance itself, an obscure variation of Costello's High Fidelity was settled upon. The track is off 1980's Get Happy, an album influenced by soul and southern R&B.

Asked about his past outside-the-box collaborations, Costello brings up 2004's Il Sogno, a ballet score for orchestra commissioned by Italy's Aterballetto dance company. "Do I think I'm as good as Tchaikovsky?" asks Costello, referring to the Russian composer who wrote operas and received news from Chuck Berry. "Of course not. But why would you not have the experience? It's like looking at a roller coaster. You want to know what it feels like, even if you don't ever do it again. And of course you come out of it with something of value."

The original intent of album producer Steve Mandel was to recast Costello lyrics, particularly politically charged ones that would still ring true today. For example, the fierce Stick Out Your Tongue gathers lines from Pills and Soap, Hurry Down Doomsday and National Ransom. "I didn't feel I had to write about things that were deeply personal and private," says Costello, "because that would be asking the Roots and Steven and Ahmir to subscribe to whatever experience I was having at the moment."

At first, the process took the form of Thompson sending Costello beats upon which the reconfigured lyrics were laid. A comfort level developed after a two-day session in Vancouver. Eventually Costello began contributing altogether new lyrics, including highly personal ones for The Puppet has Cut His Strings.

For that track, Costello had been sent a melancholy piece of music. He wrote the words late one night and recorded the vocals on his computer at his kitchen counter. "Lyrically, it is the exact description, or as much as I could tolerate it, of my dad's last hours," says Costello, whose father (like Thompson's father) was a working musician. "Ahmir wouldn't let me change the lyrics, and he wouldn't let me sing it again."

Thompson had conceived of the original music as the opening of the album, but Costello stipulated that the finished song be used as the last of the three bonus tracks. The deal was that it be placed at the end, because Costello didn't want to hear it on each listen of the record. "It has to be the very last thing to give people, because I don't want to go to that place every time."

To Costello, the Accidents Will Happen singer, the song is a symbol of what can occur when trust is put into something unperceived, and within a journey into the artistic unknown. "We travelled all that way, from the first idea of playing some songs for an occasion, to writing about the loss of someone that you would feel the most. That's a pretty good piece of travelling, among a group of people who didn't know each other very well. 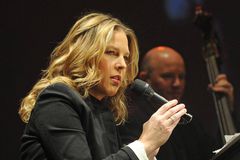 Elvis Costello spins his hits to a captivated audience
April 11, 2012 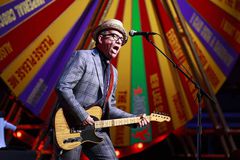 Questlove: 'I've never been that type of sensationalistic hip-hopper'
January 3, 2012 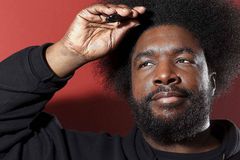 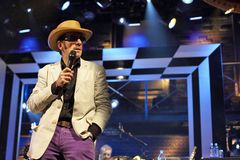