Earlier this month I was invited to a special screening and after-party in Los Angeles for a new series on Netflix. Very glam. This seemed odd but nice. The invitation came from one of those top PR companies in L.A. that I deal with occasionally.

Bonding (streaming on Netflix Canada from Wednesday) is the series, and on closer examination of the invitation and the series credits, the penny dropped. It is the work of Rightor Doyle. It’s a Doyle thing. All Doyles are, well, bonded.

The series, eight episodes, none running more than 20 minutes each, is a gobsmacker. Funny, smart, delicate and yet simultaneously crude – in case you find the details of fetish sex to be crude – and in the end, both moving and liberating.

Yes, it takes us into the day-to-day lives of best friends Tiff (Zoe Levin) and Pete (Brendan Scannell), and the scrapes they get into, both physical and emotional. Tiff is a grad student by day, and makes a good living on the side as a dominatrix. She’s making tons of money and needs an assistant. Pete is broke, and trying to develop a stand-up comedy act, but always pulling back from performing. Tiff hires him and, after first being both scared and repulsed, he joins Tiff’s secret world. Meanwhile, they’re both rather sad and lonely, having little in the way of romantic or family relationships.

Netflix has created a particular niche with this series and with Special, which I wrote about recently. These are LGBT-content series taken into the mainstream, and there is merit in that. For all its money and might, and for all that it is loathed as a behemoth by some, Netflix is actually doing a very simple but noble act in supporting the work of LGBT creators and giving them a platform that reaches a vast audience.

First and foremost, mind you, the content must be entertaining. And Bonding is that, by the bucketful. (It won the best episodic-series award at the LGBT film festival, Outfest.) It’s droll, deadpan and has an excellent cast. The two leads are wonderful and you’ll also find Micah Stock (Escape at Dannemora), D’Arcy Carden (The Good Place) and Kevin Kane, a regular on Inside Amy Schumer and in all of Schumer’s movies.

There’s a deftly done parallel storyline about Tiff’s graduate course, which covers Freud and sexuality. That story expands the series outward from the closed world in which Tiff and Pete serve clients who want to be whipped and humiliated, among other things. Throughout, there’s the distinct flavour of Pedro Almodovar’s work: lurid, melodramatic, saucy, all brilliantly bright colours and empathy.

The Doyle behind it is an actor on HBO’s wonderful Barry and a writer, too. He’s said Bonding is based on his own experiences in his youth in New York. (He signs off a press release with, “Yours in whips and chains, Rightor Doyle." What a scamp. Very Doyle.) He’s a funny dude and has written delightfully about being the gay best friend forever to various starlets. And with Bonding he’s created something with both heart and formidable sass. The Young and the Restless to honour Kristoff St. John, his work
April 22, 2019 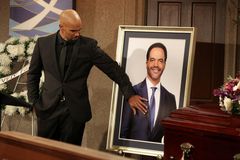 Trudeau to be portrayed on Canadian-themed episode of The Simpsons
April 22, 2019