Both at the High Park Amphitheatre in Toronto

Murder, rape, mutilation, cannibalism, an honour killing and the notorious stage direction “Enter a Messenger, with two heads and a hand”: What was Canadian Stage thinking putting on Titus Andronicus as part of its outdoors, family friendly Shakespeare summer showcase in High Park?

Whatever they were thinking, I thoroughly approve of the company bringing tragedies into the park rather than producing the same comedies over and over. While you may want to keep the youngest ones away, director Keira Loughran’s production of the ultraviolent Titus should be a hit with teenagers. Her symbolic and shambolic take on the play may not be one for the books, but at least it is not boring – the only type of the theatre that should be kept away from children at all costs.

Sean Dixon plays the title Roman warrior, who returns home triumphantly from war with the Goths only to watch Rome turn into “a wilderness of tigers.” In short order, Tamora, the captured Queen of the Goths (Shauna Black), has married the sadistic emperor Saturninus (a cackling James Graham) – and, with the help of her lover, the moor Aaron (Beau Dixon), the carnage begins. 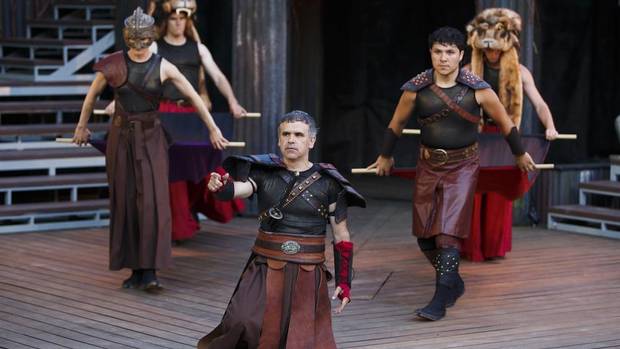 The Canadian Stage production of Titus Andronicus in High Park is heavily ritualistic but at other times completely unbridled.(David Hou/Canadian Stage)

Loughran and her costume designer Angela Thomas have put together a Titus that is somewhat contradictory in character – at times it is heavily ritualistic, at others completely unbridled. There’s a Japanese flavour to much of the proceedings with movement inspired by martial arts, but Titus’s “wilderness” remark is also taken quite literally at moments with the actors prancing about and snarling like untamed animals.

The killings are depicted symbolically rather than naturalistically: whenever characters are stabbed, swords are plunged into bodies and red rags pulled out. This is preferable to the usual under-the-armpit jabs followed by phoney writhing, even if it does makes Rome’s civil war look like a grisly game of capture the flag.

When it comes to Lavinia (Chala Hunter), who is raped by Tamora’s children and then has her tongue cut out and hands chopped off, Loughran pays homage to Peter Brook’s famous 1955 production by having red ribbons stream from her stumps and fall out of her mouth.

As for the acting amid all this mayhem, the company is, well, coherent. Only Beau Dixon’s intense Aaron arouses any serious interest; his unconditional love for his child and unconditional hate for everyone else stands out, each having an impressive purity.

Titus knows nothing of unconditional love. When one of his sons steps out of line early on, he strikes him dead without a second thought; maybe that comes from having had 25 sons. He seems more loving when first confronted with the sight of his defiled daughter, his only daughter. “This was thy daughter,” is how his brother Marcus presents her cruelly, to which Titus responds, “Why, Marcus, so she is.” (Dixon is, briefly, moving here.)

But it’s always hard to make this Titus match up with the one who, in the final scene, decides to dispatch his daughter: “Die, die, Lavinia, and thy shame with thee.”

This is the most shocking part of the play for me, because, unlike all the other acts of violence in the play, it is depicted as an honourable act. Loughran doesn’t remove the scene from the play, but she does find a way to make it less dicey by staging it as a kind of suicide pact.

During Titus and Lavinia’s final confrontation with Saturninus and Tamora, they serve up revenge as a rock concert. Titus plays the electric guitar tunelessly with the one hand he has left, while Lavinia backs him up, screeching tonguelessly into a mic. The number ends with Titus stabbing his daughter, then handing a shocked Saturninus his knife and running into it. This is a more impressive finale than smashing a guitar or burning a drum kit – and it seems a fitting ending to Shakespeare’s most punk-rock play.

Titus Andronicus is nasty and brutal, but it is also short here – clocking in at just 90 minutes. As You Like It, which is playing in repertory with Titus with the same cast, lasts about the same length of time. But although Nigel Shawn Williams’s production is more solidly acted and clearly presented, I was conscious of the passage of time after about 15 minutes. 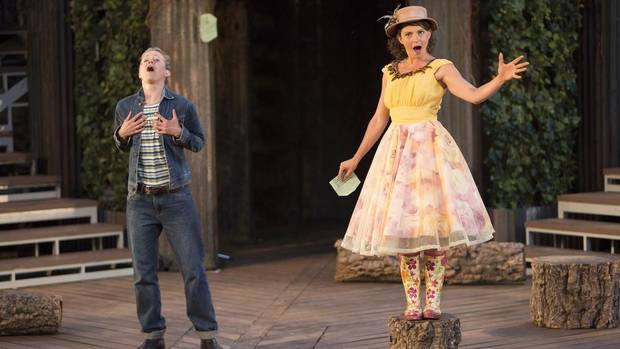 Also playing is the less gory and more family friendly As You Like It with Amy Rutherford and Chala Hunter.(David Hou/Canadian Stage)

Here is Shakespeare in the park as it is usually practiced: A well-worn comedy placed in a slightly shifted setting (apparently, France in the mid-1950s) with non-traditional casting (Jan Alexandra Smith is a Simone de Beauvoir-inspired Jaques) and pitched towards the kiddies.

Amy Rutherford is a strong Rosalind, except when called upon to be giggly and girly. Disguised in greaser gear as Ganymede, she has a pleasant, PG-rated chemistry with Orlando, played a charistmatic Alexander Plouffe. It’s all very innocuous and, yes, family friendly. I think I laughed more at Titus Andronicus, however.