Helen Lawrence is a groundbreaking piece of theatre, but also an old-fashioned one. You've never seen anything that looks like this before on a stage, except when you have.

Creator Stan Douglas's $1.4-million production is both elaborate and simple, a synthesis – and sometimes a struggle – between a modern visual aesthetic familiar from the immersive worlds of video games like L.A. Noire and the bare-stage, imagination-intense theatrics we associate with the Shakespearean stage.

Visual artist Douglas's hyper-real, 3-D computer-generated recreations of the fringes of postwar Vancouver – a virtual set that 12 flesh-and-blood actors get sucked into in front of our eyes – will certainly generate audience debate and discussions in the coming year.

But, thanks to an intricate and stylish script by Chris Haddock, Helen Lawrence is also just plain going to entertain as this show with a top-notch cast makes its way from Vancouver to Montreal's Festival TransAmériques and Toronto's Canadian stage, with stops in Munich and Edinburgh along the way.

Set in 1948, Helen Lawrence introduces us to series of crooked cops, hookers with hearts of gold, and lovers on the lam who we see simultaneously on an empty stage painted a celestial blue and on screen in Douglas's reconstruction of two real-life historic Lower Mainland locations.

The three main misfits are: Percy Walker (The X-Files' Nicholas Lea), a white bookie operating out of the semi-derelict Vancouver Hotel full of shell-shocked Second World War veterans; Buddy Black (Allan Louis), a black boxer who runs a beer garden and gambling den in Hogan's Alley; and Helen Lawrence (Lisa Ryder), a mysterious blonde woman who shows up from Los Angeles to throw their well-greased plans into disarray.

The mind behind Da Vinci's Inquest has drawn a dozen characters of different backgrounds with fascinating yearnings and satisfying arcs. There's no weak link in the well-curated cast – who, in addition to performing, must operate cameras on stage that import the images onto a semi-translucent screen.

What you see from the audience is bifocal: Three-dimensional actors in colourful costumes moving about in real space; and, at the same time the live-feed of them, turned two-dimensional and inserted into a visual black-and-white space displayed from familiarly disorienting film-noir camera angles.

It's worth pausing here to say: Wow. The way the images of the live actors interact so seamlessly and smoothly with their computer-generated environments is easy to take for granted.

But while virtual 3-D worlds have never been so intricately conjured on a stage before, shooting a film on stage and simultaneously screening it is not an original theatrical idea. Directors from Robert Lepage to Britain's Katie Mitchell have experimented with this technique for years – and, coming from the medium of live theatre, they've been sure to consider the stage visuals as much as the projected images.

Douglas, the conceiver of this project and its director, is a visual artist who is clearly thinking of the semi-animated film first and foremost. There it is literally in the foreground all evening, while the physical bodies float about behind, almost subliminally, in the background.

For me, the piece is at its best when the two are in creative friction. This is best illustrated in the character of Julie a.k.a. Joe, a woman who dresses like a man played by the formidable Haley McGee with heightened comic energy. In a couple of moments, the screen becomes fully translucent, the images disappear and Douglas allows us to see McGee exercising her craft alone onstage under theatrical lighting, knocking on an invisible door, before the 3-D animation swallows her again.

The scenes that work best allow us to see both mediums at work, rather than one in service of the other – as in a moment where the three leads get ready for their showdown in Hogan's Alley. We see them apart in the virtual world and together in the real world at the same time – and the story's theme of fate and luck is given a visual metaphor that straddles media.

For Helen Lawrence to rise above the level of the truly impressive novelty, the staging needs more of these moments where the theatrical and filmic elements are in dialogue. At that point, you'll have a piece of live art sure to completely knock the socks off the performance world. 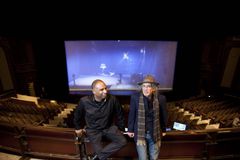 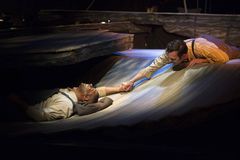 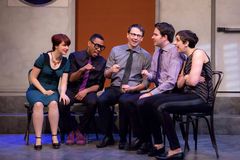 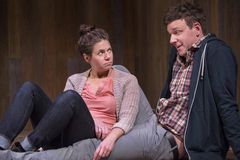 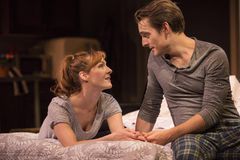 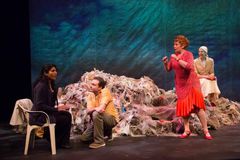