Hamlet had this right, at least: Get thee to a nunnery.

The Sound of Music opened on the Stratford Festival's iconic thrust stage on Tuesday, the night after a certain melancholy Dane had finished his masculine moping around on it – and right from the opening prelude sung a cappella by a superfluity of nuns, director Donna Feore's production was a joyous celebration of strong women.

Chief among them is the tremendous lead, Stephanie Rothenberg – who is sunny, cunning and never the least bit cloying as her Maria charms and outsmarts seven children, a Captain von Trapp and eventually even the Nazis who have annexed Austria.

Perhaps it'd be a bit much to claim The Sound of Music as a better play than Hamlet – but the 1959 Rodgers and Hammerstein musical does pass the Bechdel test, where Shakespeare's tragedy does not. And the show's enduring popularity 50 years after the film came out no doubt has something to do with a preponderance of fantastic female characters who leave Gertrude looking underwritten and Ophelia like a sexist sacrifice.

There's Maria, of course – an imperfectly pious nun sent to be governess for Captain von Trapp's children, and who without a moment of hesitation stands up to him and his tiger parenting ways. (The social-history connection made in the 1959 musical between how children are raised and how fascism takes root is really quite ahead-of-its-time.)

But there's also the Mother Abbess – warm and wise in Anita Krause's majestic performance – and her fellow nuns who are the unsung heroines of the play. Likewise, Liesl (Alexandra Herzog), the oldest of the von Trapp children, has a role to play in saving the day – and in Herzog's singing of Sixteen Going on Seventeen, slightly ironic, and her sexually confident dancing, she demonstrates that she is not "totally unprepared… to face a world of men."

And then there's the Baroness – who is engaged to Captain von Trapp, but who views marriage more as a corporate merger than the harnessing of two hearts. (This production doesn't judge her for that – though she's rightly taken to task for viewing the Anschluss in much the same way.)

It is striking in Feore's subtly feminist re-envisioning of the show how truly dramatically unique the relationship between the Baronness and Maria is. Here are two women romantically interested in the same man, but who never fight over him – and who seem to truly respect one another. Remarkably, neither falls into the evil stepmother stereotype either – especially with Robin Evan Willis's sincere and centred performance as Elsa.

I would be remiss if I only highlighted the women and didn't spare a line or two for Ben Carlson, funny and tremendously moving as Captain von Trapp with a sweet singing voice that brings tears to your eyes. This may be his best performance at Stratford since his Hamlet on the same stage in 2008 – and it's certainly his most open-hearted.

And, of course, there's the von Trapp children, adorable simply in their presence, but impressive in their singing and dancing. I'll list them all here for their parents' to share on Facebook: Sean Dolan, Effie Honeywell, Alec Dahmer, Graci Leahy, Sarah DaSilva and the tiny, terrific Zoë Brown.

Feore, who now has had three must-see musicals on the Festival Stage in a row, is known for being a bit of a Captain von Trapp as a director – exhibit A, the almost fascistic precision of the choruses in her production of Crazy for You last season.

So, I was skeptical how Feore's emphasis on souped-up spectacle would match up with a kinder, gentler show like The Sound of Music.

But the choreographer-turned-director's best-staged scenes this time around are often the book scenes or remarkably restrained dances – notably the elegant pas de deux where Rothenberg's Maria and Carlson's Captain von Trapp fall convincingly in love. Feore put her exacting nature into finding the right Maria, a search that took her out of Canada to the United States where she found the gem that is Rothenberg. Three cheers to a director who puts her standards of excellence above company politics and nationalism – and whose chief allegiance is to the audience.

It's true that you can feel Feore's frustration that The Sound of Music doesn't have more dance numbers during her scene changes, which she fills, unnecessarily, with frenetic movement. Indeed, at times, it seems like the cowboys from her Crazy for You last year have been hired this year as stagehands.

But, not for the first time, I remarked how confidently and completely she uses the entire stage, not overly concerned with naturalism. I wonder if we'll get to see Feore have a go at a Shakespeare play in this space she's now mastered three times in a row? 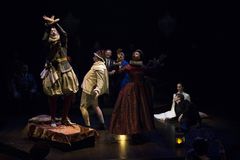 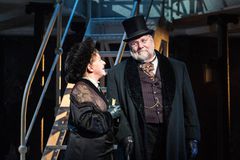 Theatre Review
Peter and the Starcatcher has sailed its way into the Shaw Festival like a gust of fresh sea air
May 21, 2015 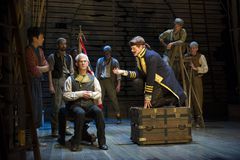