Alberta’s private model for retail stood out as one of the few success stories in the first year of legal adult-use cannabis in Canada, which left many players struggling to compete with the illicit market.

Legal cannabis producers and retailers in Canada have grappled with supply shortages, high prices and illegal rivals determined to maintain their share of a marijuana market expected to be valued at more than $5-billion a year by 2024. But with more than 300 bricks-and-mortar retail licences issued, Alberta’s cannabis scene is beginning to resemble a traditional retail sector, with stores offering discounts, loyalty programs and a focus on customer experience to overcome burdensome restrictions on advertising and promotions.

Some of the biggest chains so far in Canada – National Access Cannabis Corp. (NAC), Fire and Flower Holdings Corp. and Alcanna Inc. – have planted firm roots in Alberta. The province’s focus on private retail has also enabled store brands such as NewLeaf Cannabis and Nova Cannabis to open in relatively large numbers.

"We finally are in a position to act a little more like traditional retailers. We might not be able to replenish that specific product that’s flying off the shelves,” said Mark Goliger, chief executive of NAC, Canada’s biggest pot-retail chain by store numbers.

Retailers struggled to buy enough pot to stock their shelves during the first several months after legalization, with products that were available one week but not the next as licensed producers, or LPs, struggled to ramp up production. Most experts say the black market still pulls in more than 70 per cent of all pot-related sales, as a lack of physical stores in other provinces prevents many from accessing the legal market.

“It’s getting closer to being able to always ensure the top-selling strains are in stock so our customers have certainty to come into our stores and buy whatever they would like,” said Darren Bondar, chief executive and president of Inner Spirit Holdings Ltd., which owns the Spiritleaf retail franchise chain. “There’s still a ways to go and we need more product volume and variety from licensed producers to be able to differentiate ourselves from the proliferation of stores across the province.”

While most publicly traded pot retailers in Alberta have yet to make a profit as they invest in rapid store expansions, increased outlet numbers and supplies means their revenues have started to increase quarter over quarter.

Several retailers lowered prices in recent months to compete for customers, while some are having sales to move inventory and create loyal shoppers. Getting word out to potential customers who have never visited their stores, however, is a challenge as pot shops are not permitted to advertise products.

The quantities and varieties of cannabis products have increased over the past year as LPs ramp up their production, but there are still some snags preventing retailers from using traditional business techniques to attract new customers. In Alberta, pot retailers must buy from the sole wholesaler – the government agency Alberta Gaming, Liquor and Cannabis – and average store prices are roughly double those on the black market.

On top of this, strict federal marketing regulations prevent LPs from building brand recognition through the traditional means of advertising and unique packaging to distinguish their products. This makes it difficult to establish brand loyalty and, consequently, repeat purchases.

“We’re competing for foot traffic, customer visits and their dollars, but the other half of the battle would be for a retailer to use its merchandiser function by finding better deals, use market forces to your advantage. Retail complexities are not available to us because of the middleman,” said Trevor Fencott, CEO of Fire and Flower.

The federal government’s objective with cannabis legalization has focused more on health and safety, rather than business efficiencies.

The average item price of cannabis in Alberta dipped 4 per cent in September after rising slightly from March through July, according to data from Headset Inc., a cannabis data intelligence company.

“Cannabis customers, as of now, are very price sensitive. If there’s something cheaper, they’ll switch. As there get to be more stores, there’s so few tools you have to attract customers,” said James Burns, CEO of Alcanna Inc., which owns Nova Cannabis stores.

“We’re all selling the same products. It’s so hard to tell anyone about any sales. We use sales to move slow inventory. It’s not an effective tool for driving traffic because how can you tell anybody.”

In Saskatchewan, both wholesale and retail are privatized, giving retailers a more competitive edge.

“We absolutely, without question, buy at a significant discount to any province in Canada in Saskatchewan,” Fire and Flower’s Mr. Fencott said.

But Saskatchewan is a small province, with Echelon Wealth Partners estimating in a report that it has 100,000 adult cannabis consumers, compared with 700,000 in Alberta and two million in Ontario. It said stores in Alberta need to sustain a “very high” growth rate to maintain sales and, if the province becomes oversaturated with pot shops within the next two years, same-store sales could decline and force weaker operators out of the market.

Alberta store numbers can likely increase to about 550 before becoming saturated, said Phil McDonald, director of regional strategy for Headset.

Already, stores in cities such as Calgary and Edmonton saw revenue flatten and even decline in August and September after pot shop numbers jumped and increased competition, another sign of a maturing market.

“In cities that are having a lot of licences issued, revenue growth over stores has been pretty consistent, but for the first time we’re starting to see a trend downward,” said Albert Kim, CEO of Greenline POS, a cannabis retail solutions company in 75 stores across the country. 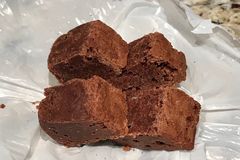 The verdict is in, and Year One of legalized cannabis in Canada was a dud Subscriber content
October 18, 2019 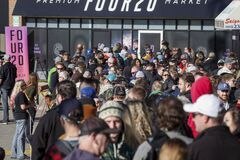 Follow Marcy Nicholson on Twitter @ Marcy_Nicholson
Report an error Editorial code of conduct
Due to technical reasons, we have temporarily removed commenting from our articles. We hope to have this fixed soon. Thank you for your patience. If you are looking to give feedback on our new site, please send it along to feedback@globeandmail.com. If you want to write a letter to the editor, please forward to letters@globeandmail.com.
Comments