The Bank of Canada is raising interest rates again amid easing trade tensions with the United States and it has opened the door to more frequent hikes in the months ahead.

The central bank raised its benchmark rate by a quarter of a percentage point to 1.75 per cent on Wednesday – its fifth rise since mid-2017 – and included a stark warning that borrowing costs are headed higher at a time when Canadians are saddled with record debt levels.

The bank abruptly dropped its recent pledge to take a “gradual” or “cautious” approach to rate increases. The go-slow message has been a fixture of the bank’s statements for the past year. Its removal now suggests the bank could break with its recent pattern of hiking once every quarter and will now consider moving faster.

The Bank of Canada highlighted that its key rate will eventually have to get back to the so-called “neutral” level to keep inflation at its 2-per-cent target. The bank estimates that neutral level – the point where monetary policy neither speeds up nor slows down economic activity – is in the range of 2.5 per cent to 3.5 per cent.

Governor Stephen Poloz said the shift in tone is meant to signal to investors and borrowers that the bank could move again at any meeting, which are held eight times a year. The next meeting will be Dec. 5.

“Markets seem to have seized on gradual meaning we would only move at every second meeting,” Mr. Poloz told reporters in Ottawa. “We really don’t want to reinforce that as a locked-down, mechanical expectation. This is serving notice that it could be faster or it could be slower.”

Most investors are not buying the notion that the central bank intends to slow the process of getting rates back to normal, given the mostly positive spate of recent news for the Canadian economy, including the signing of a new trade deal with the United States and Mexico on Sept. 30.

The Canadian dollar shot up half a cent after the bank’s announcement to near 77 US cents as investors seized on the bank’s generally upbeat outlook.

But the central bank’s plans could run into trouble if indebted borrowers can’t handle higher rates, stalling economic activity, Laurentian Bank Securities economist Sébastien Lavoie cautioned. If that happens, the bank “could find it more challenging than it let on.”

The bank acknowledged that it will closely monitor how Canadians are coping with higher interest rates as well as the economy’s response to global trade developments, including the fate of U.S. tariffs on Canadian steel and aluminum and the continuing U.S.-China trade showdown.

The central bank said housing risks are “edging lower in a number of respects” owing to the combination of higher interest rates and stricter mortgage lending rules introduced in 2016 and 17. The bank pointed out that households are borrowing less and the “quality” of new mortgages has continued to improve.

Improving conditions don’t mean there won’t be problems. The central bank warned the housing sector will continue to pose a risk to financial stability “for some time” given the millions of heavily indebted households across the country.​

Meanwhile, the Bank of Canada said the proposed United States-Mexico-Canada Agreement is “encouraging” for the Canadian economy. The tentative deal, which must still be ratified by the three countries, “will reduce trade uncertainty in North America, which has been an important curb on business confidence and investment,” the bank said.

The bank had previously estimated that uncertainty over the outcome of the trade talks would cut GDP growth in Canada 0.7 per cent a year by 2020. The drag is now estimated at just 0.1 per cent.

The bank upgraded its expectation for both exports and business investment owing to the new trade deal and the recent go-ahead of a $40-billion liquefied natural gas terminal and pipeline project in B.C. But the bank’s overall forecast for GDP remains largely unchanged, according the latest Monetary Policy Report, released on Wednesday.

The threat of trade upheaval could hang over the Canadian and global economies for some time because of the U.S.-China trade tensions, the bank warned. The two countries are embroiled in an escalating trade war, imposing tariffs on half a trillion dollars of each others’ imports, with more threatened. On balance, the U.S.-China showdown will be mildly “negative” for the Canadian economy. Yes, Canada will gain new customers in China because of tariffs there on U.S. goods. But that will be offset by weaker U.S. demand and lower commodity prices, the bank said.

U.S. manufacturers are raising prices due to tariffs, according to latest Fed report
Subscriber content
October 24, 2018 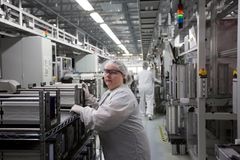