Bayer AG said on Thursday it had agreed to sell more crop science businesses to BASF in a deal that fulfills undertakings to the European Union and other regulators as part of its takeover of Monsanto Co.

The package, being sold for up to 1.7 billion euros ($2.1 billion), includes its global vegetable seeds business, certain seed treatments and digital farming activities with total sales of 745 million euros in 2017.

“With this move, we are implementing the corresponding undertakings made to the European Commission and other regulatory authorities to allow the successful closing of the Monsanto transaction,” Werner Baumann, Chairman of the Board of Management of Bayer AG, said in a statement.

The German drug and crop chemical maker’s bid to buy seed and chemical company Monsanto Co is on track to win U.S. antitrust approval by the end of May, unless there is a last-minute complication, two people familiar with the matter said earlier on Thursday.

The transaction, if it closes as seems likely, will create a company commanding more than a quarter of the combined world market for seeds and pesticides in the fast-consolidating farm supplies industry.

The U.S. Justice Department said in March it was pressing on with its antitrust review of the deal.

Bayer previously said it would only launch a cash call once it had sufficient clarity that the deal, signed in September 2016, would get the go-ahead.

It had already pledged to sell certain seed and herbicide assets for 5.9 billion euros ($7.2 billion) to BASF, as well as its vegetable seeds business. 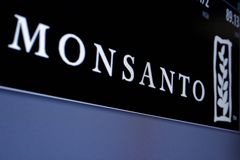