Jim Pattison had a mission: Saskatchewan or bust.

Determined to make the lengthy drive to the Prairie province from Vancouver, the B.C. billionaire embarked on his journey in mid-September, bound for his hometown of Luseland.

The whirlwind trip served as a grassroots reminder that Jim Pattison Group can’t afford to stand still, he said in a wide-ranging, 90-minute interview with The Globe and Mail, days after returning from his adventure.

“If you like your work, it’s not a chore. I like what I do. There’s always something to do – put it that way.”

Mr. Pattison started with one car dealership in 1961 and now oversees a worldwide privately held conglomerate, doing business in more than 85 countries, surpassing $10-billion in revenue last year. Annual revenue is more than five times higher than two decades ago and the number of employees has exceeded 45,000 people, compared with 9,300 workers two decades ago.

Mr. Pattison doesn’t take his wide array of holdings for granted. He has the mileage to prove it. “I visited 26 different locations in Saskatchewan. Good trip,” the entrepreneur and philanthropist said as he looked at a large map of Saskatchewan on his office wall.

Mr. Pattison drove on his own for most of the nearly two-week journey in September, though former Canadian Pacific Railway Ltd. chairman William Stinson joined him in Regina for a portion of the trip. While in Saskatchewan, Mr. Pattison needed to make an interprovincial detour because of a commitment to attend an event in British Columbia. Ever resourceful, he requested his private jet to take them to Oliver, B.C., and back the same night.

He also crossed over to Manitoba to visit two John Deere outlets in that province, and he missed only one of the 17 dealerships in Saskatchewan, because “they weren’t there on the weekend.”

Mr. Pattison returned from his journey on Sept. 22, in time to attend a customer appreciation day at the Choices store in Vancouver’s Kitsilano neighbourhood, one of 11 locations for the specialty grocery chain in the province.

At Jim Pattison Group’s headquarters last week, he recalled his family’s humble roots. His mom was raised in a sod house in Major, Sask, while his dad served as the postmaster in Luseland. His parents moved to Vancouver’s east side when he was five years old. In the early 1940s at age 13, he travelled back to Saskatchewan for a summer job, playing a trumpet at church camps.

Brimming with energy, he veered in and out of his office, and led a colourful tour of photos and mementos on the walls and scattered throughout the 18th floor of Shaw Tower, located near downtown Vancouver’s waterfront – walking distance to his yacht.

The hallways near his office are adorned with dozens of photos and mementos from prominent figures around the world over the decades. He mentions some of the photos, in which he is shown posing with such luminaries as Oprah Winfrey, Pierre Trudeau, Justin Trudeau, Billy Graham, Bob Hope, Tony Bennett, David Foster, Warren Buffett, Queen Elizabeth and Margaret Thatcher.

In the photo, Mr. O’Neal is carrying the five-foot-six Mr. Pattison in his arms on a stage in front of an audience during a Vancouver convention. “I talked about how I would like to be tall like Shaq. He’s seven-foot-one. He reached over and picked me up,” Mr. Pattison said with a chuckle.​

He then took an impromptu walk across the street to a luxury condo unit, which Jim Pattison Group reserves for visiting VIPs. He pulled out his trumpet, blaring a few notes on the balcony at the Fairmont Pacific Rim condo/hotel building.

Inside sitting at the grand piano, and against the majestic backdrop of mountains and Burrard Inlet, he played I Left My Heart in San Francisco. “No charge,” he quipped. After some improvisation, he also played a fragment from Battle Hymn of the Republic.

After leaving the condo, Mr. Pattison headed back to Shaw Tower and the basement garage, where he showed off the Ram 1500 Laramie truck that he drove on his recent trip. He reminisced about the first used car that he sold: “It was a 1939 Dodge. My boss gave me the car and told me to sell it.”

The billionaire has a knack not only for selling, but also for buying. Through Ripley’s Believe It or Not, Mr. Pattison bought the iconic dress that Marilyn Monroe wore when she sang “Happy Birthday, Mr. President” to John F. Kennedy in 1962, paying US$4.8-million at auction in 2016.

“It was my idea. I heard that the dress was going to be for sale, and we bought it for Ripley’s,” Mr. Pattison said. The dress’s first Canadian stop: his hometown of Luseland, followed by a Save-On-Foods in Saskatoon. His son, Jim Pattison Jr., is the Florida-based president of Ripley’s Entertainment, the only one of Mr. Pattison’s three children working at Jim Pattison Group.

Mr. Pattison emphasizes that he values family. He and his wife, Mary, have been married for 67 years.

Those working closely with him have stuck with him almost as long. Maureen Chant has been his administrative assistant since 1963. At Shaw Tower, he points to a portrait of a two-car showroom that he opened in May, 1961, in Vancouver: “That’s where we started. Maureen worked in the parts department, and I worked behind the tire department.”

He also values giving back to the community. Mr. Pattison made headlines in early 2017 when he donated $75-million to the St. Paul’s Hospital Foundation.

In his office, he takes a framed sheet of paper off the wall, and holds it in his hands. It’s a cherished gift from his late mother, Julia, who copied an inspirational poem written in her own elegant handwriting, putting American poet James Russell Lowe’s name at the bottom.

In part, it reads: “Life is a sheet of paper white, whereon each one of us may write.”

Julia Pattison visited her son’s Pontiac/Buick dealership on the opening day in 1961 in Vancouver. “My mother came to my office. She said, ‘Jimmy, we don’t have a lot of money as you know and I can’t give you a nice present.’ But she gave me this. This is important.” 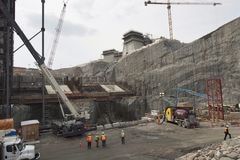 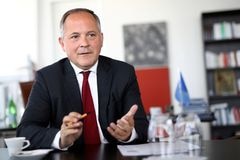