B.C. softwood lumber shipments to China are in decline as that country’s slowing economic growth pinches demand for one of Canada’s key exports.

The volume and value of B.C. softwood exports to China have been on a downward trend since peaking in 2013.

While full-year trade statistics for 2018 won’t be released until mid-March, industry experts interviewed by The Globe and Mail estimate that almost five million cubic metres of lumber went from British Columbia to China last year, compared with 5.5 million in 2017 and a record 7.9 million in 2013.

Asia in general, and China in particular, are considered high-growth markets for B.C. lumber producers, but lofty export expectations have now been scaled back.

Still, Canadian forestry executives prize China as the second-largest foreign buyer of B.C. softwood after the United States and they are optimistic that China will be a reliable customer over the long term.

“We’re really encouraged by China, and we believe that there’s still a huge future in China for our products,” Don Kayne, chief executive officer at Vancouver-based lumber producer Canfor Corp., said in an interview.

In early December, B.C. government delegates postponed their plans to visit China days after authorities arrested Huawei Technologies Co. Ltd. chief financial officer Meng Wanzhou as she was transiting through Vancouver International Airport. But Mr. Kayne and other forestry executives forged ahead that month with the final leg in China of the Asia trade mission.

“We’re focused on the business of China as opposed to the politics. China has been supportive of B.C. companies, not just Canfor, and we’re grateful for that,” Mr. Kayne said. “Diversification of our markets is important because of the trade issues that we have on a regular basis with the United States.”

The long-running softwood dispute between Canada and the United States is expected to continue into 2020. The U.S. Department of Commerce collected final countervailing and anti-dumping tariffs averaging 20.23 per cent against most Canadian lumber producers in 2018.

Despite those tariffs, the United States has solidified its No. 1 position in rankings of B.C.'s top lumber customers. American buyers such as home builders accounted for an estimated 61 per cent of the total value of B.C. softwood shipments to foreign customers last year, far ahead of China at 15 per cent.

Industry analysts say a detailed examination of Canada-China trade statistics reveals that the situation is far from dire. Since 2013, there has been a gradual shift to B.C. producers exporting less lumber by volume to China, but the shipments contain better-quality and higher-value wood.

The value of B.C. lumber exports to all foreign destinations last year is expected to be roughly $6.5-billion, down slightly from 2017.

Russ Taylor, managing director in Canada at lumber research firm Forest Economic Advisors, said the trend of B.C. lumber shipments declining to China over the past five years is due in part to Russia increasing its market share in China. But China barely registered on B.C.'s radar 13 years ago; Chinese orders took up only 1 per cent of the total volume of B.C. lumber exports in 2006.

RBC Dominion Securities Inc. analyst Paul Quinn said 2013 and 2014 were anomalies for B.C. producers because of a spike in lower-grade softwood shipped to China, which used that wood for applications such as concrete forming. But supplies of lower-grade softwood have dwindled over the years, long after the infestation of mountain pine beetles in the B.C. Interior began in the late 1990s and peaked in 2005.

Mr. Quinn expects the value of B.C. softwood exports to China will flatten over the next couple of years, “but a lot can change depending on what happens with the U.S. tariffs and Canada."

Adding to the complexities, lumber prices have been volatile over the past year. Benchmark two-by-fours made from western spruce, pine and fir rose to US$422 for 1,000 board feet in early February, up 29 per cent since late December but still down 32 per cent when compared with US$622 in June, according to Madison’s Lumber Reporter.

B.C. billionaire Jim Pattison, who owns half of Canfor and more than 10 per cent of Vancouver-based West Fraser Timber Co. Ltd., said he doesn’t lose sleep over wild swings in commodity prices or political uncertainty on the trade front. “You can control costs and production, but there’s no sense in worrying about something you can’t control. You have to figure out how to deal with it. We can’t control what the Canadian or American or Chinese governments do,” Mr. Pattison said. 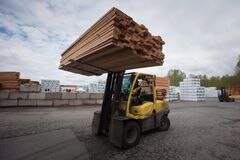 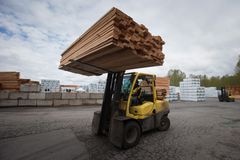 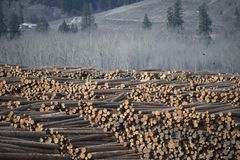