Bombardier Inc. has secured new credit worth US$1-billion and said it burned through less cash than expected in its latest quarter, bolstering its finances as it tries to finalize the sale of its rail business to France’s Alstom SA in the months ahead.

HPS Investment Partners LLC, a New York-based credit investment firm with more than US$60-billion in assets under management, has agreed to provide Bombardier with a three-year secured term loan of as much as US$1-billion, the Montreal-based plane and train maker said in a statement Wednesday.

The new funds provide a cushion for the company, which went through US$2.6-billion in cash in the first half of the year as the pandemic led to a slowing of new orders, the suspension of work at factories and the cessation of deliveries due to border closures. The company’s credit spreads have widened in recent months amid investors’ concerns that it won’t be able to divest the train unit and an aircraft parts business as planned while its liquidity position deteriorates.

The manufacturer’s cash management efforts appear to be bearing fruit, however. Bombardier said its cash usage in the second quarter was US$500-million lower than the previous forecast it gave to investors. It declined to offer an explanation or more details until the next quarterly earnings report, on Aug. 6.

“Although our cash usage has improved over the second quarter, the situation with the COVID pandemic is still very fluid,” spokesman Olivier Marcil said. “Therefore, this facility provides Bombardier with additional financial flexibility to manage throughout the coming months, as we work to close our announced divestitures. Today we feel very comfortable with our liquidity position.”

Bombardier’s widely held subordinate voting shares climbed 10 per cent in afternoon trading on the Toronto Stock Exchange Wednesday to $0.50. The company’s founding family controls the manufacturer with a special class of super-voting shares.

Once a high-flying company with a share price topping $20, Bombardier is now a penny stock. Chief executive Éric Martel, a former Hydro-Québec CEO, is trying to steer the company through a dramatic transformation that will see it become a pure-play manufacturer of luxury business jets.

Mr. Martel told reporters in June that he was in contact with the Canadian and Quebec governments about the company’s financial situation but had not made a request for help. He said the company had other options that were preferable to government support.

The new HPS loan is expected to be in place in the third quarter, Bombardier said. Under the terms, the company will have to repay half the outstanding principal when the Alstom deal goes through and must use a minimum of US$750-million over the three years. It will pay an interest rate at an agreed margin over the LIBOR reference rate and must offer as security unspecified elements of its aviation inventory and related accounts receivable, Bombardier said.

The company said it had cash and cash equivalents of US$1.7-billion as of June 30, in addition to US$700-million in unused credit. It estimated its total liquidity position with the new credit to be about US$3.4-billion at the end of June, reflecting a cash burn of about US$1-billion from April to the end of June.

HPS has been an active lender this year, committing almost US$5-billion to private debt opportunities since mid-March amid the volatility of the pandemic, according to a Bloomberg report published in May. The firm recently provided a US$500-million loan to direct-to-consumer oral care company SmileDirectClub Inc. and also joined pension fund Caisse de dépôt et placement du Québec and other lenders in a £1.575-billion (US$1.97-billion) debt bundling deal for U.K. insurance broker the Ardonagh Group.

Selling the train unit, Bombardier Transportation, is key to fixing the company’s capital structure, which is burdened with US$9-billion of debt, and could give the company a new lease on life. The deal is currently running through the regulatory review process in Europe.

Alstom CEO Henri Poupart-Lafarge told a parliamentary hearing in France Wednesday that he expects to secure European Union approval for the US$8.2-billion transaction by the end of the month. Alstom’s aim in taking over the Bombardier business is to better compete with Chinese giant CRRC Corp. 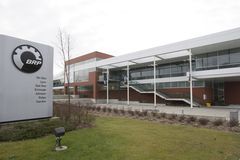 Bombardier in contact with government should it need aid, but faces anger over executive compensation
Subscriber content
June 18, 2020 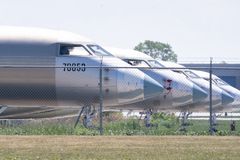