Canada’s postal service built a massive loss into its books Tuesday in anticipation of the potential cost of settling a pay-equity dispute with its biggest union.

Canada Post said it recorded a second-quarter loss before taxes of $242-million, a dramatic drop from the $27-million profit it made during the same period in 2017.

But it left the door open to a large revision of those numbers, depending on the outcome of talks under way with the Canadian Union of Postal Workers aimed at reaching a pay-equity settlement.

“A mediation process is under way to reach a negotiated settlement,” the Crown agency said in a statement posted on its website.

“Once the process is completed, the Corporation will be in a position to disclose the financial impact of the settlement, which may differ significantly from the estimates recognized in this quarter.”

Canada Post and CUPW jointly agreed to mediated talks in early June with the aim of reaching an agreement by the end of August on how suburban and rural carriers are paid.

Those talks are continuing, but arbitrator Maureen Flynn has warned that she will impose a final outcome if the two sides can’t come to a deal by Friday.

The complicated dispute is rooted in perceived pay inequities between mostly male urban carriers and their majority-female rural and suburban counterparts.

The union contends that the roughly 8,000 rural workers employed by the postal service earn at least 25 per cent less than the 42,000 carriers who deliver to urban addresses.

The agency’s second-quarter loss covers a “one-time payment” it will have to make to bring it in step with the law, CUPW national president Mike Palecek said.

“For decades, Canada Post has treated rural and suburban mail carriers as second-class workers,” he said.

“Finally, justice is on the horizon for these workers. Canada Post can’t run and hide from pay equity any more.”

CUPW and the agency are also currently in negotiations for a new collective agreement. The previous one lapsed in December, 2017, and the union has asked its members to vote on job action by Sept. 9.

Canada Post also reported Tuesday that it suffered an overall before-tax loss in the first half of 2018 of $172-million, compared with a profit of $77-million for the same period last year.

The corporation said the losses came despite a nearly 20-per-cent increase in second-quarter parcel revenue over the same three-month segment in 2017.

The carrier’s parcel service has been growing steadily over the past few years, thanks to the popularity of online shopping.

Some industry observers have predicted parcel revenue could grow even further, especially if talks to update the North American free-trade agreement result in an increase in the amount of goods Canadians can have shipped from the United States without having to pay duties.

In a tentative deal announced Monday, the United States said Mexico agreed to raise its duty-free level from US$50 to US$100.

Canada’s duty-free level currently stands at $20 while the United States allows its consumers to buy US$800 worth of goods online before duties are applied – a discrepancy that has upset the United States. 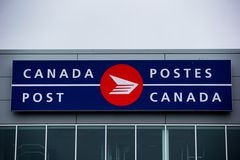