Canada’s broadcast regulator has decided not to punish Quebecor Inc. for pulling its TVA Sports signal from Bell TV screens last week as the first game of the NHL playoffs started.

Instead, the Canadian Radio-television and Telecommunications Commission late Thursday afternoon issued a mandatory order requiring the company to maintain its TVA Sports signal for Bell subscribers as a dispute continues between the two companies over the terms of carrying the channel. In a statement, CRTC chairperson Ian Scott called Quebecor’s actions “a serious violation of our regulations.”

The CRTC warned Quebecor to comply with its regulations repeatedly last week as well. However, a mandatory order is registered with the federal court – meaning it becomes a court order rather than simply a directive from the regulator. Violating those orders can result in consequences such as contempt of court proceedings, prosecution and fines.

At an urgent hearing called by the CRTC into the matter on Wednesday, the mandatory order was just one of the requests Bell made. Bell asked the regulator to either revoke Quebecor’s broadcast licence for TVA Sports entirely or to suspend it for the duration of the NHL playoffs, compelling the company to show games on its free-to-air TVA channel.

It asked that TVA be prevented from running ads during those games and that Quebecor be barred from running campaigns that “disparage” other TV providers. Bell also argued that as a result of pulling the signal last week, Quebecor should be fined the maximum $250,000 under the Broadcasting Act.

Those other requests were not granted on Thursday, but the CRTC warned that if Quebecor pulls the signal again, it would automatically suspend the TVA Sports licence until the dispute is resolved. Broadcasting without a licence can lead to penalties of $200,000 a day.

Bell said in a statement that it welcomed the CRTC’s decision.

Quebecor said in a statement Thursday evening that it would abide by the CRTC’s decision. The company added it would “assess its legal options and notes that the legality of the CRTC’s intervention is a subject of debate.”

At the Wednesday hearing, Quebecor chief executive Pierre Karl Péladeau said a suspension of its licence would risk leading to the demise of the channel.

“We have made it clear to TVA Group that we will take all necessary actions to put an end to this unfair practice,” Mr. Scott said in the statement. “Holding a licence is a privilege, not a right. With privileges come certain obligations, and we expect TVA Group to fulfill these obligations.”

According to Bell, more than 400,000 Bell TV viewers tried to tune into the first game of the NHL playoffs on TVA Sports on April 10.

Quebecor said it had “no choice” but to take the action in order to defend the value of its specialty channels.

The companies’ last agreement for Bell to carry the channel expired in 2016, according to Bell, and negotiations have been continuing. Under federal rules, broadcasters and distributors are not permitted to deny service by pulling a channel’s signal off air during a dispute.

The companies have been unable to agree on the terms for Bell to carry TVA Sports. Quebecor has said it deserves to be paid more for the channel and to be carried in Bell’s most popular TV package, where Bell has placed its own French-language sports channel, RDS. Bell has said Quebecor is asking for higher fees than its own cable service, Videotron, pays for RDS.

The fight came to a head last week when Quebecor launched a public relations campaign accusing Bell of “unsportsmanlike conduct” and threatening to pull the signal. After the company followed through on the threat, Bell successfully filed for an injunction from the Quebec Superior Court requiring that the signal be restored.

The channel returned to Bell screens last Friday evening, but the injunction was set to expire on April 23, leading Bell to ask the CRTC for a mandatory order that would maintain the signal after that date.

At the hearing on Wednesday, Mr. Péladeau argued that broadcasters are disadvantaged by a system in which they have no negotiating leverage; that the fees paid for specialty channels should be “rebalanced”; and that the broadcast regulatory system in Canada is “broken.”

Péladeau comes out swinging as Quebecor faces off against Bell at CRTC hearing
Subscriber content
April 18, 2019 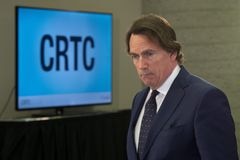 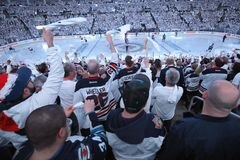