A lumpy, tarry plot of land once home to an oil well in a Southern Alberta field could soon start a new life as a solar installation, feeding power back into the grid near the small town of Taber.

It’s a pilot project that would address the growing problem of abandoned oil and gas wells in the region by converting them to solar installations. The proposal has already received support from the local municipal district and the Municipal Climate Change Action Centre (MCCAC), a partnership between the province and Alberta’s municipalities associations.

If all goes to plan, the pilot will expand across the Municipal District of Taber, home to 3,000 inactive oil and gas wells. The Alberta Liabilities Disclosure Project, a non-profit that advocates for accurate and transparent data on the province’s oil and gas liabilities, puts the cost of cleaning up those wells at close to $251-million.

Merrill Harris, the reeve of the Municipal District of Taber, lives just south of the proposed pilot site.

The oil company that owns the well has tried to return the land to its original state for as long as Mr. Harris can remember. But, "It’s a nasty old site that they can’t get cleaned up,” he told The Globe and Mail.

The company behind the conversion to solar is RenuWell. Around 50 people descended on a Taber hotel last week to hear an update from project lead Keith Hirsche.

They were interested landowners, officials from local irrigation districts and people who came from the renewable, oil and gas and utilities sectors. Other project partners scattered around the room included representatives from Medicine Hat College and from a non-profit called Iron & Earth, a project led by oil sands workers to help tradespeople transfer their skills to the renewables sphere.

Flicking through photos of inactive wells across the region, the municipality’s director of lands and leases Brian Peers spoke of fire hazards and crop losses from weeds spreading off oil and gas sites.

“Even if [oil and gas companies] are paying the rents, if wells have lived their functional life, we still want them to go. There’s no point in hanging onto something that’s never going to produce," he said.

“We’re looking for a pragmatic solution to help us here in the [Municipal District] of Taber to address these issues, and that’s where RenuWell comes in."

Mr. Harris and Mr. Peers said the plan has many potential positives. For starters, landowners being stiffed payments for the oil and gas wells on their properties have a chance to recoup some cash through a small solar installation. The switch to solar could also create jobs in the region and see the municipality rebuild its coffers, depleted after some energy companies stopped paying millions of dollars in property taxes.

Councillors quickly jumped on the idea when Mr. Hirsche approached them in December, 2018, and secured $250,000 through the MCCAC community generation capacity building program.

The program, supported by municipalities and Alberta’s now-defunct consumer carbon tax, provided funding for 12 projects exploring community-based renewable power generation facilities. Nine of those were solar projects spanning Alberta’s Sun Belt – the southern region of the province, which, according to Environment Canada data, is one of the sunniest places in Canada.

The grant moved the Taber project along and helped administration get answers on renewable power taxation policy as more farmers pursue solar options to power irrigation and other equipment in the summer.

RenuWell and the municipal district are still waiting to hear how much power companies will charge them to link the first solar panels into the grid for the pilot project, but emergency response templates are ready, taxation policies have been sorted out and a municipal online portal to let landowners apply to be part of the program is ready to go live.

“We see a lot of potential benefits for the [municipal district] if this takes off in terms of being able to have another purpose for these wells, which are currently sitting there and not generating anything for any public good," Mr. Hirsche told the meeting last week.

He thinks it could also position Taber – which years ago transitioned from coal to oil and gas – as a leader in renewable energy. Other municipalities have already registered their interest, he said, “and if we expend this into these areas, which are very good solar areas, you can see there’s a tremendous opportunity for development in the province as a whole.”

Mr. Harris said while many of his constituents aren’t over the moon about massive solar projects that sprawl over thousands of acres of grass and farmland, they’re not against using land already disturbed by oil and gas wells.

“We all see that the oil fields around here are mature. We haven’t seen oil rigs drilling around here very much. There was a little bit early this winter, but nothing like in the early 2000s when you could see four or five drilling rigs out your window every day,” he said. Bright side of the moon: China launches pioneering mission to explore valuable source of solar energy
May 24, 2018 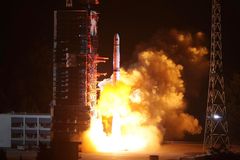 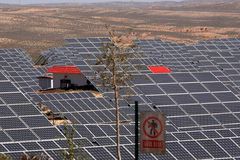