Metro Inc. will distribute gift cards to its employees next month as a thank-you gesture for doing essential work during the pandemic. But Canada’s largest private-sector union, Unifor, said that gift cards were insufficient and called on Metro and Canada’s other large grocery chains to reinstate temporary pay increases that were cut back last year.

Metro paid out bonuses in the form of gift cards in November and again in February, as COVID-19 case counts have continued to rise. Last week, the company announced it would distribute gift cards again in May. The gift cards range from $75 to $300 each, depending on the number of hours the employee worked.

That program “has fallen short,” Unifor said in its statement Wednesday, and called on Metro and other grocers such as Toronto-based Loblaw Cos. Ltd. to bring back hourly pandemic pay premiums. Sobeys owner Empire Co. Ltd. said last week that it would reinstate bonuses for workers in areas where stay-at-home orders have been imposed.

“When regions and cities enter government mandated lockdowns that close all non-essential retail, we continue to live up to our commitments and implement our Lockdown Bonus,” Empire spokesperson Jacquelin Weatherbee wrote in a statement Wednesday. Empire’s bonus ranges from $10 to $100 per week, depending on hours worked. It is currently in effect in stores and distribution centres in Quebec and Ontario. “Fundamentally, we believe this is the right thing to do.”

The Unifor statement recognized the Stellarton, N.S.-based company’s move, but said it did not account for the risk that all of its workers face.

The total cost of Metro’s first two gift-card bonuses was $16-million. Metro’s total COVID-related expenses in the second quarter were $29-million, including $8-million in gift cards.

Metro’s grocery sales have continued to surge as the pandemic affects Canadians’ eating habits, with consumers unable to dine in restaurants in many parts of the country.

The Montreal-based retailer reported second-quarter sales of $4.2-billion, up 5.1 per cent compared with the same period last year. Metro’s grocery stores saw 5.5-per-cent growth in same-store sales – a metric that tracks sales growth excluding the impact of store openings and closings during the year.

That sales growth slowed toward the end of the quarter, as Metro’s results began to be compared with the pandemic-related boom in grocery sales that began in early March last year. However, the company is expecting food sales to continue to be elevated compared with before the pandemic began.

The company, which owns grocery banners including Metro, Food Basics and Super C, has also seen a continued rise in demand for online grocery purchases: Its e-commerce sales more than tripled compared with the same period last year, rising 240 per cent.

“We’re attracting mostly new incremental business,” president and chief executive officer Eric La Flèche said on a conference call with analysts on Wednesday. Though he acknowledged there is “some cannibalization” in customers moving from in-store to e-commerce purchases, he said the online service is attracting new customers as well, and that existing customers tend to spend more with Metro when they shop both online and in stores.

Metro, which also owns the Jean Coutu and Brunet pharmacy banners, reported that same-store sales at its drugstores were roughly flat. Higher prescription drug sales were offset by lower front-of-store sales, which were affected by restrictions on selling non-essential goods in Quebec and by a milder cold and flu season. Sales growth was also muted by a comparison with the pandemic-related surge in drugstore sales last year.

Metro’s pharmacies have been participating in the COVID-19 vaccine rollout, “and we look forward to increasing the pace as soon as more vaccine supply becomes available in the coming weeks,” Mr. La Flèche said in a statement Wednesday.

The company announced its quarterly dividend will remain the same as last quarter, at 25 cents a share.

Amazon to let Whole Foods shoppers pay with a swipe of their palm
Subscriber content
April 21, 2021 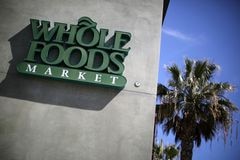 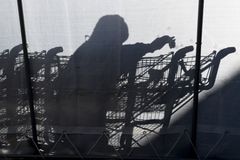 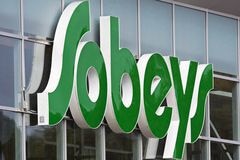