The Canadian creator of the first commercially available computer powered by quantum mechanics has stopped actively selling the device, focusing instead on offering online access to the technology.

Burnaby, B.C.-based D-Wave Systems Inc. is competing with technology giants and well-funded startups to build computers that could one day outperform the world’s most powerful processors. Since 2011, it has sold just a handful of its shed-sized devices, which list for US$15-million, to buyers including NASA, Google, Lockheed Martin and the U.S. Los Alamos National Laboratory.

“The reality is most customers can’t really buy a quantum machine and figure out where to put it and how to manage it,” chair Paul Lee said. “We’re just adapting to what everyone else [in the tech sector] has already figured out, which is to let us manage the machines” and provide online access on demand.

D-Wave began pivoting in 2018, launching a service enabling programmers to access the computing power of its machines. It provided software tools so they could build apps in code of their choice that could run remotely on its systems. Thousands signed on, developing 200-plus apps.

The man leading the strategy, Alan Baratz, has built the software foundations of breakthrough technology before: In the 1990s, he led Sun Microsystems’ effort to transform Java from a nascent language into the internet’s main software-writing platform. He joined D-Wave as chief product officer in 2017 and became chief executive officer in January.

One of his first moves as CEO was to instruct sales staff to pursue cloud deals “aggressively." Any hardware sales, he said, must be approved by him, and only “where customers for some important reason need to have a system on site, for example if they’re doing highly secure work,” he said in an interview. “But those are exceptions. I did make the decision that our focus for the foreseeable future would be on selling cloud services, not boxes.”

The strategic shift has the support of financiers. This month D-Wave raised US$40-million-plus from new backer NEC Corp. and long-standing investors, sources said. (Mr. Baratz declined to comment.) It has raised US$300-million-plus to date from Amazon CEO Jeff Bezos, the U.S. Central Intelligence Agency’s venture capital arm, Goldman Sachs, Business Development Bank of Canada, PSP Investments and others. (The Globe and Mail has granted the sources confidentiality because they were not authorized to speak publicly.)

The latest funding helps D-Wave move past a failed financing in 2018, when a prospective Chinese investor abruptly backed out after Canadian authorities arrested a top executive of China’s Huawei Technologies Co. Ltd. Existing investors instead injected US$30-million last year to tide D-Wave over.

D-Wave has the early lead in a race that includes Google, Microsoft, Intel, IBM, Honeywell and Canada’s Xanadu Quantum Technologies to build the first quantum machine that can outperform classical computers.

While early theorists believed it would take decades to build a quantum computer – which, instead of reading 1s and 0s, would harness the dynamic quantum mechanical properties of subatomic particles to perform far more complex calculations – D-Wave co-founder Geordie Rose embraced emerging theories and set out to make a machine using a process known as quantum annealing. He believed D-Wave, founded in 1999, could get to market quicker with a machine that could perform practical optimization tasks such as financial modelling, material simulation and support machine learning applications.

Despite the controversial approach (some scientists still question if the machine is even a quantum computer), Mr. Rose, who left in 2014, got investor support and global headlines. A Time cover story called his computer “the Infinity Machine.” D-Wave is set to unveil the fifth generation in 2020 and “continues to invest heavily” in the technology, Mr. Baratz said.

But the machines are expensive and complicated to host and run. To generate the quantum effects, the machine cools its semiconductor to a temperature colder than deep space. That requires months of installation work to meet specific operating conditions. With D-Wave still in development mode, the machines become outdated every few years. If they break, D-Wave staff must fly in.

Because the machines hadn’t reached their potential, they were of limited use beyond giving scientists in well-funded basic research labs a chance to tinker with cutting-edge technology. System sales lagged expectations. “Customers were reluctant to pay double-digit millions for systems [that were] not quite ready for prime time,” D-Wave director Geoff Catherwood said. D-Wave has customer contracts for US$75-million in machine and cloud deals to date.

Meanwhile the industry’s future hinges on selling online access, following broad trends in software. Microsoft and Amazon offer cloud access to early quantum computers, including D-Wave’s. Mr. Baratz said by going online, customers only have to buy the time they need, getting reliable access to D-Wave’s latest computers on its premises. D-Wave also benefits: The cloud business has higher margins, needing less overhead for sales and support. It recently unveiled a “hybrid” service for programmers to solve complex problems using a mix of quantum and classical computing.

“Why would you want to buy an expensive piece of equipment every few years and then it becomes obsolete? It makes no sense,” said Menten CEO Hans Melo. “We’re not a quantum hardware company, we’re interested in creating better proteins. [D-Wave’s cloud service] allows us to build the workflow [so] that we can keep doing everything we do.” 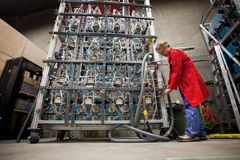 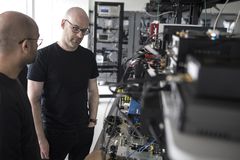 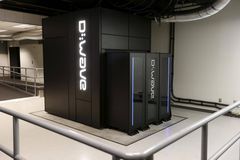