Rogers Communications Inc. will pledge to invest $3-billion in Quebec’s telecom networks on Friday as chief executive officer Joe Natale steps up his campaign to win support for a takeover of Cogeco Inc. and resolve a 20-year investment in the Montreal-based cable company.

In his first media interview since Toronto-based Rogers and Altice USA Inc., a New York-based cable company, launched a hostile $10.3-billion bid for Cogeco and subsidiary Cogeco Communications Inc. in early September, Mr. Natale said on Thursday the telecom industry “is at an inflection point” as customers begin to embrace high-speed 5G technology.

He said deep-pocketed Rogers is best suited to rolling out the next generation of gear in Quebec and keeping the provincial economy globally competitive.

Cogeco’s controlling shareholder, the Audet family, has refused to negotiate with Rogers and Altice, a position that won support from the Quebec government and the influential Caisse de dépôt et placement du Québec. Mr. Natale said Rogers wants to turn the standoff into a larger conversation around the province’s economic prospects.

“The opportunities for Quebec are immense, and we are looking to have a conversation around those economic opportunities, rather than the personalities,” Mr. Natale said.

Cogeco has already said it plans to spend $1-billion upgrading its cable networks in Quebec and Ontario over the next four years. While Mr. Natale went out of his way to praise the Audet family’s leadership, the Rogers CEO said the domestic telecom industry now features a handful of companies such as Rogers with the financial strength to compete in a technology arms race, and smaller rivals such as Cogeco that can no longer keep pace. “What’s made us successful in the past isn’t enough to make us successful in the future,” he said.

Mr. Natale compared the introduction of 5G networks – Rogers launched its Canadian service in Montreal in January – to the impact of cellphones a generation back. “The opportunities in 5G will change the economic landscape and the capabilities of this country forevermore.”

Rogers is committing on Friday to spend $1.5-billion upgrading Quebec’s networks over the next five years, including beefing up rural internet so 100,000 Quebeckers who currently have no service, or weak internet links, get high-speed service. Mr. Natale said: “COVID-19 has shown us that connectivity is the life blood of our society.”

If Rogers buys Cogeco, Mr. Natale said 95 per cent of the population would have access to 5G within five years. This month, Rogers introduced 5G in Quebec City, Gatineau and Trois Rivières, the city where Cogeco was founded in 1957.

Canadian telecom companies are expected to spend $26-billion building 5G networks over the next five years, according to a recent study by Accenture. Rogers also promised to build a 300-employee tech innovation hub in the province, with Mr. Natale sketching out a vision of a centre that does cutting-edge research and trains the next generation of engineers and entrepreneurs.

Rogers said it would keep at least 5,000 jobs in Quebec if its bid for Cogeco is successful, up from its current headcount of 3,000 employees in the province. Mr. Natale said Cogeco’s headquarters would remain in Montreal, already home to Rogers' Fido wireless service, and be led by a Quebec president.

Rogers’ charm offensive reflects that any deal would require the Audet family’s support. Cogeco executive chairman Louis Audet and his relatives control the two companies through a dual share structure. However, Rogers is the largest shareholder in both Cogeco and Cogeco Communications, with a stake built up over two decades and currently worth approximately $1.7-billion. To date, Mr. Audet has turned down all overtures from Rogers and Altice.

Mr. Natale said every telecom company faces multibillion-dollar investments in the next generation of technology and the outcome of the takeover will show “if we have an opportunity to move forward with Cogeco, or whether we are on our own.”

The proposed takeover would see Rogers acquire Cogeco’s Canadian operations for $3.4-billion, while Altice would buy Cogeco’s U.S. cable business, Atlantic Broadband. The Caisse owns a 21-per-cent stake in Atlantic Broadband. In the interview, the Rogers CEO said he “fully expected” to encounter resistance to the takeover from both the Audet family and the Quebec government when he made the offer.

“We’ve been patient money for 20 years, and now we are looking at resolving that stake, as we sit on the precipice of 5G,” Mr. Natale said.

The veteran telecom executive spent 14 years at Telus Corp., including a stint as CEO, before taking the top job at Rogers in 2017 and has made a number of successful acquisitions. He said Rogers needs to know if it’s moving forward with Cogeco’s networks or without the company’s business because “our capital plans, our approach, our strategy will be remarkably different in one circumstance versus the other.”

It is unusual for potential buyers to make a hostile offer for a family-controlled public company, as the founders can simply say no to any offer. Mr. Natale said Rogers and Altice decided to go public with their Cogeco bids, after Mr. Audet refused to sell, because “we thought it was important to make our intentions known to all stakeholders.” 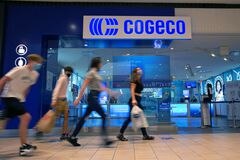