The fund is one slice of US$2-billion in Canadian investment promised by Salesforce in February when Prime Minister Justin Trudeau visited the company’s San Francisco headquarters. The fund, to be run by Salesforce Ventures, its enterprise cloud-business investment arm, is different from a standard venture-capital fund. It’s part of the company’s continuing mission to deepen its global roots and offer new tools to its 150,000-plus customers.

While the Canada Trailblazer Fund will invest in early-stage companies, the requirement for participating companies to use Salesforce’s customer-relationship management (CRM) platform will narrow the number of companies eligible to participate. Still, it remains a substantial investment in the future of Canadian cloud computing.

“We’re trying to help develop the ecosystem, and by developing the ecosystem, we want our customers to have solutions for any need they have,” said Mark Hawkins, Salesforce’s president and chief financial officer, in an interview at the company’s office in Toronto ahead of the announcement.

An ecosystem that helps Salesforce would likely benefit an ever-increasing number of Canadians. In its most recent study of the CRM software market in Canada, the research firm Gartner Inc. found Salesforce as the No. 1 vendor, with 11 per cent of market share. (SAP SE is close behind with 10.7 per cent of market share, followed by Oracle Corp., Microsoft Corp. and Adobe Systems Inc.)

The country is also home to a large amount of talent in artificial-intelligence technology development, which is playing an increasing role in Salesforce’s business. Mr. Hawkins said the company makes two billion AI-generated predictions for its customers a day to help make decisions, such as prioritizing sales leads.

Navdeep Bains, Minister of Innovation, Science and Economic Development, is scheduled to attend the fund’s announcement Thursday. “This builds on the momentum we have right now when it comes to venture capital in Canada,” he said in a phone interview. “... Investments, particularly in [venture capital] funding here, demonstrate the importance of now strengthening not only the ecosystem, but helping companies scale.”

Mr. Hawkins said the Trailblazer fund has no specific timeline, although the broader US$2-billion investment was promised over the next five years. It will focus on early-stage businesses – “people who are getting started with a great idea ready to go,” he said – although he declined to give specifics about the size of its investments.

The fund will be run by the company’s San Francisco-based business development team, with Canadian ventures as “a very specific activity,” Mr. Hawkins said. He also suggested the fund’s investments would not come with pressure to move to the Bay Area. “We’re about the local environment,” he said. “Nobody has the great ideas market cornered.”

The CRM company also recently announced a US$2.2-billion investment plan for France as it pushes toward ambitious global growth goals: US$22-billion to US$23-billion in annual revenue by its 2022 fiscal year, Mr. Hawkins says. (In its most recent fiscal year, 2018, the company posted US$10.5-billion in revenue. On a recent conference call, Mr. Hawkins noted that the company’s global ambitions have come with higher costs.)

Mr. Hawkins said the remainder of Salesforce’s US$2-billion Canadian commitment will be focused on talent, real estate, data centres and mergers and acquisitions. “We are committed to be here, and have an active presence, and bring capital here to build on a long, long-term play.” 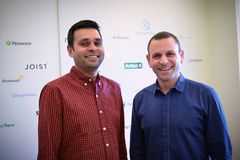 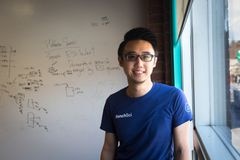