Three British Columbia Indigenous groups have vowed to keep fighting the Trans Mountain pipeline expansion after they were dealt a major legal blow on Thursday, when the Supreme Court of Canada decided it would not hear their appeal of the project’s approval.

The groups said the top court’s decision – posted on the Supreme Court website without further detail – threatens not just their traditional lands but the very fabric of reconciliation in Canada.

The Coldwater Indian Band, Squamish Nation and Tsleil-Waututh Nation sought leave to appeal in April, after the Federal Court of Appeal ruled that cabinet’s approval of the pipeline project in June, 2019, was reasonable under the law.

Trans Mountain Corp. said on Thursday it will continue work on the project, which has been under construction for several months.

The First Nations argued that Indigenous consultation before the second approval of the expansion project was inadequate. Coldwater also argued the project threatens an aquifer that is the sole source of drinking water for about 320 people living on the main reserve, about 13 kilometres southwest of Merritt, B.C.

Chris Lewis of the Squamish Nation called Thursday’s decision “flawed in so many ways.”

“It really is a message to First Nations and Indigenous people across this land that consultation and accommodation and reconciliation with Indigenous people isn’t a matter of national interest. So that hits home very hard, and it’s very concerning,” he said.

Ian Anderson, president and chief executive of Trans Mountain Corp., said in a statement the company is “pleased to continue building this nationally important project” after many years of consultation and regulatory reviews.

Construction is already well under way on the expansion, which would nearly triple the pipeline’s capacity to 890,000 barrels a day.

Workers in Kamloops began construction on the project last month, the first major step in British Columbia toward expanding the 1,150-kilometre pipeline that carries oil from just outside Edmonton to Burnaby. Trans Mountain expects 600 people will work on the project in Kamloops when it hits peak construction in late summer or early fall.

Similar activity has been under way for months in neighbouring Alberta, including drilling and tank storage installation in Edmonton, and preparation trench work all the way west to Jasper National Park and Mount Robson Provincial Park.

About 73 per cent of the expansion will use the pipeline’s existing route. The project also includes the construction of 12 new pump stations, 19 new storage tanks and three new berths at the Westridge Marine Terminal in Burnaby.

Expansion of the 67-year-old pipeline has faced numerous delays and legal hurdles since it was proposed in 2013. Its former owner, Kinder Morgan, signalled in 2018 its intent to walk away from the project. The federal government then bought the pipeline for $4.5-billion, but in August, 2018, the Federal Court of Appeal overturned approval of the expansion, citing insufficient consultations with local Indigenous groups.

The government undertook more consultations, and the project was reapproved in February.

Thursday’s decision is the end of the road for legal arguments over consultation. But Eugene Kung, a lawyer working with Tsleil-Waututh, said other possible legal and regulatory options will be reviewed and discussed by the First Nations.

Mr. Kung wouldn’t go into details about the next steps, but told The Globe and Mail there’s potential to lodge appeals in other courts, for example, to appeal route hearing decisions made by the Canada Energy Regulator, or to launch legal challenges focused on the 156 binding legal conditions that form part of the pipeline project’s licence.

Mr. Lewis said the Squamish Nation will continue a joint study with the federal government on the behaviour of diluted bitumen in water in the case of a spill, and determining how the results can be applied in the regulatory process.

“Canada has an ongoing obligation to consult with our nations on regulatory processes, and we’ll continue to state our concerns,” he said.

Tsleil-Waututh Chief Leah George-Wilson said she was disappointed by the Supreme Court’s decision, but not surprised. She said her community will explore all legal options, adding, “this is not the end of our story.”

She also said concerns her community has brought to the federal government since 2014 “remain unaddressed.”

“This project remains risky for everyone,” she said.

Mr. Kenney described the decision as a victory for First Nation communities along the Trans Mountain route that have said they either support or don’t oppose the project, and who can benefit from its construction.

“It means economic opportunity. It means saying yes to the vast majority of First Nations and Indigenous people who want to move their communities from poverty to prosperity by being full participants in responsible resource development,” he said at an event in Taber, Alta.

“It’s the moral cause of our time, and I believe that today’s decision gets us closer to a prosperous future for First Nations in Canada.” 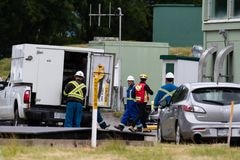 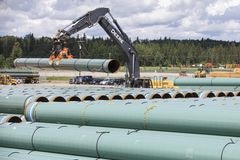 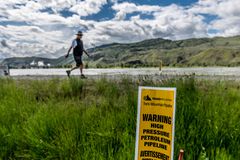