Dissident Tim Hortons franchisees are preparing to settle their long-running disputes with Canada’s biggest coffee chain for far less than their original demands.

Tim Hortons came to a tentative, non-binding settlement last week with some of its unhappy franchisees over two lawsuits they had launched.

However, some franchisees view the proposed settlement as a setback for the restaurant owners who had formed the Great White North Franchisee Association in 2017 to fight what they said were attempts by parent company Restaurant Brands International Inc. (RBI) to shift costs to franchisees, industry observers said.

“It’s sad that it ended this way,” said David Kincaid, managing partner at consultancy Level5 Strategy Group, who is in touch with some of the franchisees. “It weighs on the organization and its employees and culture.”

The settlement, the details of which must still be hammered out by both sides, calls for the company to spend $10-million over two years for regional and local marketing to build the brand, said Mark Walker, the new president of the franchisee association. And it provides for the company to pay $2-million toward the association’s legal and administrative costs.

The proposed settlement includes provisions to strengthen the governance of the elected franchisee advisory board, which the company recognizes as the sole representative of the franchisees.

The association had viewed the board as a puppet of the company and fought unsuccessfully to be recognized as the voice of the franchisees.

Mr. Kincaid said discontented franchisees, who are not ready to speak publicly, feel they have won little of what they were seeking but want to move on. The most active association members, including former president David Hughes, have already been bought out by the company and silenced after signing non-disclosure agreements.

Chad Finkelstein, a franchise lawyer and partner at Dale & Lessmann LLP, said the franchisees found themselves in a relatively weak bargaining position after a court struck down parts of their lawsuits last fall.

“If these claims were truly worth a half-a-billion dollars each, you would not expect to see a three-page non-binding term sheet submitted to the court that describes the potential monetary settlement as $5-million per year for two years to boost regional marketing activities and $2-million to be paid to the franchisees’ lawyers,” Mr. Finkelstein said.

Ben Hanuka, a franchise lawyer and principal at Law Works, said he understands why some franchisees feel the proposed settlement does not respond to some of their key demands – notably that their association be recognized as the voice of the restaurant owners and that they have a say in the costs of their supplies.

But Mr. Hanuka added that, given the circumstances, the franchisees probably fared well. “A settlement is invariably a compromise.”

Mr. Walker said having to take the case through the courts could leave the franchisees with even less money. He emphasized the settlement is non-binding and may not go ahead.

Duncan Fulton, RBI’s chief corporate officer, said the company never had a $2-billion fund to buy out dissident franchisees, as one of the lawsuits had claimed. Rather, some franchisees took advantage of changes the company made recently that improved the value restaurant owners would receive if they sold their restaurants back to RBI, he said. The move came after the advisory board and other franchisees asked RBI to review how it valued restaurants if owners wanted to sell them back to the company.

Mr. Fulton also said the company has lowered some supply costs that franchisees pay, which has increased some corporate expenses. The amounts the company charges franchisees for food and paper supplies are close to historically low levels, he said.

On Monday, RBI reported a drop in its fourth-quarter profit despite improved sales, mostly because of one-time items and accounting changes.

Still, Tim Hortons enjoyed signs of a sales recovery at existing restaurants, posting a 2.2-per-cent increase in that important metric in its fourth quarter in Canada – the highest of the past 10 quarters, said Daniel Schwartz, executive chairman and former chief executive of RBI.

The fourth-quarter profit at the Toronto-based company, which also owns Burger King and Popeyes Louisiana Kitchen, narrowly topped analysts’ outlook. On an adjusted basis, profit came to 68 cents a share, while analysts on average had expected 67 cents a share, according to Thomson Reuters Eikon. Even so, expectations had been lowered in the past week or so amid more discounting in the fast-food sector, which hurts the bottom line.

Alex Macedo, president of Tim Hortons, said sales were helped by the introduction of new products, a children’s menu all-day breakfast, stronger advertising and communications and restaurant renovations. More than 400 restaurants, or about 10 per cent of the chain, have been remodelled, with franchisees paying half the cost, company executives said.

“The business is performing very well,” Mr. Macedo said in an interview. “Franchisee profitability is up. … The plan is working.” 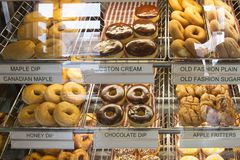 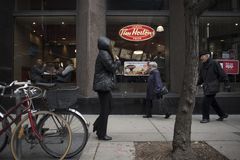 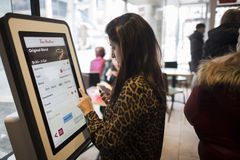