It’s the kind of event where grownups play with slime and slinkies, and a life-size Peppa Pig wanders the conference rooms alongside executives. But Toys "R" Us Canada’s annual product showcase Tuesday, designed to prepare store operators for the crucial holiday season, wasn’t all fun and games. It also coincided with the news that president and CEO Melanie Teed-Murch had resigned.

The departure of Ms. Teed-Murch, who worked her way up over 23 years from store manager to the C-Suite, comes after a tumultuous year at the toy retailer. Toys “R” Us has been in the Canadian market for 35 years, but became a stand-alone Canadian company last year when Fairfax Financial Holdings Ltd. scooped up 82 Canadian stores from the toy retailer’s bankrupt parent company. Now, the search is on for a new leader, while the company works to expand projects that Ms. Teed-Murch started to help it adapt to an uncertain future.

Wayne, N.J.-based Toys “R” Us Inc. filed for bankruptcy in September, 2017, and its U.S. and U.K. stores were liquidated. But the Canadian operations, while smaller than other markets, had been performing better. The investment firm led by billionaire Prem Watsa secured approval in April, 2018, to buy the Canadian stores for $300-million.

Since then, Toys “R” Us has been working to update its stores to cope with changing consumer tastes. To persuade shoppers who are drawn to e-commerce to come to the stores, it began experimenting with renting out space for birthday parties and hosting community events such as consultation sessions on lactation and car seat safety. It has also spent heavily on marketing to shake off the bankruptcy news, and remind Canadians that the brand still exists here.

For now, the retailer will be run by the executive team, overseen by chairman Bill Gregson, who has led Fairfax-backed retail turnarounds at the Brick and at Cara Operations (now Recipe Unlimited Corp.).

“This business will grow under Prem Watsa’s ownership, there’s no question about it,” says Frank Juhasz, vice-president of e-commerce, marketing and PR at Toys "R" Us.

Under new ownership, Toys "R" Us Canada has the flexibility to invest in the business after years of cash being siphoned off to support the flagging U.S. operations. The Canadian retailer was profitable at the time and remains profitable, Mr. Juhasz says.

In the short term, the team is focused on the holidays. Roughly 45 per cent to 48 per cent of the retailer’s sales for the year occur in those three months. To compete, the company is ditching the outdated Toys "R" Us and Babies "R" Us websites it inherited from the U.S. operations, with a relaunch in September. Along with that, the company is working on better and faster shipping options to compete with the likes of Amazon.com Inc. A deal with Purolator is in the works to secure next-day delivery, and behind the scenes it is expanding drop shipping (delivery straight from the wholesaler to the customer) as well as shipping more products from stores in order to keep warehouse costs down and to offer cheaper and faster delivery options.

But long term, the future of the business will also depend on attracting shoppers to stores. That means focusing on services. New features piloted under Ms. Teed-Murch, such as car seat technicians in stores, will begin to roll out more widely. Through the Babies "R" Us business, the retailer wants to build connections with future customers by offering personal shopper-like services to help new parents find what they need.

“They’ve got to get on the front foot for marketing. People just aren’t thinking of them now,” said Jennifer Marley, a partner at retail consultancy Sklar Wilton and Associates.

The company will also be focusing on smaller and more cost-effective stores, with one new opening in Guelph, Ont., recently and two locations that are less than 10,000 square feet opening next year. It will be reconsidering leases on big box locations as they come up.

“In the new format stores, there are toys on the counters kids can play with, they’re just really inviting places for parents and children to go,” said Joan Ramsay, director of client development and entertainment at market research firm NPD. “They’ve always done some of that but now it’s a more well-defined part of their strategy.”

Toys "R" Us will have to grapple with a burgeoning set of competitors that have either expanded toy offerings or benefited from uncertainty around the Toys "R" Us brand created by the U.S. news – those include Amazon, Canadian Tire Corp. Ltd., Walmart Inc., Indigo Books & Music Inc. and Mastermind LP.

“It’s going to be a bit more effort to take back what we had. … We’re not going to win on pure convenience,” Mr. Juhasz says. “We’re going to win because we’re going to understand you better, focus on this baby part of your life more than even Amazon will, to be perfectly honest.” 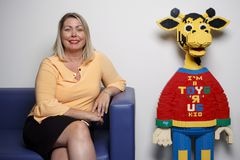 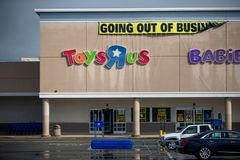