You’ve been to a party, you had a few too many. What do you do? Pop a few Aspirin and pound back water before bed, to get ahead of the hangover.

That is Alain Bellemare’s current approach to running Bombardier Inc. The Montreal-based chief executive is doing everything in his power to get in front of repayments on US$9.3-billion of debt. The loans are a hangover that stems in large part from a party that took place before Mr. Bellemare arrived in 2015, when Bombardier dropped US$6-billion on a commercial aircraft business, only to finally cut all ties with the project Thursday.

For Bombardier, debt relief is expected to come from the sale of one of the company’s two remaining divisions. Mr. Bellemare is running simultaneous talks in Europe and North America aimed at finding new owners for either the company’s rail or business-jet unit. There are discussions playing out with France’s Alstom SA and Japan’s Hitachi on the train side, while on the plane side, Bombardier is talking to U.S. conglomerate Textron Inc. and private-equity giant the Carlyle Group. While the process is confidential, European media report the sale of the train-manufacturing business is the most likely scenario.

Analysts say Mr. Bellemare is conducting this auction with a sense of urgency, and questioned that approach during a conference call Thursday to discuss Bombardier’s financial results, which were headlined by a US$1.6-billion loss last year, and free cash flow that was below the Street’s already reduced expectations.

“Why is there this sort of quick look to do all of this, if the business is in fact getting better?” Goldman Sachs analyst Noah Poponak asked Mr. Bellemare on the call. He said: “It’s starting to look more like an asset liquidation than a turnaround.”

“It’s the balance sheet. It’s not complicated,” Mr. Bellemare answered, characterizing the company’s moves as an attempt to pay down debt before any crisis hits. He told the Goldman analyst: “It’s about being pro-active.” He went on to say that Bombardier can take its time in making any decisions. With more than US$4-billion of cash and US$5.5-billion in liquidity, and no major debt repayments due until late 2021, Mr. Bellemare said the company has the financial flexibility needed to complete a turnaround that started five years ago.

However, he also offered financial guidance that was significantly below what the Street was expecting prior to the company’s release of preliminary results in January. Sales are expected to rise from US$13.7-billion last year, excluding businesses that are being sold, to US$15-billion this year. Previously, analysts expected Bombardier to sell more than US$16-billion of planes and trains.

Bombardier’s free cash flow and its EBITDA margin (that’s earnings before interest, taxes, depreciation and amortization) are also expected to fall well short of what was forecast. Ratcheting back analysts’ expectations while highlighting the need to pay down debt made for a downbeat conference call.

The true test of Mr. Bellemare’s turnaround plan is how much money Bombardier raises if it does sell a business. Just like a few Aspirin and glasses of water don’t hold off the morning-after headache, selling the transportation division might not generate enough money to truly fix the company’s debt-heavy balance sheet.

Analyst Cameron Doerksen at National Bank Financial ran the numbers Thursday and said in a report that Bombardier can expect to get between US$5-billion and US$7-billion for its rail unit. Before Bombardier gets a penny, it will need to hand a third of the cash to the Caisse de dépôt et placement du Québec for its stake in the unit. Mr. Doerksen said up to an additional US$1-billion may need to be set aside to cover pension costs.

Bombardier could sell its transportation division and still carry a relatively high debt load of US$2-billion on a cyclical luxury-jet business. While he’s bullish on Bombardier’s stock, Mr. Doerksen said selling the aviation division, which could fetch an estimated US$7.4-billion, is the better way forward for shareholders. 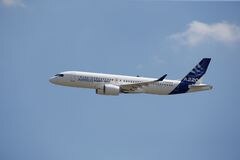 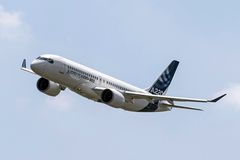 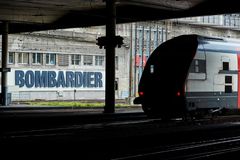