China’s latest escalation in its trade skirmish with the United States may present more a murky complication than a clear opportunity for Canadian pork and scrap aluminum exporters who look to be in the crossfire, industry watchers and trade experts said.

China announced this week that it would impose tariffs of up to 25 per cent on a list of 128 U.S. export goods, valued at US$3-billion, in retaliation for the tariffs announced by the United States last month on steel and aluminum from China and other countries. Among the key products named in China’s action are pork and scrap aluminum – two areas where Canada is a significant competitor to the United States in the Chinese market. China will apply a 25-per-cent tariff on both U.S. pork and scrap aluminum.

But while the higher tariffs on the U.S. goods would in theory give Canadian pork and scrap aluminum exporters a competitive leg up over their U.S. counterparts, experts said the integration of the North American market, global supply chains and commodity prices could make the impact much more complicated.

“It’s a bit like squeezing a balloon,” said Queen’s University professor Robert Wolfe, an expert on global trade policy. “If you squeeze trade in one place, it pops up in another.”

Canada’s pork industry is likely to feel the biggest impact from the squeeze. China is Canada’s third-biggest market for pork exports (behind the United States and Japan), with roughly $500-million in shipments of various pork products last year. But industry experts say that whatever small gains Canadian exporters might make in China would be offset by greater uncertainty and stiffer competition from U.S. pork, both at home and in third markets, as the tariffs disrupt normal trade patterns.

“The product that is not going to China from the U.S. is going to go into other markets … whether it’s Canada, Mexico or somewhere else,” said Martin Lavoie, president of Canada Pork International, which represents exporters.

Because the Canadian and U.S. pork markets are so integrated, whatever harm is caused to U.S. producers is likely to cause ripple effects here, said John Ross, executive director of the Canadian Pork Council, which speaks for hog producers. Canada, for example, sells roughly nine million live hogs a year to the United States – a business that could be indirectly hurt by the Chinese tariffs.

Canadian aluminum producers could enjoy stronger prices as a result of the U.S.-China dispute. Bart Melek, global head of commodity strategy at TD Securities, noted that the global aluminum market is in surplus, and excess output in China is the main culprit. He said slower flow of U.S. scrap into China would “limit supply growth in China somewhat,” which would improve the prices that Canadian producers receive in that market. At the same time, the U.S. tariffs on aluminum, from which Canada has been exempt, should also serve to raise prices in the U.S. market – by far the biggest market for Canadian exports of both recycled and primary aluminum.

But Canada’s scrap-aluminum industry, which sent about $240-million of exports to China last year, is well integrated with the U.S. market. Many companies operate on both sides of the border, and a considerable amount of scrap material moves across the border regularly – something that could be amplified by the new Chinese tariffs on the finished U.S. product, as U.S. producers try to find another route to move their materials.

“In the short term, these tariffs might divert more Canadian scrap aluminum exports to China, but imposing tariffs on U.S. scrap will disrupt the price and supply of material,” said Tracy Shaw, president of the Canadian Association of Recycling Industries in Ottawa.

The Chinese and U.S. tit-for-tat tariffs, which range from 10 per cent to 25 per cent, aren’t high enough to completely block exports. But they may help fuel inflation, which could spill into Canada through integrated supply chains, argued Sarah Goldfeder, a principal at lobbying and consulting firm Earnscliffe Strategy Group in Ottawa.

“The biggest threat from all this is that life will be more expensive for the consumer,” said Ms. Goldfeder, a former special assistant to two U.S. ambassadors to Canada.

The big fear is that the trade volleys that the United States and China have launched so far may be mere shots across the bow compared with what comes next. China hasn’t yet fully responded to the plans announced by the United States to slap tariffs on another US$60-billion of imported goods from China, related to accusations that China has misappropriated U.S. intellectual property. China warned on Tuesday that it will respond in “the same proportion” if the United States proceeds with those tariffs.

“This could just be the beginning,” Mr. Melek said. He said an escalating trade conflict between the two superpowers would pose a growing threat to broader global trade flows – bad news for the Canadian and global economies.

Experts believe U.S. President Donald Trump’s administration has a valid point that China is not playing fair on trade, by providing limited access to its market and often strong-arming foreign companies into transferring their technology. But they said a rising wall of tariffs is an ineffective and confrontational way to go about influencing change in China’s trade policies.

“There are a number of legitimate concerns that the president is trying to articulate and fight against, but when he reaches into the tool box, rather than finding the screwdriver, he’s found the hammer, and it’s just not working,” Ms. Goldfeder said. 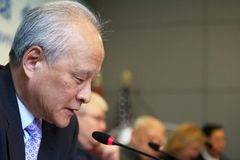 Opinion
How Donald Trump can push trade talks without damaging his ego
April 2, 2018 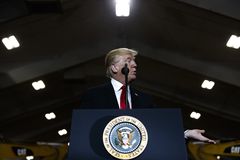 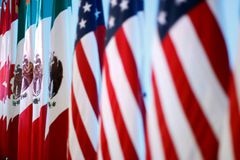 Follow David Parkinson and Barrie McKenna on Twitter @ParkinsonGlobe @barriemckenna
Report an error Editorial code of conduct
Due to technical reasons, we have temporarily removed commenting from our articles. We hope to have this fixed soon. Thank you for your patience. If you are looking to give feedback on our new site, please send it along to feedback@globeandmail.com. If you want to write a letter to the editor, please forward to letters@globeandmail.com.
Comments are closed