Automotive trailblazers such as Mary Barra, chief executive of General Motors Co., and Dhivya Suryadevara, GM’s first female chief financial officer, are breaking barriers in the U.S. auto industry. And their impact is trickling into this country.

At GM Canada, the challenge is how to attract more women into the male-dominated business, which includes building out the staffs of its technical centres in Ontario. Aside from recruiting at the university level, one solution is to get girls interested in the STEM (science, technology, engineering and math) fields as early as elementary school.

“We have to do better in some areas, such as what we’re doing in the case of STEM, to really open young girls’ eyes to the potential of careers,” says Amy Martin, vice-president of finance and chief financial officer at Oshawa, Ont.-based General Motors of Canada.

The GM initiatives include hosting STEM summer camps with dedicated all-girls weeks, held in partnership with the University of Ontario Institute of Technology, Queen’s University, the University of Waterloo and McMaster University. At the high-school level, GM supports 40 teams with female students who compete in the FIRST Robotics Competition.

Education is key to engaging and enticing a younger generation of girls to enter STEM programs, says Biljana Rajic, an engineer in computer-aided engineering at GM’s Canadian Technical Centre (CTC) in Oshawa.

“I didn’t get an education in this system, but I was exposed to this system through my kids," Ms. Rajic says. “I talked to their teachers in the early stage about being passionate about math and science. It is so wrong how it is presented to kids here. Right from the beginning math is – wow, that’s hard! … It’s not. Math is so fun.”

She says STEM education breaks the mould, giving a girl the basics of problem-solving skills. Her father, husband and two daughters are all engineers.

Currently, GM’s CTC campuses employ nearly 700 engineers. The goal is to increase the head count to 1,000, in part by attracting more women to typically male-dominated jobs. The ratio of women to men is now one in four. (GM has said the closing of its assembly plant in Oshawa later this year, resulting in approximately 2,500 job cuts, won’t affect any engineering positions at CTC campuses.)

“General Motors and the industry are in need of engineers – females, in particular, because we have skills as females compared to males that they don’t have, no matter how talented they are,” Ms. Rajic adds. “We are multitaskers. That’s very valuable in the engineering world. We are good listeners."

Laura Barlow, 30, is an engineer working with the active safety and autonomous team at CTC in Markham, Ont. She’s been with GM for seven years, changing roles approximately every two years. While she has had opportunities, she has also faced challenges. When she started, she created the diagnostics code for the on-board computer system of a brand new vehicle. But it was riddled with problems, which proliferated into other vehicles, attracting the attention of high-level executives in Detroit demanding a fix, fast. She worked around the clock with her team and fixed the issue, and learned some valuable lessons along the way.

“There was [a] woman chief engineer – she was nothing but supportive. There was a male chief engineer that was a little bit different – more of the screaming, ‘What are you doing to get this done?’ As a young engineer, to see the differences in the leadership styles was extremely impactful to me, to say I want to be that type of leader,” Ms. Barlow says.

GM also wants to attract engineers such as Dorothy Lui, who may have never considered a career in automotive. The 29-year-old wasn’t into cars when she joined GM in 2018 as a controls system engineer, lateral controls, in the safety and autonomous group.

“In my team, we have 16 people and my manager is a woman," Ms. Lui says. “It provides a great role model for myself.”

Ms. Lui is accustomed to being the “odd-man-out.” Her undergraduate engineering class at the University of Waterloo had 120 students – four of whom were women. Ms. Lui is part of the Women’s Council – a direct initiative from Ms. Barra’s office that supports women globally with webinars, seminars and annual symposiums.

"Being in a group, getting a different perspective and sharing your experience definitely helps. That’s probably why we have so many female leaders at GM,” says Ms. Rajic, another council member.

“It’s exciting to see women like Mary Barra who is a STEM professional, an engineer, and Dhivya, our CFO, an accountant and an MBA, leading the finance organization. As a woman, it’s an exciting time to be at GM. We’re filling the ranks. Mary and Dhivya will not be the last. There will be more women in the future,” Ms. Martin says. 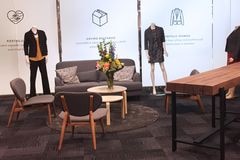 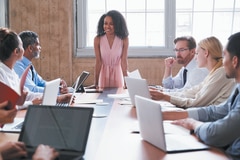