A seriously smart idea for advancing Canada’s national discussion on a guaranteed basic income entered debate in the House of Commons this week. It may exit without getting much further.

How does Julie Dzerowicz, the Liberal backbencher who is spearheading the idea, feel about that?

“It doesn’t matter,” she said in an interview this week. “The conversation around some sort of a guaranteed basic income is not going to go away.”

Ms. Dzerowicz is the sponsor of Bill C-273, the National Strategy for a Guaranteed Basic Income Act, which began its second reading Monday. As she noted in her speech on the floor of the House, it marked the first time a bill on basic income has ever been debated by Parliament. It’s tangible evidence of how the impact of the pandemic, and Ottawa’s policy responses to it, have moved basic income from the margins and into the national conversation.

A guaranteed basic income could be a stabilizing force for Canada

Still, it is not part of the government’s formal legislative agenda, but rather a private member’s bill. Such bills are afforded very little time in a busy parliamentary session, and, typically, have little chance of succeeding.

The opposition Conservatives clearly don’t like the bill, and the Bloc Québécois and NDP have reservations. Time expired on Monday only halfway through the debate; with Parliament scheduled to adjourn next week, the earliest that second reading could resume is the fall. There’s a pretty good chance a federal election will be called before the bill could clear all its legislative hurdles – which would wipe the legislative slate clean. Bill C-273 would die on the vine.

That’s too bad, because what Ms. Dzerowicz has proposed is precisely what Canada needs to advance the discussion on the pros and cons of basic income. The bill would commit the government to develop “a national strategy to assess implementation models” for a guaranteed basic income. Crucially, that would entail running a series of pilot programs with various provinces to test different basic income models, and gather data on their costs, benefits and unintended consequences for recipients, communities and governments.

Such hard evidence is a key ingredient missing from Canada’s basic income debate. We’re relying largely on research conducted in other countries and a couple of domestic experiments that are either outdated (Manitoba in the 1970s) or incomplete (the aborted Ontario pilot in 2018-19).

“There’s a lack of understanding of how would we apply guaranteed basic income on a large scale,” she said. “Let’s just test it.”

Even from the short (one-hour) debate on the bill Monday, it was clear that there’s appetite among most political parties for at least the principle of a basic income. Only the Conservatives spoke out against the very concept, citing the potentially massive cost and suggesting that it would act as a disincentive to work.

The NDP favour a basic income as an addition to existing government benefits and programs, but worry that it would be used as an excuse to eliminate a wide range of targeted support programs on which the country’s most vulnerable rely. (This is the key concern raised in the final report of British Columbia’s government-appointed panel on basic income, released last December, which recommended against a basic income, and favoured filling gaps in the existing web of government supports instead.)

For the Bloc Québécois, the sticking point isn’t the concept, but the jurisdiction. It argues that any such program should be in the hands of the provinces, not the federal government.

As for the Liberals themselves, Ms. Dzerowicz was a bit vague about how much support there is for guaranteed basic income in the senior ranks, saying only that “there is interest” among some members of cabinet. But there are signs of growing momentum within the party to pursue basic-income policy options, with pilots being a likely starting point.

Prime Minister Justin Trudeau said in a virtual town hall last December that basic income is “not something that we see a path to moving forward with right now,” but acknowledged that “I think it’s a very important conversation to have.” It’s notable that the Prime Minister has discussed the idea with Prince Edward Island Premier Dennis King, who has been seeking federal funding for a provincewide basic income pilot in the country’s smallest province (pop. 160,000).

At the Liberal national convention in April, the party’s grassroots membership overwhelmingly passed a basic-income resolution, ranking it second behind only national pharmacare in terms of priority for the party. Ms. Dzerowicz’s bill was seconded by Wayne Easter, a long-time Liberal MP who is chairman of the House of Commons Standing Committee on Finance – a significant endorsement from an influential voice in caucus on economic matters.

It all sets the stage for the Liberals to adopt a more formal commitment to something like pursuing pilot programs, in conjunction with provinces, perhaps even in its platform for the next election. There is enough support, both within the party and without, to take this to the next step.

“No matter what happens with my bill, this conversation is going to continue to move forward,” Ms. Dzerowicz said.

Opinion
Housing costs are a gaping hole in Canada’s social safety net – and it’s getting bigger
Subscriber content
May 6, 2021 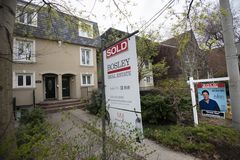 Pandemic’s seismic shifts are reshaping the way Canadians work, study says
Subscriber content
February 11, 2021
Follow David Parkinson on Twitter @ParkinsonGlobe
Report an error Editorial code of conduct
Due to technical reasons, we have temporarily removed commenting from our articles. We hope to have this fixed soon. Thank you for your patience. If you are looking to give feedback on our new site, please send it along to feedback@globeandmail.com. If you want to write a letter to the editor, please forward to letters@globeandmail.com.
Comments