The reports continue to pile up and the verdict remains the same: Venture capital firms have a gender problem. Specifically, investors in early-stage companies have too few women on their teams and that has become a huge hurdle for female entrepreneurs to leap over.

Recently, Female Funders, an organization dedicated to increasing female representation in angel investing and venture capital, published a study showing that only 14 per cent of partners at major Canadian firms are women. It follows a report last year by MaRS Discovery District, PwC and #movethedial that showed women are hugely underrepresented in Canada’s tech industry, with only five per cent of founders being female.

It doesn’t take a forensic accountant to spot the link.

Female startup founders have to work harder and receive far less investment than their male competitors. Stephany Lapierre, founder of tealbook, a fast-growing tech venture, says she never thought of herself as a female founder until she started pitching for investment. Suddenly, her gender and status as a mother entered the conversation.

As female VCs, we know this isn’t straight-up gender bias. But men and women have a different lens on investment. Where a woman might look at a female founder with kids and see grit and hustle, a man might see a mompreneur. Without women at the table, perspectives that represent half the population – and customer base – are being lost.

That’s why it’s vital that more women reach investment decision-making roles in VC firms. For this to happen, we need to do four things:

First, VC firms must put gender-balance front and centre in their recruitment, particularly for senior positions. There are growing numbers of women in the lower ranks at firms, which – glass ceilings notwithstanding – should create a strong farm team of future partners. All firms should commit to gender-balanced recruitment lists for managerial roles. Companies should also get creative in finding ways to engage talented women as part of their networks. One approach is to offer senior women in tech companies or large corporates roles as venture partners, which allow them to get their feet wet in the VC world with exposure to deals and mentorship on a part-time basis.

Second, limited partners – the people and organizations whose money is in a fund – need to wield their influence. They already take a keen interest in VC firms’ succession planning, so it’s not much of a stretch to add a layer of due diligence around promotion and investment in women. The federal government is already using a similar strategy, demanding that firms participating in its venture capital fund of funds demonstrate a commitment to gender equality.

Third, give more female angels their wings. We talk with many wealthy women who are interested in investing, but aren’t sure where to begin. To get this capital off the sidelines, we need to build out the support network for female angels. There are some encouraging signs. The National Angel Capital Organization is making a proactive effort to educate new and aspiring angel investors through their programs and Female Funders, which runs an Angel Academy, has partnered with it to engage and educate women executives on angel investing. We need more such networks.

Finally, we have to invest in female entrepreneurs. When female founders exit, many of them will recycle their capital and expertise back into the startup ecosystem. Take Eva Lau, who co-founded e-reading platform Wattpad and now also runs Two Small Fish Ventures, or Nicole Verkindt, founder of procurement platform OMX, who became part of the Next Gen Den on CBC’s Dragon’s Den. Investors such as these change the dynamic.

Investing in women entrepreneurs isn’t just the right thing to do, it’s also the smart thing to do. Companies with a female founder have been shown to outperform all-male competitors. Despite this, when StandUp Ventures was founded last year to back female-led tech startups, many in the industry were skeptical that there even was a pipeline of women-led firms worthy of funding. Turns out there are plenty – StandUp has already made five investments. If more funds step up to the plate and back female entrepreneurs now, we won’t be having this conversation about female VCs again in a decade.

Change isn’t going to happen overnight. VC firms are very different creatures from the startups they fund: They’re conservative and built for stability, not agility. But we can start to turn the ship now and ensure future generations of entrepreneurs are judged only on the strength of their ideas. 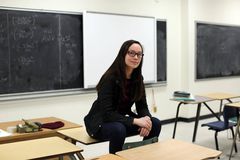 Opinion
Bridge the gender gap or women – and business – will be set back
January 12, 2018