A picture of the refineries in the Southwestern Ontario city once graced our $10 bills. The country’s first oil boom played out near Sarnia in the 1850s, spawning a sector that now anchors the national economy.

What would it say about the domestic oil and gas industry’s prospects though if one of the world’s largest energy companies, Royal Dutch Shell PLC, exits a six-decade investment in Ontario refineries at the same time it sells the remainder of its interest in Alberta’s oil sands? Brace for another foreign vote of non-confidence in the future of fossil fuels in Canada.

Shell put its Sarnia operations up for sale last year as part of a global drive to concentrate refining in three hubs – the U.S Gulf Coast, northwest Europe and Singapore. Shell acquired the Ontario property in 1963. Its 350 employees now produce gasoline and solvents. The company also owns a facility in Fort Saskatchewan, Alta., that converts bitumen from the oil sands into refined products.

As recently as a decade back, Shell talked about expanding its Canadian facilities. The tone is now far different. In a July conference call, Shell executives said they are well down the road to reducing their refineries to nine sites from 18. In other words, the sale of Canadian properties is imminent.

A number of institutional investors and the energy analyst at RBC Dominion Securities predict Shell will walk away from more than just Sarnia and Fort Saskatchewan in the near future.

A blockbuster energy deal may be in the works, RBC analyst Greg Pardy said in a report last week. Based on conversations with industry executives and investors, Mr. Pardy said Canadian Natural Resources Ltd., one of the country’s largest energy companies, is contemplating buying Shell’s refineries in Ontario and Alberta, its 10-per-cent stake in the Athabasca Oil Sands Project and Chevron Corp.’s 20-per-cent position in the Athabasca property. The total price tag on this shopping spree is estimated to be $6.3-billion to $8.5-billion.

The acquisitions make sense on every level.

Chevron would part with its position in Athabasca to pay down debt, according to Mr. Pardy. Its oil sands stake is worth at least $2.6-billion and Chevron recently announced a deal to acquire Noble Energy for US$5-billion.

Canadian Natural, guided by Saskatchewan-born billionaire Murray Edwards, already acquired 70 per cent of the Athabasca project three years ago, for $12.5-billion. Shell and Marathon Oil were the sellers.

Mr. Edwards has shown he is willing to buy businesses during a pandemic and oil price war, as Canadian Natural snapped up natural gas play Painted Pony Energy Ltd. in August, a transaction worth $461-million, including debt. In his report, Mr. Pardy said: “Acquiring the 30-per-cent balance of Athabasca and establishing downstream integration in Canada are logical steps in Canadian Natural’s evolution, and could serve to de-risk its business structure via cash flow diversification.”

If a transaction happens, it would cement Calgary-based Canadian Natural’s position as a dominant Canadian oil and gas producer and, along with domestic rivals Suncor Energy Inc. and Imperial Oil Ltd., a champion of the oil sands.

However, Shell would be the latest in a string of global companies to exit the oil sands, and also dump energy infrastructure such as the Sarnia refinery that is essential to this sector’s future. ConocoPhillips, Kinder Morgan, Devon Energy and Norway’s Equinor ASA have also sold off Canadian holdings.

Exploiting the wealth contained in Alberta’s oil sands and building the next generation of Canadian refineries will take a deft touch in balancing carbon emissions with demand for energy. The task will take ingenuity, and enormous amounts of capital. Losing the support and wallets of major foreign players such as Shell makes tapping the oil sands in an environmentally acceptable manner even more challenging.

Rare spat between Serbia and Russia after U.S.-brokered deal
September 6, 2020 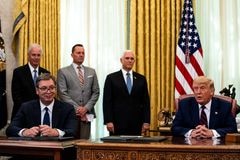 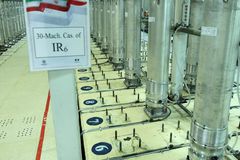