The number of Americans filing first-time claims for jobless benefits unexpectedly dipped last week while staying extremely high, with the labour-market recovery appearing to stall as a raging COVID-19 pandemic threatens to overwhelm the country.

Layoffs announced by U.S. companies surged 18.9 per cent in December, other data on Thursday showed. Though services-industry activity accelerated last month, employment fell. The reports followed on the heels of news on Wednesday that private companies shed workers in December, heightening the risk that the economy lost jobs last month for the first time since April.

“The labour market will struggle this winter because of surging COVID-19 cases,” said Ryan Sweet, a senior economist at Moody’s Analytics in West Chester, Pa. “The good news is additional support is likely coming in the first quarter.”

Initial claims for state unemployment benefits dipped 3,000 to a seasonally adjusted 787,000 for the week ended Jan. 2, compared with 790,000 in the prior week, the Labour Department said. Economists polled by Reuters had forecast 800,000 applications in the latest week.

Claims were likely held down by difficulties adjusting the data for seasonal fluctuations around this time of the year. Unadjusted claims jumped 77,400 to 922,072 last week. Including a government-funded program for the self-employed, gig workers and others who do not qualify for the regular state unemployment programs, 1.08 million people filed claims last week.

Elevated claims are in line with other data that have suggested the economy was taking a beating from business restrictions and retrenchment in consumer spending because of the pandemic. Minutes of the Federal Reserve’s Dec. 15-16 meeting published on Wednesday showed policy makers expected soaring coronavirus cases “would be particularly challenging for the labor market in coming months.”

COVID-19 cases in the United States have jumped to more than 21 million, with the death toll exceeding 360,000 since the virus first emerged in China in late 2019, according to the U.S. Centers for Disease Control and Prevention.

In a second report on Thursday, global outplacement firm Challenger, Gray & Christmas said U.S. companies announced 77,030 job cuts in December, up from 64,797 in November. That brought total layoffs in 2020 to a record 2.305 million, a 289-per-cent surge compared with 2019. Nearly half of the job cuts were attributable to the pandemic.

Separately, the Institute for Supply Management (ISM) said its index of services industry employment dropped to a reading of 48.2 last month from 51.5 in November. The ISM said comments from companies included “less staff needed in restaurants due to restrictions” and “we had to reduce our work force even further.”

U.S. stocks were trading higher as investors bet on more pandemic aid under a Democrat-controlled Congress. The dollar gained versus a basket of currencies. U.S. Treasury prices fell.

The government is scheduled to publish its closely followed employment report for December on Friday. According to a Reuters survey of economists, non-farm payrolls likely increased by 71,000 jobs after rising by 245,000 in November.

That would be the smallest gain since the jobs recovery started in May and mean the economy recouped about 12.5 million of the 22.2 million jobs lost in March and April.

Jobless claims remain above their 665,000 peak during the 2007-09 Great Recession, though they have dropped from a record 6.867 million in March. The government in late December approved nearly US$900-billion in additional fiscal stimulus, including the renewal of a US$300 unemployment supplement until March 14.

Government-funded programs for the self-employed, gig workers and others who do not qualify for the state unemployment programs as well as those who have exhausted their benefits were also extended in the package.

The claims report also showed the number of people receiving benefits after an initial week of aid declined 126,000 to 5.072 million in the week ending Dec. 26. But many have exhausted their eligibility, limited to six months in most states. About 4.517 million workers filed for extended unemployment benefits in the week ending Dec. 19. Roughly 19.177 million people were receiving benefits under all programs in mid-December.

The economy plunged into recession in February. Though it is expected to have expanded at around a 5 per cent annualized rate in the fourth quarter, the bulk of the rise in gross domestic product will likely come from the rebuilding of inventories.

A fourth report from the Commerce Department showed the trade deficit widened 8.0 per cent to US$68.1-billion in November, the highest since August, 2006. The deficit was boosted by a jump in imports.

“Growth will be very weak in early 2021, but should pick up in the spring as vaccine rollout continues, and stimulus funding supports consumer spending,” said Gus Faucher, chief economist at PNC Financial in Pittsburgh. 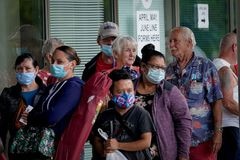 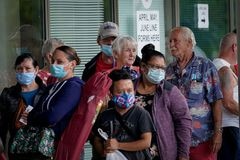