A natural gas line erupted in a ball of flames that could be seen for miles over a residential community in rural Kentucky on Thursday, killing one person and setting several houses on fire, a local sheriff said.

The blast, in Moreland, a community about 65 kilometres south of Lexington, was the second so far this year on Canadian energy company Enbridge Inc.’s Texas Eastern natural gas pipeline after an incident in Ohio in January that injured at least two people.

A woman killed in Thursday’s explosion was found outside her home, Lincoln County Sheriff Curt Folger said. Local media said at least five others were injured in the blast.

“We’re trying to get a head count,” Mr. Folger said, adding that about five homes had caught fire and that firefighters were working to extinguish those blazes.

Flames from the explosion rose about 100 meters in the air, Lexington television station WKYT reported, citing emergency managers. The WKYT meteorologist said the fire showed up on radar.

“It woke us up and it was just a big roar and it was fire going up into the sky as far as you could see,” area resident Sue Routin told Lexington television station Lex 18.

The pipeline was 76 centimetres in diameter, Mr. Folger said, and was shut off after the blast.

The Texas Eastern pipeline connects Texas and the U.S. Gulf Coast with states in the Northeast and Mid-Atlantic regions, according to the company’s website.

In January, the pipe experienced an explosion in Ohio that caused producers in Appalachia to reduce output by about one billion cubic feet per day (bcfd) for about a week.

One billion cubic feet is enough to supply about five million U.S. homes.

Separately, Enbridge suffered another blast on a pipeline, known as the Westcoast system, in British Columbia in October.

The Kentucky blast cut the amount of gas flowing on the pipe south of Enbridge’s Danville compressor station in Kentucky to zero.

Prior to the explosion about 1.7 bcfd of gas was moving south through the area in Kentucky from the Marcellus and Utica shale in Pennsylvania, Ohio and West Virginia toward the Gulf Coast, according to pipeline flow data from Refinitiv.

That represents about 2 per cent of the 90 bcfd of gas currently being produced in the Lower 48 U.S. states.

The gas was supplying utilities along the pipe route and other consumers, including industrial facilities and liquefied natural gas (LNG) export terminals on the Gulf Coast.

Energy traders said the pipe shutdown would be disruptive to affected customers and would likely boost gas costs, at least temporarily, but noted those consumers should have no problem switching to other fuel suppliers in the Gulf Coast or Northeast until Enbridge restores service.

Producers in the Appalachia region, meanwhile, were expected to reduce output by about 1 bcfd to around 31.0 bcfd on Thursday from 32.2 bcfd on Wednesday, according to preliminary pipeline flow data from Refinitiv. Traders, however, noted the preliminary data are often revised as more information becomes available.

Enbridge told customers using the pipe that it could not immediately estimate when the pipe would return to service.

“Our first concern is for those impacted by this incident and ensuring the safety of the community,” Enbridge said in a statement, noting it had isolated the affected line and was working with emergency responders to manage the situation.

Enbridge said the U.S. National Transportation Safety Board had assumed control of the incident site and the company was supporting its investigation. 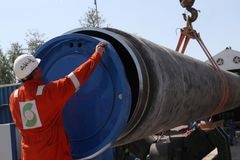 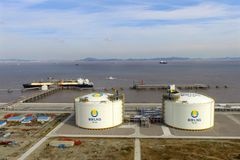 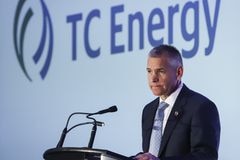