The federal government is exploring the potential for First Nations investment in the Trans Mountain expansion project as Ottawa and Alberta negotiate with Kinder Morgan Inc. to get the project back on track.

Several First Nations leaders who support the project in British Columbia say they would be interested in assuming an equity stake in it, depending on the terms.

It’s unclear where the money would come from. Either the bands would have to supply the money themselves, or make an investment backed by the federal government.

Asked about the potential for Indigenous investment, federal Natural Resources Minister Jim Carr would say only that the government is pursuing all options in its discussions with Kinder Morgan. Those options include the First Nations along the proposed pipeline expansion’s route taking an equity position, a source close to the negotiations said.

The participation by First Nations would constitute part of a broader financial backstop Ottawa and Alberta are looking to provide to Kinder Morgan in an effort to reduce the risk that political battles will result in further project delays and rising costs for its shareholders.

Kinder Morgan has signed 43 impact-benefit agreements with First Nations along the route, including 33 in British Columbia. The agreements cover a range of issues, including environmental monitoring, contracting opportunities, job training and direct revenue payments to the community. The company said those deals are worth $400-million over an undisclosed number of years.

An ownership role for First Nations communities would give those communities a greater stake in the success of the project and offset, to some degree, the political fallout arising from Ottawa’s determination to proceed over the opposition of several First Nations who live near the coast.

There have been no official discussions of an equity stake between Ottawa and the First Nations, as the federal and provincial governments remain focused on coming up with a package that would secure Kinder Morgan’s commitment to proceed, the source said.

Michael LeBourdais, chief of the Whispering Pines Indian Band near Kamloops, B.C., said Canada’s major banks have approached him, proposing the means to finance an equity investment in the Trans Mountain pipeline.

The question of how to finance an equity stake in the pipeline will be discussed at a meeting slated for next month between First Nations groups that have signed benefit agreements with Kinder Morgan, he said. Some are also seeking additional revenues from the project.

“Buying the pipe isn’t the problem, right? You just need cash,” he said. “That’s just one of the ways this is going to get done.”

In a release on Tuesday, the Calgary-based Indian Resource Council said Ottawa and Kinder Morgan should ensure Indigenous participation in the Trans Mountain expansion. “It is imperative that Indigenous people are included in all discussions and decisions relating to Kinder Morgan and other pipelines,” said Stephen Buffalo, president of the council that represents 130 First Nations in Canada that have oil and gas rights. “We want and demand participation and equity ownership in these projects.”

The Simpcw First Nation signed an agreement with Kinder Morgan two years ago, and remains supportive of the pipeline expansion, its Chief, Nathan Matthew, said in an interview Tuesday.

Simpcw – whose territory covers a third of the pipeline’s distance – would be open to taking an equity stake in Trans Mountain, Chief Matthew said, noting the band has taken ownership interests in other resource projects.

“When it comes down to economic issues, we’re interested in a number of ways to get a benefit out of these projects,” he said. “We have been talking with other First Nations along the route, but there’s nothing we’re able to report.”

Chief Ernie Crey of the Cheam First Nation said his community also supports the pipeline expansion and would consider making an equity investment under the right conditions.

While energy companies have long touted aboriginal ownership as an important tool to resolve differences, such agreements provide no guarantee that a project actually gets built.

Enbridge Inc. funded stakes valued at $300-million for 26 Indigenous groups in its Northern Gateway project, covering a 10-per-cent slice of the project’s equity.

However, the proposed $7.9-billion pipeline to Kitimat, B.C. was killed by the Liberal government in 2016, at the same time it approved Trans Mountain.

Tsleil-Waututh First Nation is one of several that has challenged the federal approval in court and is now awaiting a ruling. Its members are also participating in direct action to block construction work at the Kinder Morgan terminal in Burnaby, B.C.

Tsleil-Waututh Chief Maureen Thomas said on Tuesday that support for Trans Mountain from other First Nations has no impact on her own community’s determination to fight it.

“I have no ill feelings towards them; whatever they’re doing is fine,” Chief Thomas said after appearing at a Commons committee hearing in Ottawa on Tuesday. “The only community I speak for is the Tsleil-Waututh and my mandate comes from my people – that we’re here to stop Kinder Morgan.”

She noted her people have lived on the Burrard Inlet for time immemorial and fear an oil spill would devastate their way of life. 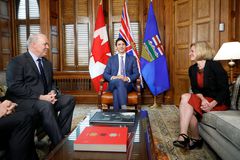 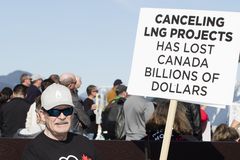