When BlackBerry Ltd. divested about three million square feet of real estate in Waterloo, Ont., and area in 2014, some out-of-town naysayers warned of a calamitous office space glut in a region once dominated by the former tech titan.

“With 2.8 million square feet coming back on the market, there was a significant reluctance from the out-of-town investor to consider buying real estate in the Region of Waterloo,” says John Whitney, owner and chief executive officer of Whitney Commercial Real Estate Services. A fourth-generation Waterloo real estate broker, he helped BlackBerry decades earlier to acquire some of the same buildings that went on the chopping block. He says the skeptics told him, “You are crazy; you will never deal with all that space.”

It took about two years to upend the gloomy predictions. Over 26 months, public- and private-sector entities scooped up 2.3 million square feet of BlackBerry’s 2.8-million-square-foot portfolio over 21 buildings in the Waterloo area. After a 10- to 20-per-cent dip in 2014-15, lease rates began to recover last year.

Several factors helped fuel the absorption, including: packaging the real-estate assets in bulk; supportive municipal economic development officials; and a soon-to-open light-rail transit line with a stop by the BlackBerry buildings beside the University of Waterloo. Most significant, though, was the role of talent, including a cadre of laid-off BlackBerry engineers, in attracting new employers to high-end office space near desirable university graduates.

Among those who saw talent’s potential as a magnet was John Grassi, CEO of Spear Street Capital, a San Francisco-based privately owned real estate investment firm that purchased BlackBerry’s holdings in Waterloo, Mississauga and Ottawa for $305-million in 2014. New to Canada, Spear Street had a track record in the United States of buying and repurposing excess real estate from technology companies experiencing what he describes as “a change of life.”

Citing Google’s recent arrival in Waterloo and others who followed, Mr. Grassi said their location decision is “really about the talent.” In the United States, he notes, “Google is huge in Pittsburgh,” home to Carnegie Mellon University. “It’s a great marriage.

“We thought the same thing about Waterloo. The university is there and the talent is there and a lot of these people don’t want to leave Waterloo.”

Karl Innanen, managing director of the Kitchener, Ont., office of Colliers International, says Waterloo shared similarities with technology hub cities such as San Francisco, Boston and Austin, Tex. “We had always heard that when a big company moves out or is in decline, it [renewal] is more about the human capital than the real estate. ... Companies came in to capture the people, the great talent and then repopulated the buildings with people.”

At its peak, BlackBerry’s holdings represented one-third of Waterloo’s office inventory, according to Ryan Mounsey, senior economic development advisor for the city, overshadowing others competing for choice space. “In some ways, BlackBerry’s demise was the best thing that happened to every other company in town,” he says.

A former BlackBerry building at 455 Phillip St., which Mr. Whitney had sold to the company in its heyday decades earlier, exemplified the renewal challenge. At 150,000 square feet, the building “was one of the better pieces of real estate we acquired and we fixed it up and spent a fair amount of money on it ... but it sat for a period of time,” says Mr. Grassi.

In turn, the City of Waterloo rebranded Phillip Street as part of an “Idea Quarter,” including a startup accelerator and the David Johnston Research and Technology Park (opposite the University of Waterloo), to lure technology, retail and service industries.

A few kilometres away, a Waterloo-founded but now Australian-owned engineering and environment construction and consulting company was poised to consolidate six offices in the same area.

Its location, a stone’s throw from the university and a future light-rail transit station stop, matched Mr. Ferguson’s office checklist. “We need to be in sight of the University of Waterloo,” he says. “We need to be able to attract talent and we want our people to be able to see the benefit of having the LRT.”

In May of 2018, GHD fully moved into its new quarters, utterly transformed from the building that Spear Street opened for a realtor tour three years ago. The stylish interior embodies the latest in workplace design – agile seating, retractable glass-paneled meeting rooms, a gym, a prayer and wellness room, on-site catering and cafés on two floors offering gourmet coffee, tea and soft drinks.

“We left a Pinto and now we are driving a Ferrari,” quips Mr. Ferguson.

The talent factor also loomed large when former senior ex-BlackBerry employees, reluctant to leave Waterloo, decided to use their résumés to import their next employer.

David Starks led a cadre of senior managers laid off from BlackBerry in early 2014, contacting major cellular radio companies to locate in Waterloo.

He and his colleagues were determined to stay for the reasons that first brought them here: housing, quality of life and the public school system. “We can stay here and we have a road map for all our kids’ futures,” he says.

At the same time, Texas-based Coherent Logix Inc., a semiconductor startup innovating in low-power, high-performance chips, had an immediate need for top engineers with the expertise of Mr. Starks and a dozen or so of his colleagues. Soon after leaving BlackBerry, they were hired to open Coherent Logix’s first Canadian office, a well-equipped former BlackBerry shop on the doorstep of the University of Waterloo.

BlackBerry, once called Research In Motion, is a fraction of its former self. Here’s a timeline for the disposition of the bulk of the company’s portfolio in the Waterloo region:

July to December of 2014: Spear Street sells 90,400 square feet to Quantum Valley Investments (co-founded by Mike Lazaridis, a co-founder of BlackBerry) and an additional 200,300 square feet to Waterloo Innovation Network.

July of 2015: Spear Street sells two buildings in nearby Cambridge, Ont., for a total of 248,800 square feet, to CanFirst Capital. Separately, a 500,800-square-foot building is sold to Dare Foods.

December of 2016: Spear Street sells three buildings for a total of 481,000 square feet, only partially leased, to CanFirst Capital.

May of 2018: Of the original BlackBerry portfolio in the Waterloo area, just 150,000 square feet remains vacant. 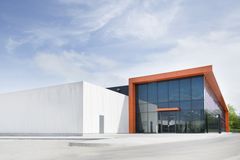