An external committee reviewing governance at Nissan Motor Co said on Wednesday there were enough facts to suspect violations of laws and the private use of company funds by ousted chairman Carlos Ghosn.

Following a three-month audit of Nissan’s governance after a scandal that shook the global auto industry, the committee put the blame squarely on what it called Ghosn’s concentration of power. It also acknowledged Nissan CEO Hiroto Saikawa’s role in Ghosn’s salary arrangement at the heart of the scandal.

Twenty years to the day since French automaker Renault SA agreed to rescue Nissan, the committee described a corporate culture at Nissan “in which no one can make any objections to Mr. Ghosn”, who was “in a way deified within Nissan as a saviour who had redeemed Nissan from collapse”.

A representative for Ghosn replied in a statement that the allegations made against the former Nissan chairman “will be revealed for what they are: part of an unsubstantiated smear campaign against Carlos Ghosn to prevent the integration of the Alliance and conceal Nissan’s deteriorating performance.”

It also proposed that the majority of directors, including the chairman of the board, be independent, outside directors and that the role of company chairman be abolished.

Responding to the committee’s comments, Saikawa told reporters on Thursday that Nissan would seriously consider the committee’s recommendations, which he characterised as “tough”.

Saikawa, who was speaking outside his home, did not specifically address his responsibility in the scandal but has previously said that top management, including himself, were responsible for weak governance which led to the misconduct.

The recommendations from the external, seven-member committee came weeks after Nissan and Renault said they would retool their alliance, one of the world’s biggest automaking groupings, to break up the all-powerful chairmanship previously held by Ghosn.

“There are facts sufficient to suspect violations of laws and regulations, violation of internal rules and private use of company funds and expenses ... by Mr. Ghosn,” the committee said in its report.

It also singled out Nissan director Greg Kelly, who too has been indicted, for his alleged role in helping Ghosn avoid oversight, and said that Saikawa had signed documents regarding compensation Ghosn would receive after retirement.

“It is clear that there are issues requiring improvement with respect to Nissan’s governance as it could not prevent the misconduct.”

Ghosn, who this month was released on $9 million bail after spending more than 100 days in a Tokyo detention centre, has called the charges against him “meritless”. Kelly has also denied the charges.

“We expect Nissan will take these recommendations seriously and execute them in a swift manner to build the best possible governance structure,” committee co-chair Seiichiro Nishioka told a briefing in Yokohama on Wednesday.

At the briefing, the committee declined to comment on whether other individual directors - including Saikawa - should be held responsible for failing to prevent the alleged actions by Ghosn.

Nishioka also told the briefing that the capital structure between Nissan and Renault was a matter for the companies, and it was not appropriate for the committee to get involved.

The Financial Times reported on Wednesday that Renault intends to restart merger talks with Nissan within 12 months, after which it will set its sights on a bid to buy Fiat Chrysler Automobiles.

The plans signal a return to the strategies supported by Ghosn, who held talks about merging Renault with Fiat Chrysler two to three years ago, the Financial Times story said, citing sources familiar with the matter. It added that the French government had opposed the move.

Saikawa said on Thursday he was not aware of discussions about any possible bid by Renault for Fiat Chrysler.

At the time of his arrest in Tokyo in November on financial misconduct allegations, Ghosn held the chairmanship at Nissan, Renault and Mitsubishi Motors, while also serving as Renault CEO. The automakers together sell roughly 10 million vehicles a year.

Nissan’s board currently comprises nine directors including the chairman, three of whom are categorised as outside, independent directors. Two directors, including one outside director, formerly served senior vice president roles at Renault. After Ghosn, Nissan and Renault retool alliance as ‘equals’
March 12, 2019 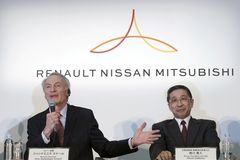