HSBC Holdings PLC beat quarterly profit forecasts and released $400 million it had set aside to cover bad loans caused by the pandemic, as rapid vaccine rollouts in the United States and Britain raise hopes for an economic recovery.

Europe’s biggest bank by assets cautioned, however, that high levels of uncertainty meant it was keeping the bulk of the $3 billion it set aside a year ago to cover potential bad debts.

“We are still being relatively cautious, and we’ve retained about 70 per cent of the reserve build up we did last year,” Chief Financial Officer Ewen Stevenson told Reuters.

HSBC reported on Tuesday profit before tax of $5.78 billion for the three months to March 30, up from $3.21 billion a year ago and well above analysts’ average forecast of $3.35 billion as compiled by the bank.

However, this compared with $6.21 billion in the same period in 2019, showing the lender has some way to go to get back to pre-pandemic profit levels.

HSBC, which makes the bulk of its profits in Asia, said its credit losses for 2021 were likely to be below the medium-term range of 30-40 basis points it forecast in February.

Despite a plan to shift more business to Asia, Chief Executive Noel Quinn said the lender had no immediate plans to move its headquarters from Britain to the region.

London is still “a good place for the head office of an international bank,” Quinn told reporters.

HSBC shares rose 1.7 per cent in London, the best performers in the benchmark FTSE index and reflecting earlier gains in its Hong Kong-listed shares.

“We are more optimistic than we were back in February, we expect GDP to rebound in every economy in which we operate this year,” Quinn told Reuters, citing the successful rollout of vaccines in the United States and Britain as a key factor.

HSBC’s improved outlook and profits paled in comparison to U.S. rival JPMorgan, which earlier this month reported a 400 per cent increase in quarterly profit and released more than $5 billion in bad loan provisions.

That partly reflected the European lender’s heavy reliance on global interest rates to make money, which it said in February it would try to address by shifting to more fee-based business, such as wealth management.

Hibor, the benchmark lending rate in HSBC’s most profitable market of Hong Kong, was near 10-year lows for much of the quarter, and the lender’s revenue overall fell 5 per cent as such low rates compressed income from lending.

“HSBC is not alone in feeling the squeeze of net interest margins, which tightened again slightly over the quarter, but other banks with huge investment banking arms have been able to capitalize on the trading surge over the past year,” said Susannah Streeter, analyst at online investment platform Hargreaves Lansdown.

While HSBC lagged U.S. peers in its performance, it at least avoided losses from the collapse of U.S. investment fund Archegos that blighted European rival UBS’s results.

HSBC had no direct or indirect exposure to Archegos, Quinn told reporters.

HSBC also said it was continuing negotiations for the sale of its French retail banking business, but no final decision had been taken. Reuters reported last month that HSBC had entered negotiations to sell the business, which has 270 branches, to private equity firm Cerberus.

The lender likewise had no update on progress to dispose of its similarly underperforming U.S. retail banking business. 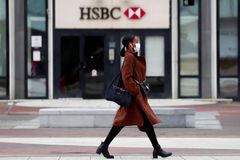