Paul Volcker, who helped shape U.S. economic policy for more than six decades, most notably by leading the Federal Reserve’s brute-force campaign to subdue inflation in the late 1970s and early 1980s, died Sunday in New York. He was 92.

The death was confirmed by his daughter, Janice Zima, who did not specify the cause. Mr. Volcker had been treated for prostate cancer, which was diagnosed in 2018.

Mr. Volcker, a towering, taciturn and somewhat rumpled figure, arrived in Washington as America’s postwar economic hegemony was beginning to crumble. He would devote his professional life to wrestling with the consequences.

As a senior Federal Reserve official from 1975-87, in addition to battling inflation, he sought to limit the easing of financial regulation and warned that the rapid growth of the federal debt threatened the nation’s economic health.

In his last official post, as chairman of president Barack Obama’s Economic Recovery Advisory Board, formed in response to the 2008 financial crisis, he persuaded lawmakers to impose new restrictions on big banks – a measure known as the “Volcker Rule.”

Mr. Volcker interlaced his long stretches of public service with a lucrative career on Wall Street, most prominently as chief executive of the investment bank Wolfensohn & Co.

His reputation for austere integrity also made him a popular choice as an independent arbiter. In one instance, he oversaw the reclamation of deposits that Swiss banks had failed to return to the families of Holocaust victims.

His defining achievement, however, was his success in ending an extended period of high inflation after president Jimmy Carter chose him to be the Fed’s chairman in 1979.

He prevailed by delivering shock therapy, driving the economy into a deep recession to persuade Americans to abandon their entrenched expectation that prices would keep rising rapidly.

The cost was steep. As consumers stopped buying homes and cars, millions of workers lost their jobs. Angry home builders mailed chunks of two-by-fours to the Fed’s marble headquarters in Washington. But Mr. Volcker managed to wring most inflation from the economy.

His victory inaugurated an era in which the leaders of both political parties largely deferred to the central bank, allowing technocrats to chart the course of monetary policy with little political interference.

Ben Bernanke, the Fed’s chairman from 2006-14, kept on his bookshelf one of the chunks of wood that Mr. Volcker received during the anti-inflation campaign.

“He came to represent independence,” Mr. Bernanke said. “He personified the idea of doing something politically unpopular but economically necessary.”

Proud, confident and 6-foot-7 in socks, Mr. Volcker struck many as remote and intimidating. Those who knew him well said the gruff exterior concealed a shy man with a puckish wit. His first wife told a biographer that she had waited vainly for a proposal before she finally asked him if he wanted to marry.

He was famously frugal, favouring drugstore cigars and ill-fitting suits. In the 1960s, when the driver’s seat in his Nash Rambler collapsed, Mr. Volcker propped it up with a chair and continued to drive the car. As chairman of the Fed, he lived in an apartment building populated by George Washington University students and took his laundry to his daughter’s house in the Virginia suburbs.

His time in the national spotlight began in August, 1979. Mr. Carter, struggling to salvage public confidence in his administration, decided to reshuffle his cabinet, plucking the Fed chairman G. William Miller to serve as Treasury secretary. Mr. Volcker, who was then serving as president of the Federal Reserve Bank of New York, was not Mr. Carter’s first choice as a replacement.

Mr. Volcker was known to be frustrated with the Fed’s half-hearted efforts to curb inflation, leading Carter’s aides to warn that he might drive the economy into recession.

Meeting Mr. Carter in the Oval Office, Mr. Volcker slumped on a couch, a familiar cigar in hand, and gestured at Mr. Miller, who was in the room. “You have to understand,” Mr. Volcker said he told the president, “if you appoint me, I favour a tighter policy than that fellow.”

In taking the job, Mr. Volcker strained his finances and his family life.

The job of chairman paid half as much as his post at the New York Fed, and Mr. Volcker’s wife at the time, Barbara Volcker, who struggled for much of her life from debilitating rheumatoid arthritis as well as diabetes, remained in New York to be near her long-time physician. (She died in 1998.) Their son, James, who was born with cerebral palsy, also remained in New York.

When Mr. Volcker arrived in Washington, the national inflation rate was exceeding 1 per cent a month. (By comparison, in 2017 inflation was less than 2 per cent for the whole year.) Rapid and unpredictable inflation encourages spending while discouraging investment, a combination that creates economic instability and, often, political instability.

Many economists still argued that the Fed could reduce inflation gently, without causing a recession, by raising interest rates just enough to slow economic activity. But Volcker said inflation had become a self-fulfilling prophecy. People had come to expect prices and wages to rise, so they borrowed and spent more and demanded larger pay increases, and prices and wages rose.

The Fed had been promising to crack down on inflation for more than a decade, but it had repeatedly caved in to intense political pressure so as to avoid a recession. Volcker decided a dramatic gesture was necessary to convince the public that this time would be different.

“I wanted to move the story at least to the front page,” he told a biographer.

On Saturday, Oct. 6, 1979, Mr. Volcker held an evening news conference in the grand boardroom at the Fed’s headquarters on Constitution Avenue. It was the first time in memory that a Fed chairman had addressed the media, and the Fed’s staff scrambled to gather the press corps.

Pope John Paul II was visiting Washington; when CBS said that it didn’t have a spare camera crew, Mr. Volcker’s spokesman persuaded the network to abandon the pontiff. “Send your crew here,” he told a CBS producer. “Long after the pope is gone, you’ll remember this one.”

Mr. Volcker’s message was that the Fed was declaring war on inflation. “The basic message we tried to convey was simplicity itself,” he said later. “We meant to slay the inflationary dragon.”

To underscore the Fed’s determination, Mr. Volcker announced a significant change in the conduct of monetary policy. Historically, the Fed had aimed to control interest rates – the price of money. Under the new policy, he said that the Fed would instead aim to control the supply of money. Limiting the money supply would cause interest rates to rise, but the Fed would no longer aim for a specific increase. The central bank would determine how much money was available; markets would set the price.

The change was part of a broader shift in economic policy making toward a greater reliance on financial markets. It marked the end of the postwar era in which disciples of British economist John Maynard Keynes had argued that governments could deftly manage economic conditions, including interest rates.

An immediate result was that markets pushed interest rates a lot higher than Volcker had anticipated. The prime rate, which banks charge their most creditworthy customers, nearly doubled by Election Day 1980, peaking at 21.5%. Farmers on tractors circled the Fed’s headquarters. Auto dealers sent the keys to cars they could not sell. “Dear Mr. Volcker,” one builder scrawled on a wooden block with a knothole. “I am beginning to feel as useless as this knothole. Where will our children live?”

Mr. Volcker later confessed to doubts, telling an interviewer in 2016 that he had worn a path into his office carpet while waiting for inflation to surrender. And, early on, he blinked: After tipping the economy into recession in early 1980, the Fed briefly took its foot off the brakes.

But when inflation showed signs of accelerating, the foot slammed back down, and a deeper recession began. Thereafter, Mr. Volcker was obdurate, insisting that the pain was necessary and ultimately worthwhile.

Asked by a reporter how much unemployment he was willing to accept, Mr. Volcker responded, “My basic philosophy is over time we have no choice but to deal with this inflationary situation.”

The harsh Fed policy no doubt contributed to Mr. Carter’s re-election defeat at the hands of Ronald Reagan; he had to campaign when interest rates were at their peak, and before the inflation fever had begun to break. Mr. Carter, in his memoirs, would offer a typically understated assessment: “Our trepidation about Volcker’s appointment was later justified.”

Unemployment rose to a peak of 10.8 per cent in November, 1982 – higher than at any point during the recession that began in 2008 – but by then the benefits of the Fed’s campaign were beginning to appear. Inflation fell below 4 per cent in 1983, and Mr. Volcker’s critics were soon drowned out by a burgeoning chorus of admirers.

Some economists continued to argue that the Fed could have brought inflation under control more gently. Alan Greenspan, Mr. Volcker’s successor as Fed chairman, later described the policy as an excess of necessary medicine, although he added that it had been preferable to not doing enough.

In retrospect, it has also become clear that the developed world was on the cusp of an era of declining inflation, arriving as a result of the globalization of manufacturing and capital markets.

But Mr. Volcker’s triumph was undeniable: Inflation has remained under control ever since.

“Paul was as stubborn as he was tall,” Mr. Carter said in a statement on Monday morning, “and although some of his policies as Fed chairman were politically costly, they were the right thing to do. His strong and intelligent guidance helped to curb petroleum-driven inflation, easing a strain on all Americans’ budgets.”

Mr. Volcker married Barbara Bahnson in 1954. After her death, he married Anke Dening, his long-time assistant, in 2010. Besides her and his daughter, he leaves his son, James, and four grandchildren. 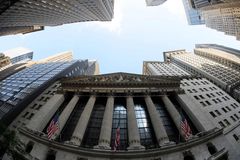 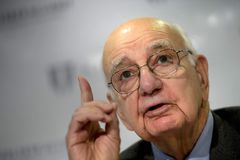