You can scarcely go out the door in California without bumping into a Zen master or meditation practitioner. And yet, when it came to choosing a voice for one of the world’s most popular mental wellness apps, the founders of San-Francisco-based Calm.com Inc. turned to a Torontonian. Downloaded 30 million times, the Calm app relies on the tranquil tones of Tamara Levitt, 46, who writes, produces and narrates its mindfulness and meditation sessions.

Ms. Levitt has held the title of head of mindfulness content at the app since November, 2014, and has an equity position in the company (although she won’t share the financial details). She records her sessions for Calm at a studio on Queen Street West, and since she joined the team, subscriptions have grown from 22,500 to 1 million. Subscribers pay US$60 a year to access the app’s content.

Ms. Levitt, who smiles widely and has an unassuming manner, arrives in a leafy grotto in Toronto’s High Park – a place that has long been her go-to for reclaiming her own sense of inner calm. “My life tends to be very busy, so creating some balance by taking time to enjoy the beauty and stillness of nature is rejuvenating,” she says.

She appears composed and confident now, but Ms. Levitt admits that has not always been the case. “I had a difficult and complex relationship with my father,” she says. “I grew up without a strong sense of safety and stability.” She coped by channelling her inner angst into music and acting. “From the time I was really young, I was singing and writing music,” she says.

At 12, Ms. Levitt began a professional career on stage. By 14, she had developed anxiety, depression and a full-blown eating disorder, fuelled in part by the ballerina body type admired at her performing arts high school.

An eight-week mindfulness and meditation course she took through Sheena’s Place (a treatment centre for eating disorders in Toronto) deserves some of the credit for her recovery. “Mindfulness helped me deal with stress and anxiety and find some space for myself,” Ms. Levitt says. “Instead of getting swept up in what was going on in my life, I was able to step back and gain some perspective.”

Ms. Levitt continued to explore the practice, even as she struggled – with mixed success – to build a career in the arts. Ultimately, she gave up both acting and music completely in her mid-20s, largely because “I put an immense amount of pressure upon myself to succeed,” she says. “When I wasn’t commercially and financially successful by age 25, I felt like a failure.”

In retrospect, she would tell her “younger self to change her relationship with music” rather than simply throw in the towel. Instead, Ms. Levitt launched a new career.

This time, she built on her continuing interest in meditation and mindfulness by developing sessions for corporations, as well as producing short films, television properties and books on mindfulness. The only problem: She found working on her own difficult. “It was always a roller coaster,” she says. “At times, it looked like everything was great and it was all coming together, and then there would just be quiet.”

So in 2014, she reached out via e-mail to Calm’s co-founders, Alex Tew (who made his first US$1-million as a 21-year-old student with a fundraising site called Million Dollar Home Page) and Michael Acton Smith (creator of online children’s game Moshi Monsters). “I felt I needed a change,” Ms. Levitt recalls. “I wanted stability and to be working with other people on something that I felt passionate about.”

After viewing some of the sample content Ms. Levitt produced, Calm’s founders were sold. “It was immediately clear she was the perfect person,” Mr. Tew says. “She is incredibly talented, not just as a teacher of mindfulness, but also as a writer, entrepreneur and all-round amazing human being. She been absolutely essential to the success and growth of Calm.”

In contrast to what the app is intended to achieve for others, Ms. Levitt admits her first few years with the company were crazy busy. The app had only four employees when she signed on, and she was responsible for all mindfulness and meditation content, including the Daily Calm, a popular daily 10-minute guided-meditation session. She continues to find her work tremendously rewarding, however. “I feel as if all the separate threads of my career have come together."

In 2017, Calm ranked as the fifth-most-commonly downloaded health and fitness app on Google or IOS in the world (up from 16th place in 2016), according to Lexi Sydow, market insights manager at App Annie, which produces analytics on the app industry.

The Calm app currently offers English programming only. But this spring’s influx of US$27-million in venture capital led by Insight Venture Partners (which gives the company a valuation of US$250-million) should enable Calm to grow further afield. “Translating Calm into other languages is a big priority for us,” says Mr. Tew, “as is increasing our marketing initiatives around the world.”

Calm’s staff has grown along with it – totalling 36 currently. Although Ms. Levitt still produces most of its mindfulness and meditation content, others hold responsibility for producing “sleep stories” (designed to help people doze off) and “master classes” on subjects such as creativity and breaking bad habits from celebrities such as Elizabeth Gilbert, author of Eat, Pray, Love, and Judson Brewer, a renowned psychiatrist specializing in self-mastery. That gives Ms. Levitt more time to focus on her own projects, including The Secret to Clara’s Calm, a children’s book published last year aimed at helping kids handle their emotions.

Ms. Sydow sees the success of meditation apps such as Calm and its larger competitor, Britain-based Headspace Inc., as an indicator “users are deriving value from these features.” Even better, “they are willing to pay for it,” she says, “which is a huge testament to the success of both Calm and Headspace as well as the cultural mindset toward wellness.”

Still, there’s no doubt Ms. Levitt’s refreshingly non-preachy, dogma-free approach to mindfulness and meditation is part of Calm’s winning formula. “A lot of our users feel like they have a relationship with me, because they’re listening to me every day and I try to share from a really authentic place,” Ms. Levitt says. “I’ve never professed to know everything or to have it all together in my life. It’s not as if I have no struggles and I’ve reached enlightenment. I’m on this path like everyone else.” 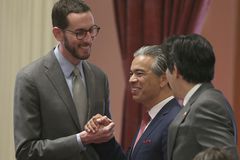