New entrepreneur Shaun Baid is feeling excited about his prospects these days. Mr. Baid, a Calgary accountant who was laid off last year amid the energy sector downturn, is now working with three partners to open a cannabis retail store.

“It’s super exciting times, all across the country, but especially here in Alberta,” said Mr. Baid, chief financial officer of Kush Collective. “It feels like Alberta is where this whole gold rush is going to happen.”

That’s because Alberta’s NDP government has adopted a private model for cannabis retailers, following in the footsteps of the province’s private liquor retail model. (Online cannabis sales will be government-run in Alberta.)

In preparation for the federal government’s legalization of marijuana later this year, other provinces, like Ontario and Quebec, have announced government-operated storefronts, or, as is the case in British Columbia, a mix of government-run and private shops.

By May 8, just over two months after the Alberta Gaming, Liquor and Cannabis Commission (AGLC) started accepting applications for retail licences, it had received 533 applications.

Neighbouring Saskatchewan has also opted for a private model, with a limit of 51 retail cannabis permits available. No cap exists in Alberta, but no single person or entity can hold more than 15 per cent of retail licences in the province.

Mr. Baid and other prospective retailers face a comprehensive application process that includes background checks, upfront fees and municipal approvals, which vary from place to place. In Calgary, for example, a development permit, building permit and business licence are required.

But for Mr. Baid, the biggest challenge so far has been securing real estate. As Alberta’s private retail model woos entrepreneurs and bigger businesses from across the country, Mr. Baid found some landlords wouldn’t deal with a small firm like his seeking one bricks-and-mortar store.

Toronto cannabis retailer Fire & Flower relocated its headquarters to Edmonton in February. Fire & Flower has applied for 37 cannabis store licences in Alberta, the maximum currently allowed, and plans to open stores in every province where private shops are permitted.

“Alberta has created a very clear and concise environment, which allows investors, organizations, and retailers to have a level of understanding that is sometimes in flux in other provinces across Canada,” Mr. Mison added.

Mack Andrews, vice-president of the Alberta Cannabis Collective, thinks Alberta is positioned to be a leader within Canada’s retail cannabis market — and beyond. “What I really see is Alberta setting a worldwide standard that could be adopted in other jurisdictions as they legalize in the future,” he said.

The Alberta Cannabis Collective plans to represent cannabis retailers across Alberta who go beyond industry base requirements and meet the collective’s higher safety standards. The new organization is also partnering with other businesses, like law firm Blake, Cassels & Graydon LLP, to offer services to its future members.

Mr. Andrews said Alberta stands out because of its private model, combined with an available workforce. “With the way the oil and gas industry has gone over the past couple of years, there’s a lot of really talented, educated people in Alberta who are looking to transition or are already out of that industry and looking for new things,” he said.

In fact, Mr. Andrews himself previously worked in the oil and gas sector as a chemical engineer before becoming an entrepreneur. He has applied to open a retail cannabis store in Calgary.

As legalization looms, other local entrepreneurs are looking to grow their businesses. Jeff Mooij is president of 420 Clinic, the first licensed medical cannabis clinic in Calgary, which also operates a Lethbridge location.

He plans to sell recreational cannabis throughout Alberta under the name 420 Premium Market, and has applied for more than 20 retail licences. Mr. Mooij has also been involved in various government consultations around legalized marijuana.

“We really worked hard to try and educate not just city council members in the city of Calgary, but the province too, on making sure that we do this properly, that we’re not punishing our industry for [people’s] own stigma and beliefs. And everybody inherently has them, because this has been illegal for so long,” he said.

With that work done, Mr. Mooij is now gearing up for what could be a very rapid expansion. “It’s complete insanity when I look at the fact there’s a possibility within four months, we might have increased our staff level by 400 people,” he said.

Lindsay Blackett, president of the Canadian Cannabis Chamber, thinks the Alberta government has done a good job of setting up a regulatory framework for legal cannabis that gives certainty to would-be businesses.

A former Alberta culture minister, Mr. Blackett isn’t the only former politician involved in the new national organization, based in Calgary. Jonathan Denis, Alberta’s former minister of justice and solicitor-general, is also on the chamber’s team.

Mr. Blackett sees plenty of opportunities for businesses in Alberta’s marijuana market, including in retail, production, and — when legalized — edible products. Alberta’s low tax regime and cost of electricity are particularly attractive to potential producers, Mr. Blackett said. Health Canada has issued licences for six cannabis producers in Alberta, compared to 57 in Ontario.

“Right now there’s a lot of excitement around the retail applications,” Mr. Blackett said. “But we think that the best is yet to come in Alberta.”

Keep up with the latest entrepreneurship news by signing up for the free Report on Small Business newsletter. globeandmail.com/newsletters 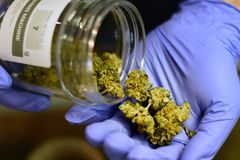 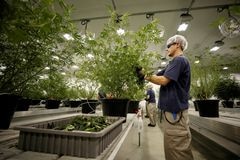