Justice Suzanne Bensler says she will likely have a verdict next month in the case of a Calgary man charged with murdering his four-year-old daughter in 2014.

The lawyer for 44-year-old Oluwatosin Oluwafemi said in closing arguments Thursday that Olive Rebekah’s mother could be responsible for her death.

Defense lawyer Rebecca Snukal pointed to testimony from the girl’s mother, who said she would sometimes physically discipline her daughter.

Crown prosecutor Donna Spaner says that although there’s only circumstantial evidence in the case, common sense makes it clear that the man killed his daughter.

The trial heard that Oluwafemi called his wife at work on December 14, 2014, and she rushed home to find him performing C-P-R on their daughter.

A paramedic testified he arrived 20 minutes later and found the girl unconscious, not breathing and in cardiac arrest.

The paramedic said he received no explanation from the people in the home about what happened. 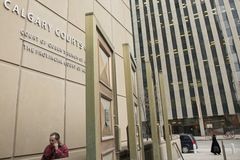