The 35-year-old Saskatchewan farmer hasn’t lost the joy the game provides and he loves playing recreationally. He understands hockey and knows that coaching is about more than telling players what to do – it’s about helping them become better people.

He says that two years ago, he imagined himself having moved onto the Western Hockey League by now, or working as a head coach in the Saskatchewan Junior Hockey League.

That day, the assistant coach of the Humboldt Broncos junior hockey team was driving behind a bus full of players and staff on their way to a playoff game when a semi-truck blew through a stop sign on a rural highway northeast of Saskatoon.

The truck barrelled into the path of the oncoming bus. Sixteen people were killed and 13 injured. Mr. Beaudry considered them his sons and friends.

To cope with the aftermath – the shock, triggers and grief – he sought help from a naturopath and homeopath. He started listening to books about mindfulness, which led him to start a grief-sharing group.

“I’m definitely a much different person … more in tune with my health, my mental health, spiritual health.

“Those are the things that I find important.”

Helping people matters a lot to Mr. Beaudry. He says it’s why he shares his story through public speaking, as well as in the new book MENtal Health: It’s Time to Talk, written by a Saskatoon mental-health advocate. A book launch was to be held Wednesday night in Saskatoon.

As a father of three young children, Mr. Beaudry says he might return to coaching hockey for their sake. But for now, public speaking offers him a bigger platform to help a wider audience.

“If I’m coaching to just help people, then I’m limiting myself to the amount of people I can help.”

The Broncos collision is only part of Mr. Beaudry’s story about healing. As a teenager and throughout his 20s, he used booze – and at times cocaine and meth – to silence feelings of unworthiness. He also got hooked on pain pills.

He got sober at 29 through Alcoholics Anonymous. Relapsing became a real risk after the deadly crash.

“There were times where I thought I was going to end up using again,” Mr. Beaudry says. “I decided I didn’t want to feel the way I did anymore. I was so filled with anger.”

It took him about a year to let go of the anger he felt, he says. He carries on now believing that life should be lived in the moment instead of fixed on the future.

Forgiveness also played a pivotal role in where he’s at today.

Mr. Beaudry attended the sentencing hearing last year for the rookie truck driver who caused the cash, Jaskirat Singh Sidhu. Mr. Beaudry described how he helped identify the bodies after the crash and was left traumatized. But he told Mr. Sidhu that he forgave him.

“Until I forgive myself and love myself, then I’m not going to forgive others or love them either.” 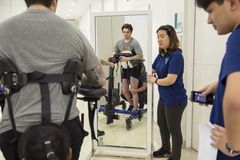 Paralyzed survivor of Humboldt Broncos crash ‘at a loss for words’ over progress since spinal surgery
December 2, 2019 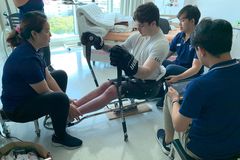