Three small cabins stand next to Lamprey Creek in northern British Columbia, built by Wet’suwet’en Nation members and their supporters over the past year.

The structures occupy the site of a former Indigenous village site where Wet’suwet’en people lived and fished for centuries before the area became a recreation site for campers and anglers, according to Molly Wickham, a member of the nation whose hereditary name is Sleydo’.

But the site is also close to spots where, one year ago, RCMP officers arrested protesters challenging the construction of the Coastal GasLink pipeline.

The cabins are part of an effort to encourage Indigenous people to live on their territory in accordance with traditional laws, said Ms. Wickham, who has taken a lead role in opposing the pipeline.

To Ms. Wickham, it’s not up to individual Wet’suwet’en members to dictate the pipeline’s fate. A decision has been made under traditional law; it must be respected. “Our hereditary chiefs, as our clan governance system, collectively have made their decision,” she explained. “The decision has been made, and now we have to uphold it.”

But as the structures were put in place, construction also continued on the $6.6-billion pipeline, which will transport natural gas from northeast B.C. to LNG Canada’s $18-billion export terminal being built in Kitimat, B.C.

The Coastal GasLink dispute put a spotlight on Indigenous governance, highlighting the differences between the system imposed under the Indian Act of elected chiefs and councillors, and hereditary systems such as those of the Wet’suwet’en, where many of the leadership positions are handed down through families.

The elected band councils of 20 Indigenous communities along the Coastal GasLink route – including five Wet’suwet’en bands – have agreed to support the pipeline.

But the Office of the Wet’suwet’en, a non-profit society that represents hereditary chiefs, counters that elected Indigenous leaders don’t have jurisdiction over the Wet’suwet’en’s traditional, off-reserve territory.

Installation activities on parts of the Wet’suwet’en territory, including along a logging road near Houston, B.C., lag behind other sections. Still, more than one-quarter of the pipeline’s total construction is already complete.

GASLINK; OFFICE OF THE WET’SUWET’EN

CONTRIBUTORS; COASTAL GASLINK; OFFICE OF THE 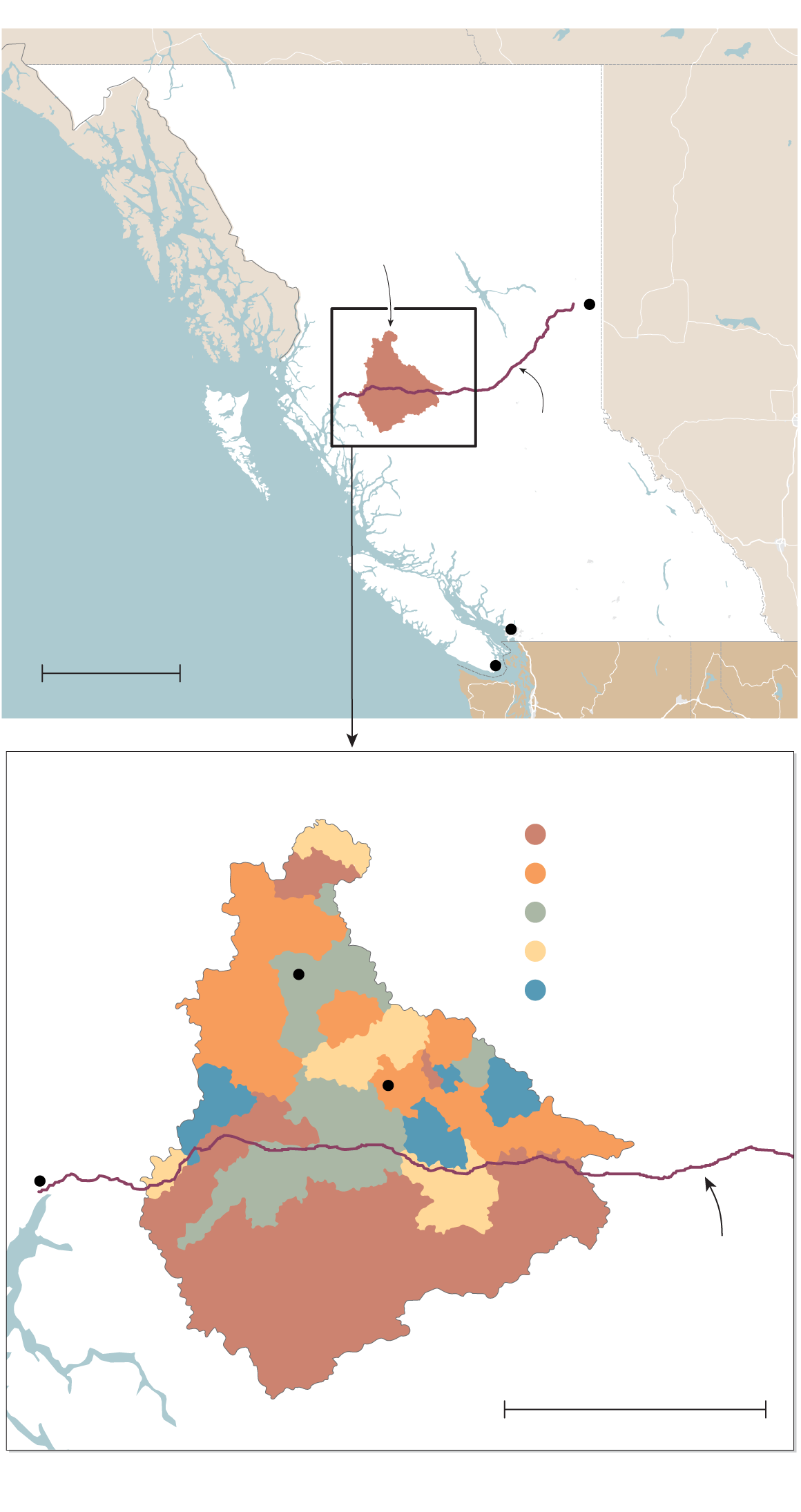 COASTAL GASLINK; OFFICE OF THE WET’SUWET’EN

The dispute over the pipeline remains unresolved. Yet, the hereditary chiefs and the B.C. and federal governments did reach a pact on Feb. 29, 2020, which recognized Wet’suwet’en rights and title, while also setting out a process designed to see the group assume control over issues such as child welfare and land use.

The agreement didn’t include the Coastal GasLink dispute. Nonetheless, that agreement has likely given momentum to efforts to reclaim and revitalize traditional governance systems, according to John Borrows, who holds a Canada Research Chair in Indigenous Law at the University of Victoria.

That push gained more force because of the unexpected challenges of COVID-19. For First Nations, the pandemic highlighted long-standing problems in many communities, including overcrowded housing, boil-water advisories and limited access to health care. It also resulted in First Nations asserting their authority.

“In the past 10 to 12 months, First Nations have had to enact law – from protecting their communities with checkpoints, and having a set of criteria as to when people can and can’t go in and organizing their affairs, to creating food banks in the community and helping elders,” Prof. Borrows said.

“You know, there’s been hiccups along the way. But this is a huge exercise of self-determination.”

Other Indigenous groups have found a way to reconcile hereditary and elected leadership, and bridging the gap can open the door to co-operation.

For one example, the Heiltsuk First Nation, located on B.C.’s central coast around Bella Bella, signed a memorandum of understanding (MOU) in 2002, since updated, that outlines how hereditary and elected leaders can work together. “We work together through that MOU to help make decisions on behalf of our people,” said Heiltsuk hereditary chief Harvey Humchitt, whose hereditary name is Wigvilba Wakas.

That co-operation helped shape the Heiltsuk response when the tugboat Nathan E. Stewart, and an accompanying barge, ran aground near Bella Bella in October, 2016. The tug sank after its hull was breached, releasing about 110,000 litres of diesel oil. Heiltsuk members were first on the scene and the nation has since pushed for greater marine protection.

The nation opened a new big house for community gatherings in 2019 and is now drafting a constitution that will incorporate its traditional laws into a modern document.

Governance took on new urgency during the pandemic, as Heiltsuk elected chief councillor Marilyn Slett emerged as an important voice among Indigenous leaders calling for increased safeguards to protect remote, vulnerable communities from COVID-19. The Heiltsuk cracked down on travel to their territory, telling boaters and tourists not to come, joining other First Nations in imposing travel restrictions. A group of B.C. First Nations, including the Heiltsuk, announced an agreement this month with the provincial government to share information about COVID-19, after the Indigenous groups pushed for more information about cases in or near their communities.

“We will never forget this year and everything that our leadership has been doing to try to keep our communities safe,” Ms. Slett said. “Because as Indigenous people, we know the history of pandemics.”

The Squamish Nation, based in southwest B.C., took a different governance route. It moved away from hereditary leadership when it voted in 1976 to support its elected system, which took effect in 1981. The Squamish Nation’s elected band council has jurisdiction over both on-reserve and off-reserve issues.

“For me, it’s not about whether I support hereditary or elected systems. I support the people and their rights,” said Khelsilem, an elected Squamish Nation councillor who goes by his traditional name.

In 2018, the federal Liberal government announced a Nation Rebuilding Program, a $100-million, five-year effort to support Indigenous groups in “rebuilding their governance structures on the path towards self-determination,” according to a government release. First Nations might use such funds to develop a constitution or plans to reconcile hereditary and Indian Act systems.

The high profile of the Wet’suwet’en pact likely emphasized the need for governance reform, according to Prof. Borrows, who is Anishinaabe/Ojibwa and a member of the Chippewas of Nawash First Nation in Ontario.

“The media spotlight itself and the negotiations and the ongoing need, from the company’s point of view, to put the pipeline through, continues to create incentive for people in that particular area to talk to one another,” he said.

As negotiations between the Wet’suwet’en, federal and provincial governments continue, equipment and workers are still a presence in the Indigenous group’s territory, and so are regular RCMP patrols.

In taking their position, hereditary chiefs and their supporters often cite a landmark 1997 court ruling. The Supreme Court of Canada case, known as Delgamuukw, established rights and title for the Wet’suwet’en and neighbouring Gitxsan. The decision, however, left the question of boundaries to be settled, either through a future court case or negotiation. A subsequent court case has not taken place and, until last year, negotiations had stalled.

As the question of rights and title lingered, industrial development projects proceeded.

Calgary-based TC Energy Corp. owned all of Coastal GasLink until last year, when it completed the sale of a 65-per-cent stake in the pipeline venture to Alberta Investment Management Corp. and KKR & Co.

TC Energy now owns 35 per cent of the project. “Whether elected or hereditary, Coastal GasLink has the utmost respect for Indigenous systems in British Columbia and we strive to engage with all Indigenous groups,” TC Energy spokeswoman Suzanne Wilton said in a statement.

TC Energy plans to release a “reconciliation action plan” within months to underscore its commitment to Indigenous groups, she said. The goal is to finish construction by late 2023, and start testing the pipeline in 2024 in order to supply natural gas to the Shell-led LNG Canada project in Kitimat.

Coastal GasLink’s 670-kilometre route crosses about 190 kilometres of the Wet’suwet’en’s traditional territory, including the area near the Unist’ot’en camp. Located at kilometre 66 of the logging road, roughly 20 kilometres from where the three cabins are now located, Unist’ot’en has become the physical and symbolic focal point for the anti-pipeline campaign.

As pipeline construction has continued, so have talks related to the governance agreement. But those discussion have been hobbled by pandemic restrictions that have ruled out feast hall gatherings that are a cornerstone of Wet’suwet’en culture.

The uneasy quiet is a marked contrast to February, 2020, when RCMP conducted raids to enforce a B.C. Supreme Court injunction obtained by Coastal GasLink to gain access to work sites. Over a five-day period, police arrested 28 people to clear several sites on the logging road.

The conflict triggered a wave of cross-country protests, including a sit-in at the B.C. legislature in Victoria, rail blockades in Ontario, Quebec and B.C. and demonstrations at the Port of Vancouver.

Resolving internal conflicts is important, and it should ultimately be left to Indigenous people to determine their own path because political structures that operate efficiently will create economic and cultural benefits, Khelsilem said.

“If the people want to express their rights as we want a hereditary system only or we want an elected system only, or we want both or we want something else, I support that,” he said. “It fundamentally is about the principle of respecting the rights of the people, the collective.” 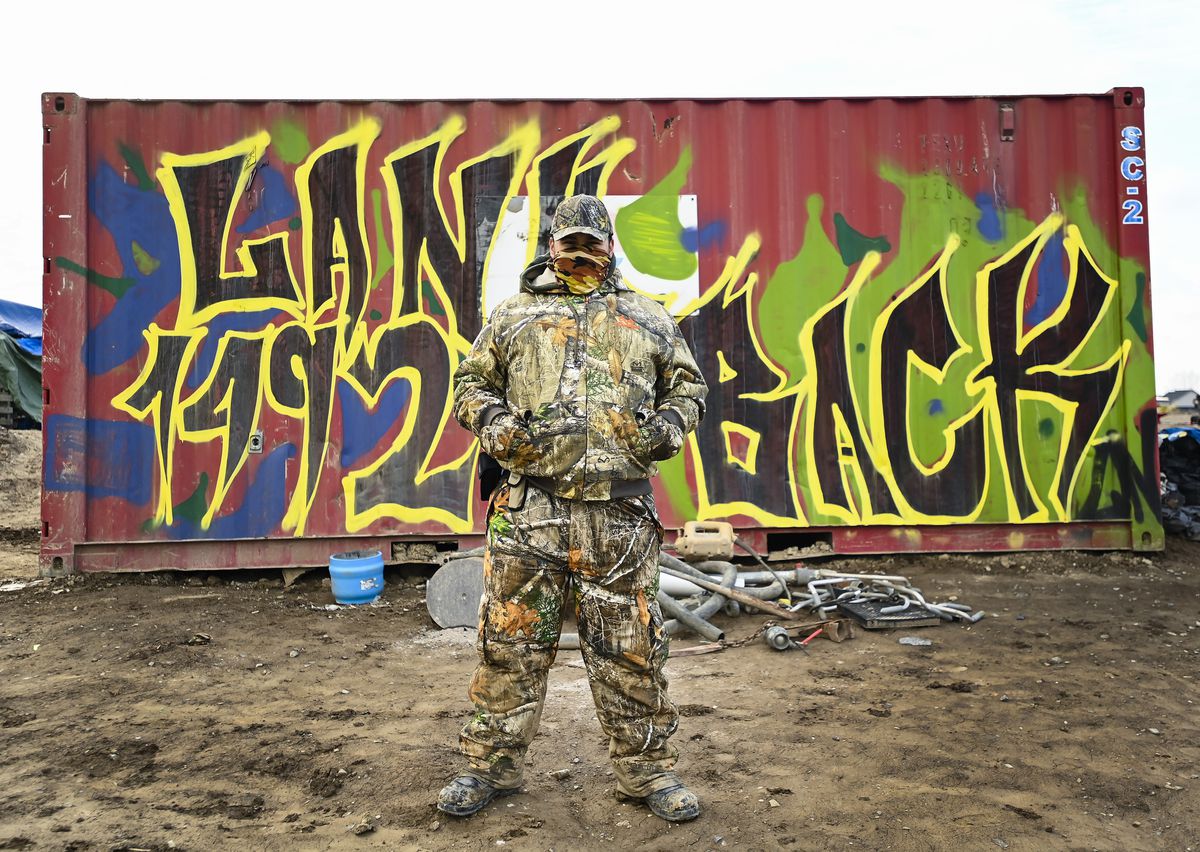 Opinion: ‘Land Back’ is more than a slogan

Instead of negotiating land surrenders in exchange for one-off payments and promises, this movement aims to put unceded land back under Indigenous control, Kanahus Manuel and Naomi Klein write.