Finance Minister Joe Ceci says Alberta is banking on anticipated revenue from an expansion of the Trans Mountain oil pipeline to balance the budget within five years.

Ceci says revenue from the yet-to-be built expansion, along with expected revenue from a replacement Enbridge pipeline to Wisconsin, will be factored into forecasts in the budget he is to table on Thursday.

He says it makes financial sense to include the pipelines now –given the expectation they will get completed – and the figures can be adjusted as the situation develops.

“That is definitely the hopes of the companies that are involved,” Ceci said Tuesday. “We’ve built (the revenue) into budget because that’s what everybody believes will happen.”

In 2016, the federal government approved the Enbridge Line 3 replacement to Wisconsin, as well as Kinder Morgan’s Trans Mountain expansion, which would triple the amount of crude shipped from Edmonton to the port at Burnaby, B.C.

But the Trans Mountain expansion is facing delays and challenges.

B.C. Premier John Horgan is asking for a legal ruling on whether his province can restrict higher levels of oil from coming into B.C. while his government reviews oil-spill safety measures.

Alberta Premier Rachel Notley has said Trans Mountain is critical to Canada’s energy future and she plans to introduce legislation in the coming weeks to give her the power to curtail oil shipments to B.C. in retaliation.

She has said that pipeline bottlenecks and limited access to overseas markets are forcing Alberta’s crude to sell at a discount, costing thousands of jobs and leaving billions of dollars of profit on the table.

“We obviously hope that Trans Mountain gets built quickly, but what we’ve seen is a year of delays already and the very strong potential of yet further delays,” Kenney said.

“This is putting a lot of eggs in one uncertain basket, and that’s not how you budget.”

Ceci made the pre-budget announcement at a downtown tech startup company that creates virtual simulations for proposed homes and work sites.

Finance ministers traditionally get new shoes prior to budget day. This year, Ceci stood next to a screen displaying a computer-generated avatar of himself in loafers that toggled from shimmering electric green to dark purple to traditional black and grey.

He said the budget will continue with key NDP themes, but will include a detailed plan to balance the books.

“The budget is going to be balanced in 2023,” said Ceci. “We are focused on constraining expenditures (and) costs down the road, eliminating ... waste where we find it, and diversifying our economy.”

The government won’t make deep cuts to balance the budget earlier, he said. This year’s deficit is pegged at $9.1-billion.

Kenney said a plan tied to the mercurial ups and downs of oil prices is not a plan.

“He (Ceci) has put on those virtual reality goggles and he can’t see clearly,” said Kenney. “He seems to be counting on good luck to get the budget balanced.”

Notley took over in 2015 as oil prices, the wellspring of Alberta’s economy, were falling by half from previous highs of more than US$100 a barrel. Oil prices have inched up since then, but Notley’s government has avoided deep cuts to programs and services, saying that would worsen the economy. 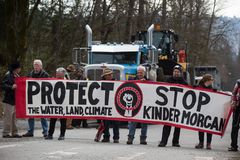 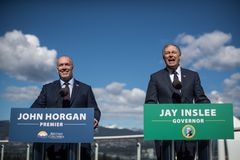