Alberta’s decision to switch thousands of government-insured patients to less-expensive versions of drugs called biologics is being greeted with alarm by some gastroenterologists and patient groups who fear the policy could hurt patients.

But rheumatologists and representatives of patients with inflammatory arthritis are welcoming Alberta’s plan to save hundreds of millions of dollars by promoting the cheaper alternatives, known as biosimilars – so long as the province’s United Conservative Party government carefully manages the transition for patients.

Reactions to the biosimilars initiative that Alberta Health Minister Tyler Shandro unveiled on Thursday were split, with the strongest opposition coming from some leading gastroenterologists and from Crohn’s and Colitis Canada, a national charity and advocacy group.

“We’re extremely disappointed,” said Mina Mawani, the chief executive officer of Crohn’s and Colitis Canada. “We think that Minister Shandro has been very short-sighted and that this could be a very potentially harmful policy.”

Biologic medications – which are complex drugs produced from living organisms – have dramatically improved the treatment options for some chronic illnesses, including rheumatic diseases and inflammatory bowel diseases.

But the high-priced drugs have also put a strain on provincial drug budgets across the country. Alberta alone spent $238-million on biologics in 2018-19, up from $21-million a decade earlier.

Biosimilars are cheaper near-copies of biologic medicines whose patents have expired.

Mr. Shandro announced on Thursday that, as of July 1, 2020, approximately 26,000 patients will have to switch to the biosimilar versions of their biologic drugs, including Remicade, Enbrel and the long-acting insulin, Lantus.

The policy, which is expected to save between $227-million and $380-million over four years, makes Alberta the second province after British Columbia to mandate biosimilar use for patients who rely on the government to pay for their drugs.

John Esdaile, a rheumatologist and the scientific director of Arthritis Research Canada, said that in B.C., where he practises, the transition to biosimilars has been smooth and problem-free.

“In changing my own patients to a biosimilar, I was struck by how many said, ‘Well, if it’s really just as safe and just as good, I’m so glad I’m saving the government money,’” Dr. Esdaile said, speaking alongside Mr. Shandro at a news conference.

There are many more biologic drugs available for the treatment of rheumatoid arthritis than there are for inflammatory bowel diseases – which is one of the reasons doctors and advocates from each disease group reacted so differently to Alberta’s plan.

The efficacy of biologic drugs can wane over time, meaning patients often need to cycle through many different drugs. Inflammatory bowel disease patients who fear biosimilars won’t work as well have fewer other drugs to choose from.

Along with Dr. Esdaile of Arthritis Research Canada, Suzan Valenta, the executive director of Prairie/Nunavut/Northwest Territory section of the Arthritis Society, also appeared at the news conference to endorse Alberta’s plan.

Nobody representing patients with inflammatory bowel disease spoke at the event.

Most of the Crohn’s and ulcerative colitis patients affected by Alberta’s policy will be switching away from Remicade, an intravenous medication that is delivered primarily in private clinics sponsored by pharmaceutical companies.

The Alberta government spent as much as $91.2-million on Remicade in 2018-19, more than it spent on any other drug by far.

According to a forthcoming paper to be published in the Journal of the Canadian Association of Gastroenterology, there are 47 infusion clinics across Alberta, but 24 have exclusive deals with Janssen Inc., the unit of Johnson & Johnson that makes Remicade. The contracts prohibit the clinics from infusing biosimilar alternatives.

But the ministry disputes the association’s numbers, saying there are 39 sites where the biosimilars will be available.

“Do we have the capacity to handle all these patients who are going to be flooding all of these infusion clinics, which are going to be less in number?" said Gilaad Kaplan, a gastroenterologist, professor at the University of Calgary and a scientific adviser to Crohn’s and Colitis Canada.

“What I don’t understand is, why do we have to do this now? Why not wait until we get the experience from B.C. ... Let’s make sure we get it right.”

Alberta’s new policy has a wrinkle that could put even more pressure on existing infusion clinics.

For some patients starting biologics for the first time or switching away from a biologic that has stopped working, a new tiered framework means they will have to try cheaper biologic or biosimilar options first.

For Crohn’s patients, that means they will first have to try one of the two Remicade biosimilars or another IV drug called Entyvio before they are allowed to access public coverage of Humira, a treatment patients can self-inject, allowing them to skip infusion clinics altogether. Government-insured patients currently taking Humira will be allowed to keep taking it.

Mr. Shandro also urged opponents of the plan to think of the other sick Albertans who could be helped with money saved through the biosimilars initiative.

“This isn’t just about dollars,” Mr. Shandro said. “It’s about other people’s care.”

Alberta will force patients to switch from biologics to cheaper biosimilar medications
December 12, 2019 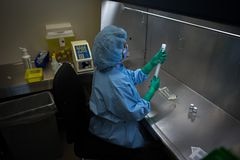